Last I checked, an article I wrote about Ted Bundy and feminism had been read nearly ten thousand times and was still bringing in hundreds of views a day.

First, let's party - it's by far my most-read piece ever, including fiction, and that's fucking amazing. Second - I think I inadvertently became "the serial killer chick." 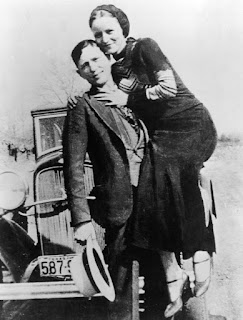 My most read nonfiction is all at Dirge Magazine and it's been a great place to publish.  The first piece of mine they ran was On Love, Sex, and Murderers. The piece was about the women who suffer from (or enjoy living with?) the paraphilia known as hybristophilia. You may have heard it called "Bonnie and Clyde syndrome." The more violent, detestable, and terrifying a man is, the more sexually attractive they are to these women. It's a strange phenomenon and one I thought spoke to something in our culture worth discussing. Moving it to Dirge definitely got it in front of more eyes, and as a result I had a lot of people wanting to know more. Hell, I wanted to know more.

That's how I deal with weird, dark, horrible shit - I research the hell out of it. Somehow knowing more makes me feel better. Around the time I was attempting to get a few of these women to do an interview with me (with no dice) Slate published an irresponsible and inaccurate article on the James Holmes fangirls that seemed to speak to the reasons many women gave for not speaking to people like me. Without a woman to interview, and feeling a bit "scooped," I decided to make my sequel a direct response to Slate, and take a moment to clarify that the women involved in the online hybristo communities may be living with an incredibly dark and unimaginable paraphilia, they are not freaks to be infantilized and laughed at.

If we fast forward a bit, we land here - me with a Ted Bundy article that's taken on a life of it's own. Don't get me wrong, I'm happy this article is reaching people and I'm thrilled that what I was trying to say is relevant enough for this kind of success, but it does leave me wondering "what now?"

I've always enjoyed reading about serial killers. It's a topic I find endlessly fascinating, and through my research I've stocked up even more interesting facts and strange perspectives on the topic of men and women who kill. Is this my specialty? It's a funny thing to think about. I wasn't writing nonfiction with any regularity a year ago. I didn't enjoy it and I had zero confidence. Somewhere along the line, though, I've found a voice, and that voice seems most at home when talking about serial killers, or, at least, spectacularly violent crimes. A part of me wants to dig deep and find a pitch that goes far away from the work I've done on serial killers and similar crimes, but the other part of me still wants to know more.

It does seem a little pretentious and even pre-emptive to worry about finding a niche or escaping one, but what are writers if not pretentious and neurotic? My first blog here was about the spectacularly violent crimes that made up my high school years in Central California, my most read pieces are about children attempting to murder their friend, serial killers, and women who want to have sex with serial killers. It's an odd place to be comfortable.

But I am comfortable. Not so comfortable that I am complacent or lack a challenge, but comfortable in the knowledge that I'm examining something that matters - and I think I'm doing it in an interesting way.

So, yeah. Maybe I am the serial killer chick.