Some Great Reading for Halloween!

Not a lot happened here at the home offices of Quadrant Fiction Studio this week. I'm missing out on many of the Bouchercon events this week. It's great to see all the photos. I guess the biggest thing is happening this week is the upcoming release of Weird Menace Volume 1 from Rough Edges Press. Those who don't know, this is the publishing arm of James and Livia Reasoner. Here's the cover of volume 1: 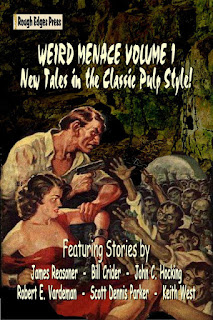 And here's the image for volume 2 which comes out a few weeks after volume 1: 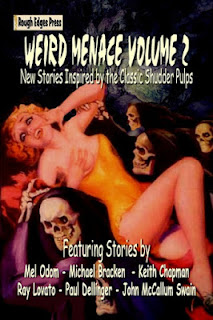 I have a story that's coming out in Volume 1. It's called "The Curse of the Monster Makers!" James sent me my draft earlier this week and asked me to review it for typos and anything else that needed to update. As I mentioned last week, I have a problem with titles. The title — which is awesome — is entirely from James himself. So thanks James! I look forward to reading the rest of the stories in Volume 1 and Volume 2 during this fun Halloween month.

Speaking of covers, I'm prepping the second Benjamin Wade book for publication and I need a cover. I have a lot of old paperbacks and most them have actual painted art. But there was a time, probably in the late 1950s or early 1960s, when cover art became a little more minimal. I'm thinking of the paperback versions of the James Bond novels were there was only one picture on the entire cover. Also the Michael Shane novels by Brett Halliday--at least the Dell additions that I have--didn't always tried to illustrate a scene from the story. Instead, the covers showed a couple of images that gave you the idea. Currently the book is titled ALL CHICKENS MUST DIE. And instead of going in the painted scene category (like I did with WADING INTO WAR and THE PHANTOM AUTOMOBILES), I'm trying the minimal approach. Here's what I've come up with so far. 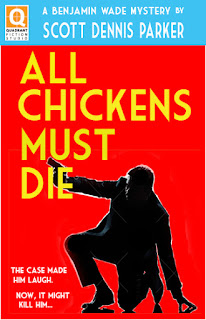 Let me know what you think. Do you like it? Do you not like it? What could make it be better? I've never done this before, so I'm happy to get some feedback.

Finally! FINALLY! Chicago has been nominated to be inducted in the Rock and Roll Hall of Fame.

Full roster here. And you can vote. Multiple times.