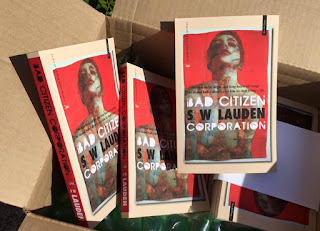 The last time I checked in at Do Some Damage, I was on a flight from New York to LA. This time I’m flying back from Bouchercon in Raleigh.

It was great weekend filled with new friends and old, lots of laughs, killer books, informative and entertaining panels, terrible ideas for collaborations and anthologies, and a death-defying car ride in the rain in search of “an authentic Carolina barbecue experience.”

This year’s conference was special for me because it was the first place that I held a copy of my debut novel, BAD CITIZEN CORPORATION. It officially comes out Nov. 3 from Rare Bird Books, but the publisher shipped a handful to me for show and tell at the conference.

The response from the incredibly supportive crime and mystery community was overwhelming. I felt like I was walking on air until a nagging question began eating at me: “How the hell are people outside of this conference going to find out about this book?”

So I adjourned to the bar. This was a writer’s conference, after all, and everybody knows that the Bouchercon hive makes the sweetest honey in the hotel lobby late at night. I got a lot of great feedback, but the responses were all over the map.

The common thread was that many authors are uneasy with marketing. It can be difficult to know how to strike the delicate balance between seeming desperate or aggressive, and effectively spreading the word about your latest masterpiece.

It got me thinking about the last time I was in Raleigh, fifteen years ago. Back when my rock band was the opening act on one club tour or another. Our whole world in those days was organized around playing 45 minutes a night to support our album.

Along the way, our little rock and roll circus might also do a few interviews or record store appearances. After every show we would hang around the t-shirt booth to sign CDs and connect with people who liked what we did. Then we’d pack up and head off to the next town to do it again. It’s a tried-and-true promotional strategy perfected over decades.

While more ambitious and established writers have used similar approaches, many simply don’t have the marketing budget, vacation time or emotional capacity to take the show on the road. Skinny jeans and pyrotechnics aside, I still think there’s a lesson to be learned from struggling rock bands: Stop acting embarrassed about marketing your work.

Why spend several years writing, editing, refining, re-writing, pitching, querying, negotiation, re-re-writing, re-editing and publishing our work only to act grumpy or aloof when it comes time to tell the world about it? I’m guessing the answer lies somewhere on the Bukowski-to-MFA spectrum, depending on the author.

There are many reasons why we might scuttle our own potential for success, including self-importance, self-doubt, self-loathing and self-sabotage—to name a few. And I can definitely relate given my daily urge to crawl back in bed, suck my thumb and remind myself, “They’re gonna see right through you, jackass!”

It seems like the point of publishing is to get people to read your writing, for better or for worse. Book trailers, SEO and magazine ads are all great, but that’s a piece of the puzzle that can come with budgetary limitations. Which brings us to a slightly modified version of the original question: How do readers find out about new books outside of paid advertising?

Thankfully, listening to established crime authors like Jack Getze or Les Edgerton talk about it—or watching Johnny Shaw, Christa Faust or Joe Clifford read their own work—is a great reminder that writing is a form of entertainment.

Most authors I’ve met will happily do readings, book signings or panels when opportunities arise, or we might even set up a few of our own at the local library, bookstore or bar. But what about all that time in between when we aren’t already concentrating on our next masterpiece?

The go-to platforms are blogs (our own and guest posts—thanks, Holly!), podcast and radio interviews, reviews, social media and video. From what I can tell, the trick is to create a consistent stream of original and engaging content that authentically reflects both our writing and personality, while resisting the urge to Tweet “Buy my book #amwriting” over and over and over again. Easier said than done.
I know there’s no magic bullet, but I would love to hear what you do to get the word out about your writing in the comments below. Or what you’ve seen other authors do with some degree of success.

swell to meet you
looking forward to the book

Great post, Steve. I'm one of those authors who hates and grumbles and whines about selling my books. So this resonated with me.

Thanks, Holly! And thanks for inviting me back. Love this community of writers.

I don't want to say that I've given up on selling books, exactly, but I have given it over to the fates. I probably made a huge amount of mistakes that helped to sink my novels so far so now I'm at the point where I will accept invitations to readings or whatever but I no longer actively do any marketing.

Seems like a fair decision to make, John, based on your personal experience. But even this comment is going to make me want to go seek out your books--I've heard great things. Don't be surprised if you get an interview request from me. Thanks for reading my post!

Great post, and good luck with your debut! Seems like every new idea that comes up (Kindle giveaways, for example) gets overwhelmed by writers and loses its uniqueness and selling power.

I haven't sold a ton of books, but the things that have worked best are what you mentioned - being active in a supportive community, and attending events. I stayed away from writing organizations for a while, but I've since found that ITW, MWA and SinC are terrifically helpful. And events like book festivals and fairs (particularly if you can become a featured writer, versus just hocking books at a long line of tables with other writers) are a great way to meet readers outside of our own tribe.

Thanks! My SinC and MWA memberships have been really helpful too. Supportive communities are where it's at, for sure.