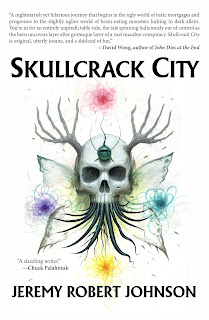 This just seemed like something that needed to be done.

Here are some small presses that I like and some recommended books for each one.

"We’ve published everything from minimalist dark comedies to meta-fictional SF, along with historical fiction, fairy tales for adults, and hybrid plays. We seek out books that are emotionally hard-hitting, critically engaging, and exhibit crisp, original prose. These books tend to be difficult to pigeonhole under any one banner, but together they form a complex mosaic of the disenfranchised, the poor, and others who are struggling to survive — and make an impact — in an increasingly bleak world. However, we’re not all about doom and gloom. We like to laugh, demand the absurd, and love great storytelling above all else."

"Starting out as a weird crime fiction press, BRB has branched out into horror, bizarro, and even nonfiction books. While the overall genre of our titles might be hard to pin down, all of our releases are connected by their incredible prose, killer design, and anarchic spirit. BRB has maintained a blistering publishing schedule, releasing 27 books (including 5 on its new imprints, King Shot Press and Ladybox Books) in a little over a year.

With a diverse and unpredictable catalog ranging from the southern gothic Peckerwood to the weirdo epic The Last Projector to the bizarro riff on B-movie madness Leprechaun in the Hood: The Musical: A Novel, BRB and its imprints are dedicated to bringing you fiction that falls just left-of-center. This is fiction for the rest of us."


Books I dog from them: Peckerwood by Jedidiah Ayres, Street Raised by Pearce Hansen, The Last Projector by David James Keaton, Gravesend by William Boyle, The Fix by Steve Lowe, Repo Shark by Cody Goodfellow


Books I dig from them: Rumrunners by Eric Beetner, Burn Cards by Chris Irvin, Out of Mercy by Jonathan Ashley, One-Eyed Jacks by Brad Smith, Neon Noir by Woody Haut, The Red Right Hand by Joel Townsley Rogers

"Word Horde was founded on the the idea that great stories should be given every opportunity to find the right audience. That when you work with the most talented creators available, you cannot help but create great art."


Books I dig from them: Vermillion by Molly Tanzer

"ChiZine Publications is willing to take risks. We’re looking for the unusual, the interesting, the thought-provoking. We look for writers who are also willing to take risks, who want to take dark genre fiction to a new place, who want to show readers something they haven’t seen before. CZP wants to startle, to astound, to share the bliss of good writing with our readership. We want stories using speculative elements—magic, technology, insanity, gods, or insane-magic-technology-gods all in one—to show the dark side of human nature. The good guy can feel—and act on—anger, hatred, vengeance just like the villain. Heroes don't always win, conclusions don’t always wrap things up nicely, and sometimes things can take a turn that’s just plain weird . . . even for the genre.


Books I dig from them: Bulletime by Nick Mamatas, The Door to Lost Pages by Claude Lalumiere, Every Shallow Cut by Tom Piccirilli, Haxan by Mark Hoover, In the Mean Time by Paul Tremblay, Katja From the Punk Band by Simon Logan, Napier's Bones by Derryl Murphy, People Live in Cashtown Corners by Tony Burgess, Sarah Court by Craig Davidson, Westlake Soul by Rio Youers.

Two Dollar Radio functions on a no-wasted bullets policy. You won’t find jokebooks or bathroom readers camouflaged in our lists. In the work we produce, we value ambition above all, and believe that none of our books/films crimp to convention when it comes to storytelling or voice. Ideally, that contributes to a liberating reading/viewing experience. Our primary interest lies with what we would characterize as bold work: subversive, original, and highly creative.


Books I dig from them: Ancient Oceans of Central Kentucky by David Connerley Nahm, Haints Stay by Colin Winnette, The Absolution of Roberto Acestes Laing by Nicholas Rombes, The Drop Edge of Yonder by Rudolph Wurlitzer, The Drummer by Anthony Neil Smith, The Orange Eats Creeps by Grace Krilanovich.

"One Eye Press is a multi-genre publisher with a focus on short consumable fiction ranging from flash fiction to short novels distributed across multiple formats."


Books I dig from them: Federales by Christopher Irvin, Gospel of the Bullet by Chris Leek

Books I dig from them: Saint Homicide by Jake Hinkson, Fierce Bitches by Jedidiah Ayres

"A continuously expanding selection of innovative literature and poetry. The kind of stuff that stays with you."


Books I dig from them: Noir: A Love Story by Edward Rathke, Winterswim by Ryan Bradley

"Fascinating characters… gripping stories… deadly writing. That’s what Blasted Heath is all about. The very best in crime fiction, with a few surprises along the way."


Books I dig from them: Angels of the North by Ray Banks, All the Young Warriors by Anthony Neil Smith, The Point by Gerard Brennan, Hot Wire by Gary Carson, Saturday's Child by Ray Banks, Hard Bite by Anonymous-9

"Bringing you the most original voices in crime fiction, neo-noir and neo pulp."


Books I dig from them: Bad Juju Jonathan Woods, A Choice of Nightmares by Lynn Kostoff, The Science of Paul by Aaron Philip Clark, The Bastard Hand by Heath Lowrance, In Nine Kinds of Pain by Leonard Fritz, Frank Sinatra in a Blender by Matthew McBride, The Fever Kill by Tom Piccirilli, The Last of the Smoking Bartenders by CJ Howell, Dust Devils by Roger Smith.

Beat to a Pulp

"Offering stories in a variety of genres (from noir and hardboiled crime to Westerns, from science fiction to the undefinable), BEAT to a PULP is sure to have something for every pulp enthusiast. "

“To provide readers with high quality speculative fiction novels, novellas, and anthologies while going above and beyond to promote and nurture our greatest resources, the author and their work.”


Books I dig from them: Selena by Greg Barth

"We tend to publish dark speculative fiction but have been known to branch out into other genres, if the story is right."


Books I dig from them: Sirens by Kurt Reichenbaugh,
Posted by Brian Lindenmuth at 4:00 AM

Small pubs are doing it right.
LFPress is always ahead, and Two Dollar Radio.
What about Snubnose Press?