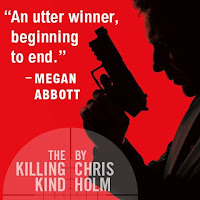 I plan to spend my day watching it climb up the sales charts.

You can read what the HuffPo said about it.


With THE KILLING KIND, Chris Holm has created a story of rare, compelling brilliance with a concept so high you'll need oxygen to finish it. Hitman against hitman, one pure silk and evil, the other not exactly good, but we root for him anyway as the classic antihero. This is a one-sitting extravagant, mind-blowing reading pleasure with a stable of characters who come across as all flesh, bone and folly. You will never look at men hired to kill other humans the same way. You won't merely read this book, you will inhale it. - David Baldacci, New York Times bestselling author

Next week I'll post the interview I did with Chris Holm about the new book. Here's a teaser:

SW: You spend a year or two writing a book. Then another year selling it. Maybe editing. Publishing and marketing and all that. How long has it been from the time you first started working on the story to publication day?

CH: This one took a while. It began, as you well know, with two guys kicking around an idea for a short story in the spring of 2010. One of them, the sensible one—me—was all, “I dunno. It sounds kinda big and messy. It could get away from me.” The other, who was probably just bored and stuff and wanted to egg me on, was like “Nah, do it. It’ll be cool. I’ll totes publish it.”

So I wrote it. At 11,000 words, it did kinda get away from me. But true to his word, that other dude—you—published it, in the second issue of Needle. Thanks, by the way.

People seemed to dig it. It got nominated for an Anthony. Wound up in THE BEST AMERICAN MYSTERY STORIES. My agent at the time told me I should consider adapting it into a novel, which was weird, because usually she didn’t tell me anything at all. But I resisted, because the story seemed complete to me. Then one day, I woke up and realized if I shifted the narrative from first to third, I could pull back the camera to show more of this character’s world, and tell the stories of the people hunting him.

In early 2013, we parted ways. I polished up the book again and started querying. It took almost a year to find the right agent. Another several months working with him on the book. And then it sold in something like a week. But even with that stroke of luck, we’re talking more than five years, start to finish.