For those of us with a traditional day job, our resumes are our introduction. They are the one-page summary of all that a potential employer would need to know about us. We list all the jobs we’ve had, the duties performed, and skills we’ve learned along the way.

When I updated my resume last year to apply for the job I now hold, I debated something: do I include my published fiction or not? On the “No” side, I thought published fiction might be a detriment to a technical writing career. On the “Yes” side, it showed what I hoped was a well-rounded proficiency in writing and thinking. I opted to include the then-only published short stories. Ironically, the first question in the interview was about my fiction. It was a nice, but unexpected, icebreaker.

Basically, including my fiction expanded my resume and my portfolio. Now, when I update my resume at some point (hopefully far away) in the future, I will definitely include my published novels. But how might this paradigm apply to the fiction writing career?

As of this week, I have provided the answer. I have published two novels this year with a third on the way. But we writers don’t live by novels alone. At least I don’t. So, as of this week, I have expanded the offerings from Quadrant Fiction Studio to include the Triple Action Western series of short stories and novellas. My vision for this line (probably imprint is the proper term) is to provide an outlet to write some western yarns in between writing longer novels. I found the quick-turn aspect of short story writing is a great cleanser while planning a longer work. The westerns I wrote in July were completed while I planned the current novel I’m finishing soon.

Triple Action Western is also an opportunity to let potential readers have a new way to discover the tales of Quadrant Fiction Studio. There is likely a reader who hates World War II-era stories (what I’ve published so far) but loves tales from the old west. It’s my goal to meet that reader with a few things he or she might like. At the same time, there’s a possibility that folks who love the Benjamin Wade stories but not enjoy westerns. That’s cool. I’m working on writing stories for more than one type of reader.

It’s early days here at the home office of Quadrant Fiction Studio, but they’re exciting days. And it’s with great pleasure I can introduce the first Triple Action Western: “The Box Maker.” 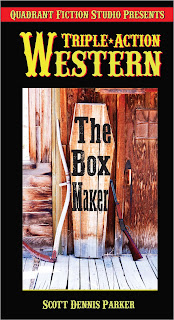 Emory Duvall practices his simple carpentry trade, knows everyone in town, and stays out of trouble. But when a young gunslinger pulls iron on him and makes an unusual request, trouble lands in Duvall’s lap. Now, the carpenter must figure out how to avoid getting shot…and how many coffins he will have to make.

Available exclusively at Amazon: http://tinyurl.com/nct6sey
Posted by Scott D. Parker at 1:00 AM