Today I'm broadcasting from Rogue River, Oregon. As I write this post, I'm watching The Price is Right with my Grandma, which is only one of the many television shows I watch when I'm visiting her. Later today, we'll see The Young and the Restless, General Hospital and The Bold and the Beautiful. Maybe not the most exciting vacation ever, but it takes me back to my childhood when my brother and I would spend a couple of weeks with my grandparents every summer. They lived in Coalinga, California, which, if you haven't been there, is the sort of place that feels like you can never escape, even if you drive for miles and miles. Kind of like a real-life Wayward Pines, only not as charming.

Mostly, I loved those vacations in Coalinga. At home we had chores to do but at Grandma's we got to sleep in and eat sugar cereal for breakfast. My Grandma gave me home permanents and took us to the pool at the community college where they had a high diving board. I'm not sure I could jump off one now but as a kid I had no problem with it. Same with doing cartwheels and twirling on the uneven bars at the playground. 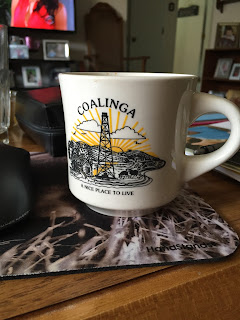 Summers in Coalinga were hot, which made playing outside during the day unpleasant. My brother and I would play in the living room all day with my Grandma's "soapies" playing in the background. One day in August the program was interrupted for a special news alert and the newscaster announced that Elvis Presley was dead. I turned to my Grandma and said, "the Elvis Presley?" It didn't seem possible.

My Grandpa worked six days a week. We'd get up early and have a Carnation Instant Breakfast with him while he played solitaire before work. He was a tractor mechanic on a farm and when he came home he smelled like motor oil and cigarettes. Sometime before I was born, he lost his left index finger down to the second knuckle in a work accident. I never thought I'd forget his hands and yet I just had to ask my Grandma which one--right or left--was missing the finger. She was married to him for nearly 69 years and had to think about it herself.

I got my taste for black coffee and beer during those summers. My Grandma had a pot of weak Folgers in the coffee maker ready throughout the day and my Grandpa would give me sips of the Coors he opened when he got home from work.

Every summer, we made a neighborhood friend or two. There was an older girl down the street who loved telling us how worldly she was. She told me about children being kidnapped and sold on the "black market" and I spent the remainder of the summer terrified that I'd be snatched.

But you know what? They really were good times--some of the best of my life. And that's why I'll happily sit here watching soapies with my Grandma and hope I get to do it for many years to come.
Posted by Holly West at 2:46 PM