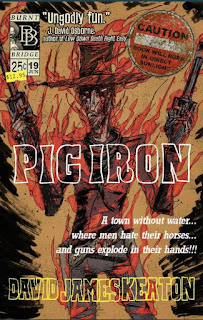 My new novel Pig Iron had a strange journey to print, and it’s hard to know where to start, but I feel like a reason to have detailed the adventure may present itself by the time I’m finished. I guess it pretty much started when my dad played me the Marty Robbins song “Big Iron,” and we kept having conversations about the story within that song, both of us amazed and how much character development singer/songwriter Robbins got out of so few lines. We felt like we knew “Red” and “The Ranger” pretty well after a few years of repeat listening, and this led to more discussions about what might be going on behind those lyrics. Our interpretation got weirder and weirder, and I became obsessed with the talk of people on that second-to-last lyric of not seeing the Ranger “clear leather,” and how maybe that meant he didn’t shoot Red at all? So we indulged ourselves, and whenever we had some time between family gatherings, my dad and I cranked out a screenplay. At the time, I was trying to be an unsold screenwriter rather than an unread author, so I sent out Pig Iron (The Movie) to a couple agents and producers and got all sorts of fun rejections. My favorite would have to be the guy who emailed and asked, “Have you ever written a screenplay before?” I responded, “Nope,” thinking he must be real impressed. Instead he sends back, “We thought so. We started printing this out at noon, and it’s still going.” It was well after noon, of course. I wanted to at least congratulate him on choosing to print a western script at “High Noon” of all times, but instead I just moonwalked out of that online conversation and worked on cutting the giant script down to a more manageable size. That was Ryan Reynold’s agent by the way, but back then no one was as impressed by that.

So with enough wasted years and close calls, I moved on to trying books, but I always liked the set pieces in Pig Iron, maybe not all those big speeches though, so at some point, I tried to convert it into a novel, which seemed like the most backwards move yet, making it irresistible. But it never felt like a book to, and instead I cannibalized it for parts, turning some of the showdowns into short stories instead, just so I could show my dad I’d turned it into something tangible. “Three Ways Without Water (or the Day Drunk Driving, Roadkill, and the Electric Chair Were Invented,” a short story that was sort of a condensed version of the entire script, was the first story to come out of the script, published in Pulp Modern between Alec Cizak meltdowns, and “Smelt (or a Gun Named Sioux,” which was sort of a sequel, found a home in The Big Adios. “Ha’Penny Dreadfuller,” sort of a prequel or origin story, cobbled together from backstory conversations in the screenplay, ended up at Barrow Press Review. And those three stories felt like the logical conclusion to my attempt at a western. Then I went down to St. Louis for a Noir at the Bar with Jed Ayres, and afterwards while drinking, Jed, Scott Phillips, and myself watched as the late, great Cort McMeel began to tell us of his dozen or so Big Ideas, all amazing brainstorms which he sold to us like a pro. I was ready to follow him into the breach, no joke. Anywhere. He was drunk, but passionate. And one of Cort’s brainstorms was for an anthology of novellas called “Acid Westerns,” a term I hadn’t heard before that night, or if I did, I was talking about the wrong thing, but I’ve since realized this genre encompasses nearly all of my favorite western films. It’s the name of all those weird ‘70s westerns with the counterculture Mad Max vibe to them. And I thought, “Goddamn, that’s kind of what Pig Iron is! Was! Whatever!”  Then Cort got really wound up as I went through a list of a dozen Irish films to see whether he thought they were “legit.” This led to another Big Idea, but that’s another story for another time.

So I went to work on Pig Iron again, starting from those three short stories this time though, rather than the cinderblock of a screenplay. Concentrating on the main idea of a town without water, and how long something like that might last, and how a man could win a gunfight without actually pulling a gun, of course. And out popped a lean, mean, very simple, sorta “cinematic” novel. It was so tiny I felt guilty, so inspired by Deadwood and A Clockwork Orange, I threw in a glossary of all the western terms I’d invented along the way, so that people might be surprised when they turned to the definitions in the back of the book that otherwise noble cowboys had been referring to drunkenness and masturbation during even their most innocent conversations, which I still like to believe is happening in most western films, acid or not.

So Pig Iron finally exists in some form, so far away from the days of that screenplay and the song “Big Iron” that it’s a new thing entirely really. In fact, I wrote my own song to include in the credits, still feeling guilty about it’s girth, sort of a “Nick Cave meets Johnny Cash” kinda thing, but with more people catching on fire in the chorus. I do wish Cort McMeel would have been alive to read it, or sing it. And I also think he would have enjoyed Scott Phillips’ own western novel, supposedly inspired from that time in the bar, Hop Alley, an amazing book you should certainly read first chance you get, if you want to find out how dangerous ghost-busting scams in the 1800s could get. So if you get a chance to give it a look, Pig Iron the movie turned novel will be coming out from Burnt Bridge/Blastgun Books, and will drop on Amazon or wherever on June 19th, my dad’s birthday, and you can see what might happen to a town without water and guns that don’t work right. Here’s a hint. Everything burns.