How Not To Write: Part Two: Dialogue

In Part One I took a swing at Three-Act Structure. Not to say nobody should use it, but rather, to say that it's not the only option. Go with as many -or as few- Acts as your character needs. I think that's important advice. Actually important. Like, run for your lives, guys, I've said something that I think works, and it wasn't a fart joke.

This week isn't so solid. I'm talking more about personal opinion here, not giving out advice. These are my views, and this is how I do it, but I'm not recommending anybody else should or would need to do the same.

Because this week, I'm talking about dialogue.

One of the few bits of writing advice I ever give with a straight face is 'whatever works.' Get your head down, get on with it, and go with whatever it takes to get you to the end of the draft. That could go double for dialogue. Every writer has their own views on how people should talk, how the sentences should be structured, whether grammar should be correct, whether to let people talk in vernacular....the list goes on.

Let's take a look at TV and film. It's often an easier reference point, because you can dip into a scene on a DVD, or remember a great quote, and they're easier to call to mind that a chapter in a novel. Writers like Joss Whedon and Aaron Sorkin get a lot of acclaim (which brings with it a lot of criticism, too.) I can't sit here and tell you they suck. Whedon's made two of the biggest films of all fuckin' time. I've been a big fan of much of his work, and will no doubt very much enjoy his future film or television projects. I've also been a fan of Sorkin -though that's a bit more of a historical thing, now. His stageplays are great, Sports Night was an unrecognised masterpiece, I enjoy the first two seasons of West Wing and, hell, I'm one of the few who has a torch burning for Studio 60. If you bring  The Newsroom anywhere near me, I'll have an allergic reaction.

I re-watched all of West Wing on a binge recently, and the dialogue formula becomes clear. And when you're watching a Joss Whedon film or television show, you're always aware of who has written it. And, far beyond structure (since both writers do a lot of structural work, but are also willing to break the rules and mess around) the stamp that identifies them in dialogue. As I sat watching Avengers: Age Of Ultron, and all of the characters took it in turns to crack one liners, I wasn't thinking, man, these characters are so funny, I was thinking, Joss sure does like his jokes. And I'm fairly confident that many of us could sit and write a script based around the West Wing characters and ape the dialogue style. We could make an even stronger charge against Tarantino where, to my view, the only film in which all the characters aren't simply talking with Tarantino's voice is Jackie Brown, where he got to piggy back on Elmore Leonard dialogue.

Clearly, this works for a hell of a lot of people. A lot of viewers -and in novels a lot of readers- are drawn to that authorial voice. They like the familiar tics. They slip the recognised patterns of dialogue on, like comfortable clothes, and sink into the world.

But I realised a few books ago that's not what I want for my work. I'm constantly striving to get my characters to sound like real people talking, and to do that -to my mind- I can't have one recognised voice, because people talk differently. Some talk in long run-on sentences, some talk in fragments, some talk in clear, straight lines. Some characters will talk for hours without ever saying the one thing that's on their mind, some will simply come right out and get to the point.

That created some interesting challenges while I was writing the Miller books, because it was all first-person narration. I couldn't go too far into giving everyone a separate way of talking, because the story was being relayed to us through one character, and his own voice would have edited all the other characters. But in Ways To Die In Glasgow (coughcomingsooncough) I got to play with different voices, and...well that's a blog for another time. 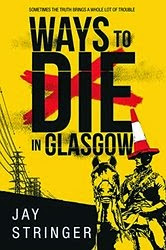 I've been finding it more difficult to write books set in the midlands lately, and I've realised it's the voice. I haven't lived there for almost 9 years now, and so when I write the dialogue it's more and more of me, and less and less of the midlands. Whereas, if I try and write a story set in Glasgow, the voices flow more easily. I talk to these guys. I live with them. Drink with them. Argue with them.

So, that's all personal opinion. Do I have anything practical to say today? Sure, but people are probably going to disagree with me, so the usual pinch-of-salt should be taken;

And that's true, but it comes with a danger. The more you read the dialogue out loud, the result is the words start to sound like something you would say. In working to ensure that the words can flow from a mouth, and fly off a tongue, you really ensure that it flows from your mouth, and can fly off your tongue. And the danger there is that all of the voices become yours.

I do it for some characters, but not all. Sometimes I'll cast an actor in a certain supporting role, and have their voice in my head, and test the dialogue out with them that way. On a few rare occasions, I've asked someone else to read some of the dialogue out, and seen if it flies off their tongue.

Reading dialogue out loud is a good and important trick, but -as with just about everything else in our writing toolbox- be aware of it's limitations, and keep your ear trained for your own voice as well as the characters, so that you can spot the difference.
Posted by Jay Stringer at 7:13 AM

I used to do anentire draft just for dialog. I'd work on one character at a time, skipping through the book to find where they speak next, so that, once I got the voice in my head, no one else muddled it up. I'm not that strict anymore--I've learned a few things so the process isn't that tedious--but I still do it from time to time when stuck.

I also read dialog aloud, but make a conscious effort to use a different voice for each character. Not to the extent an actor would in an audio book, but enough so keep straight in my mind "This is what this one sounds like."

Good tip regarding focusing on each character's dialogue in turn. I do that with scripts.