How Not To Write: Part One: Structure.

I don't give out writing advice often, and when I do, I like it to be wrong. So for my next few blogs here on DSD, I'm going to be giving some tips. Run for your lives.

First of all, I'm going to let you laugh at me. Here's a thing that I actually said, straight-faced, to a friend at the London Book Fair;

But here's the thing-

There is one piece of writing advice that has become so fundamentally accepted, so adopted as 'the way it is,' that it's even accepted as fact by people who don't write.

A story has to have Three Acts. A beginning, middle and end.

And you can see it in the writing. Many books stick to this, many screenwriters drive themselves into the ground trying to fit their story to that simple idea. The end result? A lot of books that feel similar, and a lot of unsold screenplays.

I spent a long time trying it.

The dirty secret -which I've shared on here before- is that my first novel only really had two acts. At the time, I felt that was wrong. I thought I'd failed as a writer. I spent some time in the re-edits trying to fake it; I moved a few things around to give the impression of a third act. 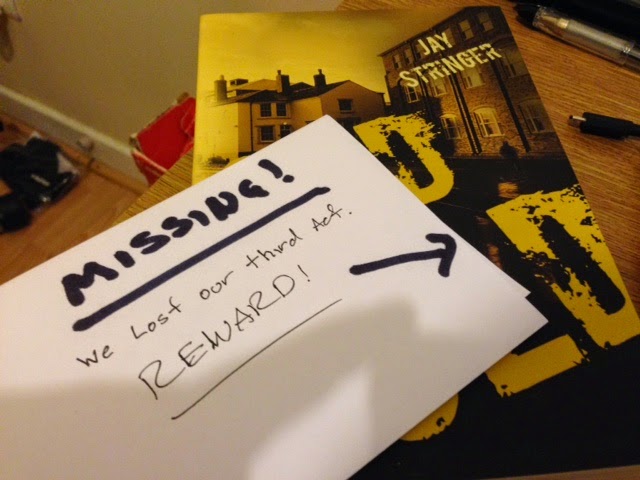 My second book, Runaway Town, was written with the intent of doing it right this time and I tried hard to stick to Three-Act structure (but, shhhhhh, don't tell anyone, it has four.) My third book, Lost City, has four.

I went through a phase when I would say "well, I write in three Acts, but my second act is broken into two distinct chunks." Which is, really, the cowardly way of saying, "this book has four Acts." When I was writing Ways To Die In Glasgow (due out in August, and available here in the UK and here for the US, pre-order is your friend) I found that my storytelling had evolved to fit neatly into a Five-Act structure.

(And I don't mean neat as in tidy, a tame, boring story.  Nope. There's sex, drugs, jokes, blood, death, maybe a little swearing....seriously....PRE-ORDER IS YOUR FRIEND.)

The book I wrote last year was called CRIMINALS. It, too, had five Acts. Though I was still pretending it had three. I would say to people at that point, "yeah, I write in three acts, but I write the second Act in three chunks." I know, right?

Here's the thing. Not every story is the same. But if you only have one Act-Structure in mind, you're going to end up driving each story down the same road. The turns are going to become familiar, we'll learn how to pace ourselves to hit each traffic light at the right time.

Ultimately, through our stories we're revealing character. Each Act-Break marks a step in both the external and internal world of our characters. Something life changing has happened, or they've reached a moment when external forces are acting against them, or they've changed their mind, or changed their emotional reaction to something.

There's been a change.

And if we insist on only having one structure, then we insist on all characters having the same amount of changes. Which is bull, because everybody's lives are different. Some lives are One-Act, some are two, some are probably seventy six (I'm guessing that can be the only way Alan Moore's upcoming novel is so long.)

This, I believe, is one of the reasons so many writers struggle when they're in the middle third of their book. Because they think of it as the middle third. They've set up and opening Act, and they're working towards their final Act, but then events in the middle slow down, or gather together, or become a mess of treacle and failure. "Well, somewhere here I need to have a mid-point...but is it the scene I'm on now, or do I need another one? And, help, I've lost my sub-plot."

If, instead, that writer was thinking, "hey I'm in Act three of five, I'll have an Act-Break to hit soon, then another, then the final stretch..." things might be easier to manage, and the character arc might be more defined as a result.

This isn't to say a story can't be three Acts. Some need to be. Some don't need to be. The important take-away from my shitty bit of writing advice, is simply to free yourself from the idea that a story has to be three acts. Looking back now, I know it's okay that my first book only had two Acts, because it was only a Two-Act story. The character wasn't ready for the extra development and learning he would have taken in a 'correct' third act. It would have felt fake.

And this also isn't to say all books need to be done to my current structure (and I do have a Five-Act guide that I'm experimenting with, but I'm not ready to share it.) Hell, not even all of my books are going to be five from now on. Some will be three. some will be four. It depends on the characters and the story.

The reason I'm writing this is that I think Three-Act Structure has become a straight-jacket. It's something we're all told, and it can be damaging. It can hold back aspiring writers, and it can make career-novelists start to crank out work that is repetitive. You are in charge of telling the story. You get to make the big decisions, and your character gets to go on a journey, and there isn't only one way of getting there. Does your story really need to be told in three acts? Cool, have at it. But maybe it doesn't, and it's that 'maybe it doesn't' that I hope people take from this.

That, and the fact I'm a dick.

If you're struggling on your current WIP, and you've always been writing with three acts as the rule, take a step back. Have another look. You might be surprised.

Next time, I'll be talking about dialogue.

Great post, Jay. I'd only add this, if you've been struggling with your WIP and HAVE NEVER CONSIDERED using three-act (or four-act or five-act) structure, now might be the time to take a look at it!

Or, you know, you can get to the end of your story and then go back and decide where the act breaks go - you're really the only one who needs to know.

And your screenplays may have been fantastic, the quality of a screenplay has nothing to do with whether or not it sells. There's just an incredibly small market for original screenplays.

Okay, so you're a dick. You're also right about this writing thing. Stories go how they go. Good stories naturally tend to break out along three acts, but that comes after. Among the reasons I don't read a lot of bestsellers (or watch episodic TV) is because the act breaks are so obvious, like writing by the numbers.

I read a blog that stated that when the Main Character made a decision that he couldn't go back on, that was an act break. As you pointed out, that means you can have many acts in a story. Whatever fits.