I met with the editor I am using for my books yesterday. The editor and I, we’ve not known each other that long. I consider that a good thing especially when delivering a manuscript. With little to go on regarding me, the only thing she has is what I’ve written.

The project I hired her to edit is the longest to date that she’s read and reviewed. I curious to see if me telling a longer story than WADING INTO WAR well was in the cards.

Yesterday, as we sat down at a nice little coffee and sandwich shop in the Houston Heights, one of the first things she told was that the manuscript was a thoroughly enjoyable read. Sure, she bled all over it. That’s what I need her to do. But her words served as yet another bit of encouragement for this writing excursion I've chosen for myself.

You see, two weeks ago, when last I had an off Friday (I get every other Friday off), she was already done with the manuscript. I had plans that day and suggested that we maintain our 8 May meeting. The reasoning, she said, for wondering if I’d want to meet early was to get a jump on the edits. But it was the unspoken subtext that snagged me. Why would I want to get a jump on the edits…unless they were so bad that parts of the story needed to be rewritten. Heavens!

But, I fretted not. The beauty of being an independent author and publisher is that, while I have a general idea of when I’d like to publish these books, I don’t necessarily have to stick to it, especially since I’ve not announced the date yet. So, I waited until yesterday to meet. I busted out 2,700 words on the new project, met with her, got the manuscript with her red markups and fifty pages (!) of notes, and was happy as a clam.

Which brings me to another thing that brings me joy: the cover of my second book, THE PHANTOM AUTOMOBILES. (I can’t tell you how many times me, as a Star Wars fan, keeps wanting to type “Menace” instead of “Automobiles”.) Of all the books I’ve written—8 to date—PHANTOM was the only one whose title I thought of during the writing process. I suck at titles. The work I just completed had no title until after I "The End," and even then, it was someone else who suggested a much better moniker. In fact, my wife was the one who suggested “The Mark of the Imposter” for a Calvin Carter yarn I wrote for “Livin’ on Jacks and Queens.”

Anyway, as easy as the title came, so, too, did the cover image. I had one idea that I quickly dropped to be filled by the image below. Whereas my graphic artist, Ike, and I went back and forth with WADING INTO WAR, this was almost a one-and-done affair.

I purchased the Adobe Creative Cloud suite of software so I had Illustrator and InDesign at my disposal. I knew next to nothing about either program, but I learned enough to be able to crop images from other sources, put’em in a single file, and color like a two year old.

When it came to the title font, I wanted something different than Benjamin Wade’s art deco. What I had in my head was fonts from 1940s movie trailers. Do you know how long I scoured the internet looking for a font like this before a friend of mine said, “Oh, you want a brush font.” Sure enough, plug that word in with “1940s” and viola. Another differentiator is the subtitle. Gordon Gardner, the co-star in WADING is the featured player here. Since he’s a reporter, I didn’t want to use the term “A Gordon Gardner Mystery” so I opted for “Investigation” with a courier font.

Ike cleaned everything up and made it look presentable to the world. And here you go. 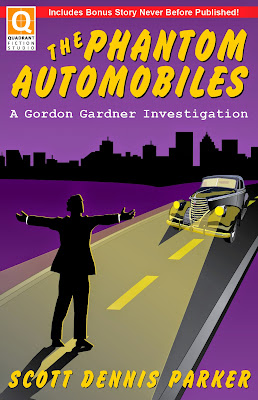 Look for THE PHANTOM AUTOMOBILES later this month.