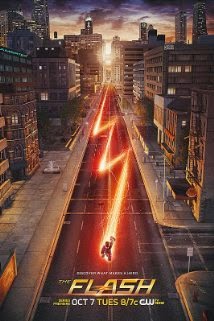 Some of you might wonder why I use the term “early impressions” on a TV show that debuted last fall and is fast approaching the end of it’s freshman season. Well, that’s because I’m behind on The Flash and I’m racing to catch up before the season ends.

I’ve caught up on GOTHAM. I’m five episodes into The Flash now and I can pretty much see how this is going to go, at least in these early episodes: Barry and his team at S.T.A.R. Labs—Caitlin the doctor who helps make sure Barry doesn’t die while running; Cisco the tech genius who makes all the gadgets and names the villains of the week, and Dr. Harrison Wells, the brilliant scientist whose particle accelerator caused all the havoc in Central City—learn what Barry’s abilities are and helps him channel them while stopping all the bad-guy meta-humans who are also discovering their powers.

The central idea is that the particle accelerator malfunctioned on the night of a big storm. A lightening bolt struck Barry and turned him into the Flash. What I liked very much early on in the first episode is that we see Barry in his day job—CSI Tech—doing amazing observational things. Basically he had a super-power before he had a super-power. But this also establishes this show with the police procedural framework, not to the extent of Gotham, but taking a page from the X-Files. So far, all the other meta-humans are bad guys, a conceit I do hope they change in season 2. Each time, the bad meta-human can do odd things like control the weather or multiply himself. The team have to figure out a way for Barry do defeat them.

And I do mean ‘the team.’ Yes, Barry’s the one in the suit but he can’t do this super-hero thing by himself. He needs his support group.

The casting of Grant Gustin as Barry Allen is great. He brings an ebullient exuberance to the part, the job of being a good person who discovers that he’s got super powers. None of the overly angst stuff, just like “Wow, look what I can do.” I am really enjoying watching him be Barry Allen.

In a cool bit of stunt casting, John Wesley Shipp—The original Flash from the 1990 TV show—plays Barry’s dad, who is falsely accused of killing his wife 14 years before the show starts. Like all good shows like CASTLE or X-FILES, there’s a central mythology—the mom’s murder in a glowing yellow lightening storm in which young Barry saw a man—that needs to be solved while they deal with the villain of the week. It’s tried and true and I don’t have a problem with it. The scenes between Barry and his imprisoned father are heart-tugging.

I also really enjoy the foster father, Joe West, played by Jesse Martin, knows that Barry is the Flash, or the Blue or the Red Streak. (He’s not the Flash in name yet). The only thing that West asks of Barry is to keep his powers a secret from his daughter, Iris West, on whom Barry has a crush. Naturally, she starts being a reporter and starts a blog devoted to The Blur and, well, we know where this is going.

There are a few basic network TV tropes in play here, but the real joy is in the fact this show is just plain fun. No dark tales a la Gotham or Arrow although I’ve only seen the pilot. The DC Easter eggs (Grodd!) are also fun to pick out.

All in all, I plan to catch up on Flash by the time the season wraps so I can watch in real time.

Anyone else watching The Flash?


On ELEMENTARY on Thursday, there was a moment, late in the episode, where Sherlock had to explain his reasons why he could not, “in good conscience,” provide a sperm sample to a lover who wanted to have a child. It is brilliant. It is among the best examples I’ve ever seen of what it’s like to be imprisoned by his powers of observation. Johnny Lee Miller delivers the lines in an achingly melancholy way. This will go down as one of the best moments of the entire series. It’s at the 39:00 minute mark in this video. It’s the whole episode.
Posted by Scott D. Parker at 1:00 AM

I really like THE FLASH, and it gets better as it goes on. I have a few quibbles--I think too many people know Barry's secret identity, and the whole "team" set-up seems too blatantly copied from ARROW--but overall they really get things right and there's a sense of pure fun that's very reminiscent of the comics from the Sixties.

I haven't watching ARROW (yet--my summer project) but I can't help but wonder if the "everyone knows who he is" thing is a post-modern reaction to the old version (i.e., Adv. of Superman) when no one knew the secret identity. T'was funny on episode 4 or 5 when they showed scenes from previous episodes, they showed Felicity Smoak. I was like, "Did I miss something?" then realized it must've been on ARROW. Now, I have to go back and catch those episodes, even if they are out of context.

I think you're right about the secret identity business.

ARROW is a lot darker than THE FLASH, but I like it quite a bit, too. They sneak in the occasional tribute to the writers and artists who have worked on the comics, too, which is always nice.