Porochista Khakpour on inspiration and The Last Illusion

Porochista Khakpour's book SONS AND OTHER FLAMMABLE OBJECTS was one of those rarities in our line of work -- a book worth all the hype.

Her newest one, THE LAST ILLUSION, recently came out in paperback.

"An audaciously ambitious novel that teeters along a tightrope but never falls off." (Kirkus, starred review)

From the critically acclaimed author of Sons and Other Flammable Objects comes a bold fabulist novel about a feral boy coming of age in New York, based on a legend from the medieval Persian epic theShahnameh, the Book of Kings. 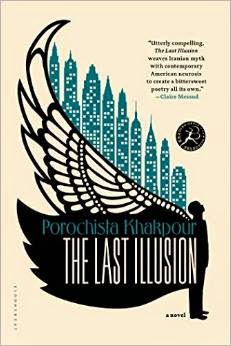 In an Iranian village, Zal's demented mother, horrified by the pallor of his skin and hair, is convinced she has given birth to a "white demon." She hides him in a birdcage for the next decade. Rescued by a behavioral analyst, Zal awakens in New York to the possibility of a future. A stunted and unfit adolescent, he strives to become human as he stumbles toward adulthood. As New York survives one potential disaster, Y2K, and begins hurtling toward another, 9/11, Zal finds himself in a cast of fellow outsiders. A friendship with a famous illusionist who claims-to the Bird Boy's delight- that he can fly and an affair with a disturbed artist who believes she is clairvoyant send Zal's life spiraling into chaos. Like the rest of New York, he is on a collision course with devastation.


In tones haunting yet humorous and unflinching yet reverential, The Last Illusion explores the powers of storytelling while investigating magical thinking. Its lyricism, inventiveness, and examination of otherness can appeal to readers of Salman Rushdie and Helen Oyeyemi. A celebrated chronicler of the 9/11-era, Khakpour reimagines New York's most harrowing catastrophe with a dazzling homage to her beloved city

Here she talks about the influences that brought her to that book -- or that book to her.

During this period, I also began teaching American experimental literature—which seemed influenced by the Latin American school—and it was through David Markson, Lydia Davis, Kathy Acker, David Foster Wallace, and many other innovators in fiction that I kept faith that the strangeness of the book would in the end only help it find its audience. >>

That sounds good. I'll have to look it up. Love discovering new authors.