Turns out, 83 of my 96 online friends have books eligible for some sort of award. That's great. Heck, I've read a large number of those books and liked quite a few. And there are more awards and nominations coming.

Barrys.
Edgars.
Hammetts.
Hugo.
Anthonys.
Neros.
The list goes on and on.

Seems as if everyone I know is nominated for an award named after one dead white man or another.

The presumption, of course, is that winning an award is useful to a writer's career. If you win the award, then you can add that to your bio. If you don't, you can hope again next year or swear the awards off as too political or a popularity contest, of course.

Having that award helps you stand out from folks who don't.

James Jimjam, Edgar-winning author of THE FUNAMBULIST'S DAUGHTER'S CONSPIRACY, will be reading tonight at the Booke Shoppe on Main Street.

Sometimes the problem with being a professional writer is less with the writing and more with the acting professionally.

A few years ago, I was somehow nominated for something and unsure how to, um, well, you know, get people to notice so they'd think I was cool? As Joel McHale would say, ANYWAY, someone suggested using the old "Congratulations to my fellow nominees" construction. Which is great. You draw attention to yourself, but it looks as if you're congratulating other people. Flawless.  Who could fault you for that? I didn't give it much more thought.

OK. Let me take a second before we go further to give some space to the usefulness of these awards. To me, the awards you don't have to explain are awesome. He won the Pulitzer. She won the Nobel. Then you have the other awards, the ones you have to explain. She won the William T. Nulon Award, given annually to outstanding work in the field of microbiotics. His novel was chosen for Oprah's Book Club. She spoke at the Roundhouse Colloquium, a group of philanthropists devoted to conserving soil in south Alabama.

Different awards carry different weight, I suppose, but each award is a way to separate yourself from other books (the losers) and a way for people who might not see your book to notice it.

You see, there are those lists that come out with the awards. Here are the six books that made the shortlist for the Man Booker Prize, they'll say. Some people may see a list like that and buy books based on it. Or they may track down a book simply because it won a prize. I don't, but some folks might.

Also, some awards come with money. You can have all the book cover stickers -- the circle ones with all the points -- that you want. Those are great. Hand me an award with a check.

Hang on. Before we get much further (GAWD, how much further is there?) I should say something about the folks who work their asses off getting these awards together, sorting and reading through everything. Thanks to them. They're the ones who have to run back and forth to the post office to pick up the books your publicists sent. They're the ones who have to collate a billion emails, who have to set up spreadsheets to keep vote tally straight. The people who run these awards work as hard getting this stuff done as we do writing the books. And there ain't an award given out to the people who do all the award work while we're sitting in our fancy clothes waiting on something glass to put on the shelf. So thanks tons to those folks.

So, let's say you want an award for your book and you need to get nominated or voted on. What are you to do?

Well, sending out an email to everyone in your list probably isn't the most subtle way to go. A couple of years ago, there was a bit of a discussion about someone who emailed out a "Vote For My Book Because It Is The Best" blast to everyone, including other people who were nominated in the same category. That didn't go over too well, but I understand the idea of wanting people to know that they can vote on the thing and that you're eligible. I mean, we want good thing for our friends.

Here's what I've found, though. You're in danger of preaching to the choir with your tweets and status updates. And, if you're stuck doing the "I hate to mention this and I hate self-promotion, but" thing, then you're probably not going to get too much traction. Look, everyone hates self-promotion. Many countries have banned it. But if you're going to do it, I have a suggestion which you can take or leave.

You can make an image. A song. A flier. Whatever. If you post a status update on your Facebook wall, your friends will see it. Maybe they already voted for you. Or maybe they're voting for themselves. (Many of my friends are assholes like that.) So, you probably want to reach your friend's mother or proctologist or high school pal. Make a thing that can get shared. Show your book. A blurb. Say it's been nominated and how to vote for it. If you care enough, make an advertisement for your book and get people to share it.

See, the thing is, you want to reach outside your circle -- and you never know what's going to catch on.

The other day, The Atlantic posted a thing on Facebook about cats, so I made a throw-away joke. I tweeted it, which maybe two people who follow me retweeted. I think I mentioned on my own Facebook wall, which a few people probably saw. And I made a comment on the original post on The Atlantic's Facebook page. 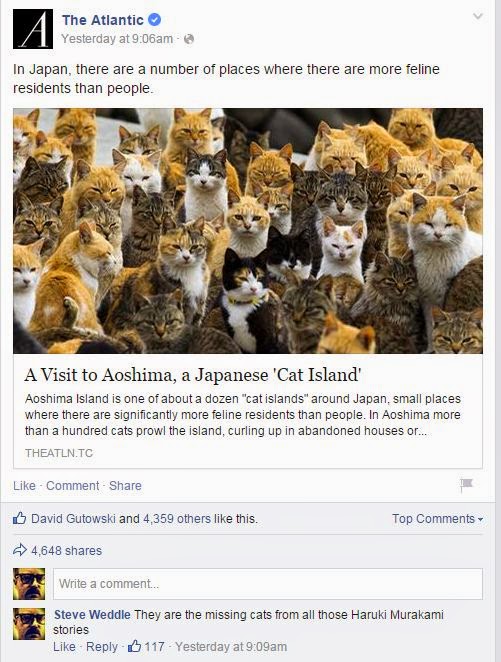 More than 100 people I don't know liked my comment and some replied. If I engaged with those replies, I guess there's the chance the response would grow even more. Now, 100 likes isn't the point here. I'm saying that, in my experience, reaching outside your circle for new people is generally your better bet when you're looking to increase coverage.

Another thing to do would be to promote our fellow authors instead of ourselves. I mean, you can do what you want. You don't need me to be your conscience (seriously, I'm a jerk and you don't want that), but I'd be much more likely to vote for James Jimjam if Becca Mason told me why his novel was great, wouldn't you? I say we make an effort to do that. Now, for me that's easier than for some of you. I'm not nominated for squat, so I don't lose any self-promotion time by promoting others. The time you spend helping others is -- and always will be -- up to you.

Anyway, here's to the best books winning the best awards.

Great post, Steve! For me, promoting others is more than just a way for me to get discovered outside my own circles. It connects me more to my fellow authors. By helping to spread word of their works to the people who follow me, it leads me to believe I'm giving something back to those who support my ongoing journey as an author. Plus, there's all those warm, squishy feelings that come with helping others out.

I am so lost....almost makes me dread the whole thing.

Jeff,
Agreed. Part of what's cool about living in this read/write world is being able to spread the love. Heck, many of my favorite reads have been hand-sold to me by pals.