'Sycophants and Vultures': Former Monroeville Resident Weighs in on the Harper Lee Controversy

A few days ago I saw a Facebook post from a high school friend, Kristi Weldon, about the Harper Lee novel imbroglio. Turned out she had lived in Monroeville for a few years and thus had more insight than most--some interesting details I had not seen elsewhere, as well as an opinion worth hearing.

Lein Shory: How did you end up living in Monroeville? How long were you there?

Kristi Weldon: I did a two-week internship at Vanity Fair Mills over Christmas of 1992. In spring of 1993, they called me about an opening in that department. I accepted the position and moved down when I graduated from Auburn in June 1993. I relocated to NYC in January 1996, as part of a company reorganization then came to Atlanta Metro North with the company in February 1997. (The company was bought by a competitor and no longer exists.) I lived in Monroeville for 2 1/2 years.

LS: How much contact did you have with Harper Lee's sister Miss Alice, who passed away a few months ago? 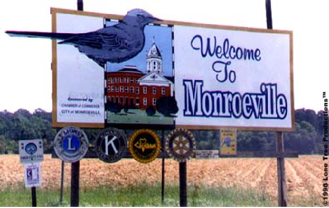 KW: We went to church together (Dr. Thomas Butts, cited in a Vulture article last year, was our minister at the time) and were both on the board. We saw each other every other Sunday (I commuted to Auburn every other weekend to see my fiancé) as well as at special events, board meetings, and once a month at supper club for a year.

LS: So what did you think when you read the news that Harper Lee had a new book coming out?

KW: I was appalled because I knew it wasn't her idea.

LS: Do you still have contacts/friends in Monroeville? What do you think is the general sentiment in town about what's going on?

KW: Yes, I still have friends there. I even have friends here who are Monroeville natives and have family there. They are the ones who are sharing these articles which I have every reason to believe to be true.
Citizens not only respected Nelle's (pronounced "Nellie") privacy but also went to lengths to protect her. For example, if you wanted to get a signed copy of TKAM, there was only one way to get it: she signed a relatively small number of hardbacks which could only be purchased through a local gift shop at Christmas. Once they were sold out, that was it until the next year. And nobody--I mean nobody--discussed her or the characters/events which inspired the book. My mom (it's her all time favorite book) went "fishing" when she came to visit me and was completely shut down.

LS: There have been several statements from Lee in the last few days, and her international rights agent has said he's visited with her and she's fully on board with the publication. Has any of this news changed your mind about what's really going on?

KW: I have yet to see a statement actually from Miss Lee. I have seen them from her agents, lawyer, publishers, etc., but I have not seen one directly from her. Every statement I have seen in support of the book release has been from someone who will likely have significant financial gain, not to mention the cache of bringing the book to market. So no, I don't believe it. No one has access to her to get the statements in the first place, just like they haven't had access to get signed copies of her books. Think about that.

They "found" it. If she wanted it released, why didn't she tell anyone where it was?

When a person has a stroke then suddenly has a falling out with the sister she has trusted to protect her interests for her entire life, that's a red flag to me (brain injury). When it's to the extent that they are in different nursing homes (and it's not like there's a plethora of them in a town of 6,000 people), I find that extremely disturbing--especially when the sister she trusted practiced law until age 100. And then there's a lawsuit out of the blue against a not-for-profit museum that's been around for over a decade? It tore me apart to read about this happening in Monroeville.

Regarding "sound mind and body," if that's the case, why does anyone have a power of attorney for her?

Finally, who am I going to trust--friends and family of 20+ years who have a history of protecting Harper Lee the way she consistently wanted as I experienced firsthand or a sudden slew of press releases from sycophants and vultures?


After a marketing career in the corporate world, Kristi Weldon became a technical writer and served as associate editor for Apparel Industry Magazine. She writes small-town contemporary romance as Kristine Bria and erotica as Kristi Hancock.She just completed her first novel.