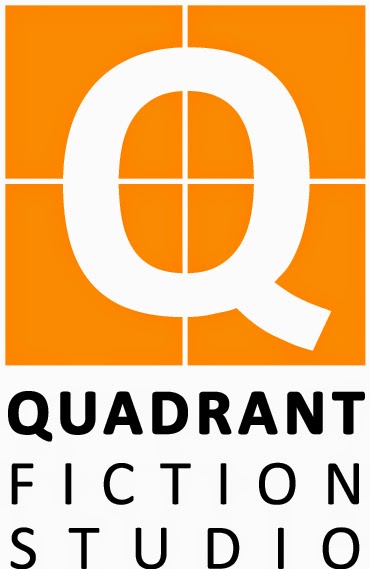 Today is the day the world learns what I’ve been doing for the past few months and I find it wholly appropriate to remove the curtain here at Do Some Damage.

Quadrant Fiction Studio is my new publishing company through which I will release the novels and other tales I write. I’m planning on releasing the first book next month. I'll announce the title and display the cover image in the coming weeks.

I've got a landing page at the new website: www.quadrantfictionstudio.com. I'll redesign it to its normal view when Book 01 launches. But you can see my vision for this endeavor.

I like the letter Q and decided to use it as the logo. So I started there. Next came the name. “Quadrant” was the first word that came to mind, Quadrant Press, that is. Well, that’s already taken. Quiver Press was another. I thought “thing that holds arrows” but the existing Quiver Press is rather more adult. Quill, of course, where I could have been cute and made the tail of the Q be the end of a feathered quill. Yeah, not good. And I even drew a picture of that one. Quire was one of my favorites--think of the in-person options of giving away quires of printed work--but it was suggested that more folks would think of the singing group.

All this time I was using the word "press" or "publisher.” Then, I started thinking of other terms. I kind of like the word “practice” as in “law practice,” but didn’t think “writing practice” sounded good. Artists, like my wife, work in a studio and that sounded better: Quadrant Studio. But, as you can imagine, that brings up visions of artists and not necessarily writing. So I threw the word “fiction” in there and viola.

The name also stood in for my vision of what I wanted to do. While this is a mystery blog, I read and watch more genres than just mysteries. I like westerns and science fiction and pulp and romances and historicals and...well, you can see how that might spiral out of control. My original idea was to have a “publishing house” (i.e., Quadrant) with four imprints, each with a specific genre and an associated ‘house name’ as authors, one of which was to be my own. I solicited the opinions of trusted folks and they steered me away from that. In the age of independent publishing, it’s really not necessary.

But the Quadrant idea held. So I plan on keeping the three main genres--mystery, western, science fiction--and leave the ‘fourth quadrant’ for whatever strikes my fancy. We’ll just see how close my fancy is to the buying/reading public.

When I had the four-genre thing going, I imagined I’d tie each genre with a color. Thus, I’d have a logo that represented that. It was a colorful logo, too. Much like the existing one, but with each ‘square’ a different color. Again, I got the opinion of trusted folks, including friends who are graphic designers. They liked it, but thought it looked like the logo of a kid’s book. Oops. Not the vibe I was going for.

So, I developed the logo you see now. It’s clean, two-colored, and relatively simple. Plus it has the benefit of fitting into the little squares on Facebook and Twitter. And, in the future, it’ll fit nicely on the spines of printed books.

Where Does the Road Lead Next?

I am busily working on the text of Book #1 and cleaning it up. I have a graphic designer who is creating my first book cover. If the stars align correctly, this first novella will be released next month. It’ll be electronic first with a print run coming later in the year. I’ll be using all available sources: Amazon, Kobo, Nook, iBooks, and CreateSpace.

From there, I have six other completed manuscripts. I’m writing a new one these first two months of 2015. I plan on maintaining a consistent output in the coming months and years.

It’s amazing just how much goes into getting a new company off the ground. It’s a challenge. It’s a ton of work. It’s a little scary. But most of all, it’s fun. So far, I’m enjoying every minute of it.

I will certainly make mistakes and they’ll all be in the public eye. C’est la vie. That’s the risk I take by doing this. But that means I’ll get the rewards, too.

It’s an exciting time here at the offices of Quadrant Fiction Studio. If you've got a moment today, head on over to the landing page and let me know what you think. Comments are welcome, good ones as well as constructive ones. It’s the only way I’ll learn what I’m doing right and what I can improve on.

I’ll leave you with the question that might end up being my theme: What Quadrant Are You?
Posted by Scott D. Parker at 1:00 AM

Looks good, Scott.
I really like the description you have for "my" quadrant - mystery!

Thanks, Kristi. My quadrant is mystery first, although I grew up a SF geek. Still am, although it's the one genre I haven't written yet. Give it time, however.