A couple of things before I begin. First, Bill Loehfelm's latest Maureen Coughlin novel, DOING THE DEVIL'S WORK, came out yesterday. It's one of my favorite series, so you might want to give it a try if you haven't already. It's always a good day when a new book in a great series comes out, wouldn't you say?

Second, for those of you grappling with writing goals and new year's resolution (and who among us isn't?) Travis Richardson has created a handy spreadsheet to record writing and reading goals and progress. Download it here.

Now, let's get down to business.

Some of you may know that I recently moved to Northern California so I could be closer to my family. Besides the obvious benefits, one of the things I've been looking forward to is joining my sister and childhood friend's book club. They've been doing it for awhile now, but because of distance, I really couldn't participate. 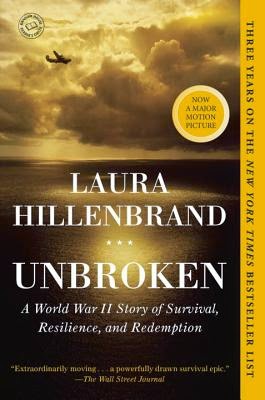 This month's book choice is UNBROKEN. With the movie coming out in December, the book has been talked about a lot lately, but I hadn't heard of it before they chose it for the book club. I'm about half-way through and enjoying it a lot. It's a compelling read, regardless of what I'm about to say.

I'm a fan of non-fiction, especially true crime. I've often cited Erik Larson, author of DEVIL IN THE WHITE CITY (and several others), as one of my writing influences. Truman Capote's IN COLD BLOOD is one of my favorite books of all time, and I've read pretty much every Black Dahlia book that gets written. I could go on, but you get the picture.

UNBROKEN isn't true crime, but the story is truly incredible. I mean really--I'm reading along and I can't believe that anyone could've survived everything that Louis Zamperini survived. The picture Laura Hillenbrand paints of war is horrific and rather matter of fact at the same time. To be honest, her style is a bit disconcerting to me.

When I first began the book, I couldn't shake the feeling that I was missing something. But what? Something about the story seemed hollow. I found I couldn't connect with Louie, not the way I wanted to, and not the way I need to if I was going to proceed with the book. Truthfully, I might've put it down permanently if my book club hadn't chosen it. For that reason I'm glad they did because as I've continued reading, I realize it's worth the time. Well worth it.

Midway through, I've made it to some of the most intense parts of Zamperini's story, and let me tell you, it's a doozy. But even so, there's still that feeling that I'm missing something. I couldn't figure it out until I read an article published in the New York Times about Laura Hillenbrand. It's a long one, but as a writer (and a reader) I found it interesting.

There is a passage in this article discussing the nonfiction authors who began to appear in the nineties: Jon Krakauer, Erik Larson, Sebastian Junger, Susan Orlean, etc. Writers who strayed away from the stylistic flourishes of authors like Norman Mailer and Tom Wolfe by simply telling a good story. They don't participate in the story, they get out of its way.

Hillenbrand doesn't insert herself into UNBROKEN's narrative, nor should she. She doesn't pass judgement and she makes no assumptions. She reports the facts as they are. The problem, I realize, is that to a large extent, Zamperini isn't quite inserted either. And that, I discovered, is what's missing for me.

Here's what I mean by that: there's no internal dialogue, not enough reaction to what's happening to Zamperini, even from Zamperini himself. I understand that Hillenbrand, through hundreds of hours of interviews and research, reported his story as he told it. He might not've conveyed great emotion about everything that happened to him--after all, sixty-plus years had passed between the events he experienced and the conversations he had with Hillenbrand. She couldn't make assumptions about how he felt, she could only write his story as he told it, filling in some of the gaps with technical and historical research.

It's a conundrum, I know. Hillenbrand tells Zamperini's story eloquently and well. At one point, when he and his fellow POWs are literally starving to death in a Japanese prison came, she describes it as the men's bodies "digesting themselves," which really stood out to me as a perfect way to express what was happening. So this post isn't so much a criticism as it is an observation of my own expectations as a reader (and to a large extent, a writer). I don't want Hillenbrand to insert herself. I want her to stay out the way. But somehow, I need confirmation--or validation--of my feelings about what I'm reading through the reactions and emotions of the characters.

I'm willing to concede that my need for more from UNBROKEN is my own problem and one that many readers might not share. But I mention it here because I think it's something to keep in mind when we're writing fiction. How many times did I query agents who rejected the manuscript because they "couldn't connect" with my protagonist? Too many times to count, actually. The first drafts of MISTRESS OF FORTUNE were deficient in character observation and reaction. How did they feel about what was happening to them? What was their take on it? Once I added some internal dialogue and "reaction shots" (as I like to think of them), the story became more compelling.

I'm interested to hear what you think about this discussion. Hit me up in the comments, please.

I think internal monolog is overrated. I'm not saying it shouldn't be there or that it's not important, but that there are ways to show what the character is thinking, or how she feels about what's going on. When done well, it can be great, but there's a tendency for a lot of authors to worry the reader isn't really getting how the character feels from what she says or does, so I'm going to tell them. After that, the temptation is to tell them and tell them and tell them. It stops the story, and rarely tells us too much about the character we couldn't have found out some other way.

There are lots of ways to give characters depth, of course, not just internal dialogue. I just use it here as an example.

I have UNBROKEN on my Kindle; I haven't gotten to it yet, but I will.

I'm wondering if it's the World War II generation. I've done a couple of biographies of men who were born in the 1920s (and businessmen, not creatives/intellectuals), and it was very difficult for them to be introspective/reflective about their lives. They weren't raised in an era that encouraged them to own the feelings, especially during harsh times. As a result, I often had to read and interpret things in between the lines.

Do you think that perhaps the author had to present the story in way that you, the reader, had to do some interpretation for yourself?

I felt a bit of distance with unbroken too. My feeling on non-fiction is that if you're interviewing a living person and have it in their words, in your notes or transcripts for example, I want to hear that. I'm more interested in hearing it straight from his mouth than I am in have the author work it into a narrative. I guess I'm always suspicious. How did you know that? Did they really say that's? Where the proof? If I get it as a direct quote, I buy it more.
And the spot you are in the book is where it ground to a halt for me. It's just repetitive from there and she works too hard to portray Louie as a super hero type. I get it, he's been through a lot. Sheesh. War is hell and all that.

Your comment cracked me up, Eric. I'm at the part where they're on their way home, so I haven't quite felt the repetition yet.

Naomi, yes--that's the way it's written, I have to kind of interpret his feelings myself. Which is fine, I guess. I'm able to empathize with what he's going through, and there are a few places where it's clear how he feels about his experiences. At one point he says that if he'd known in advance all he'd have to go through, he'd have killed himself. Which says A LOT about how terrible it all was.

I should probably say that it's not as if I want to be hit over the head with Zamperini's feelings/reactions to his ordeal. I just want a little more than I'm getting.

I haven't read the book, but I know what your talking about when it feels like factual reporting and is missing the feeling. On the other extreme, Theodore Rex by Edmund Morris, is over the top with internal thoughts, smells and other nearly impossible to document assumptions in a rapid narrative. I assume it was documented through diaries or reports, but I remember getting angry thinking "you aren't supposed to do biographies this way."