Plotting Via the Capri Method

If the two camps of writers consist of pantsers and plotters, call me more of a capri.

Back in 2005, I got asked a question by a co-worker/aspiring writer: “Will you read chapters of my book?” My answer was simple: “Sure, if you read mine.”

Crap. Now I had to produce. I had nothing on paper and needed a direction. Knowing nothing really about writing other than what it took to write my thesis, I bought a comp book, different color pens, and a stack of note cards. I then proceeded to brainstorm about the story I wanted to write. I had in mind a single scene, but I didn’t know where it went. I knew it wasn’t first, so I wrote a bunch of scenes that lead up to it (it was a big reveal) and then the outro from it. Each card was a scene, color-coded per POV character, and, after I had the whole story outlined, I started writing.

What was good about that process is that each night at 10pm—the only time I had to write—I picked up the next card and wrote just that scene. Since I knew where I came from and where the story was going, I could foreshadow or refer back to other things. The only stumbling block I got was from my critique group: “Hey, what are the other bad guys doing during all of this?” I told them and they said to write it down and put it in the book. I did and I finished my first novel using the outline/plotter way.

So, the next seven years, I tried NOT doing it that way. I finished nothing.

Lesson learned. Last year, after I wrote a novella—my first finished piece of any length; you’ll see it in 2015—I needed something else to continued my writing streak. I picked up an unfinished novel and wrote the next chapter. Liking the story again, I sat down and remembered how well the index card method worked for me back in 2005. You know, you dance with them that brung ya. Thus, before writing another word, I outlined the story. Granted, I didn’t get to the end. I only outlined to the midpoint, but I had my road map. Boom, I was off like a flash. Once I got to said midpoint, taking a few deviations along the way, I outlined the rest of the story.

Again, a few deviations were met with pauses and more outlining, but basically I realized that, for me, an outline/scene breakdown/roadmap is the way I write best.

Proof? I finished that novel.

Then wrote another novel (starting the very next day) with the same method.

Then wrote another novella (longer this time, 34,000 words) with the same method.

Then wrote another novella of 29,000 words with the same method.

Then wrote a short novel (approximately 60,000 words) with the same method that I’ll finish this weekend or next week.

Lesson learned: I am a plotter. With the caveat that I freely let myself drift off course if the story dictates it. But here’s the key factor for me: If I drift, I still plot. Let me explain.

I have a bunch of scenes mapped out, either to the end or some point before the end. Doesn’t matter. In the course of the actual storytelling, characters start to get some of their own personality and not just be cardboard cutouts being moved by me. When the story takes a turn I didn’t foresee, I take a step into that new path. But only a step. I then stop and ponder the new direction in light of what I’ve already written, what I’ve already planned, and then decide if the new path is worth taking. Sometimes yes, sometimes no.

This process, while it may sound clean, can be rather messy. But it seems to work for me. When I do action scenes, I actually have to choreograph the scene and break it down into smaller chunks. But I get there.

For an example of how this works for me, here’s a shot of the current WIP’s index cards/post-it notes, etc. in my writing room. 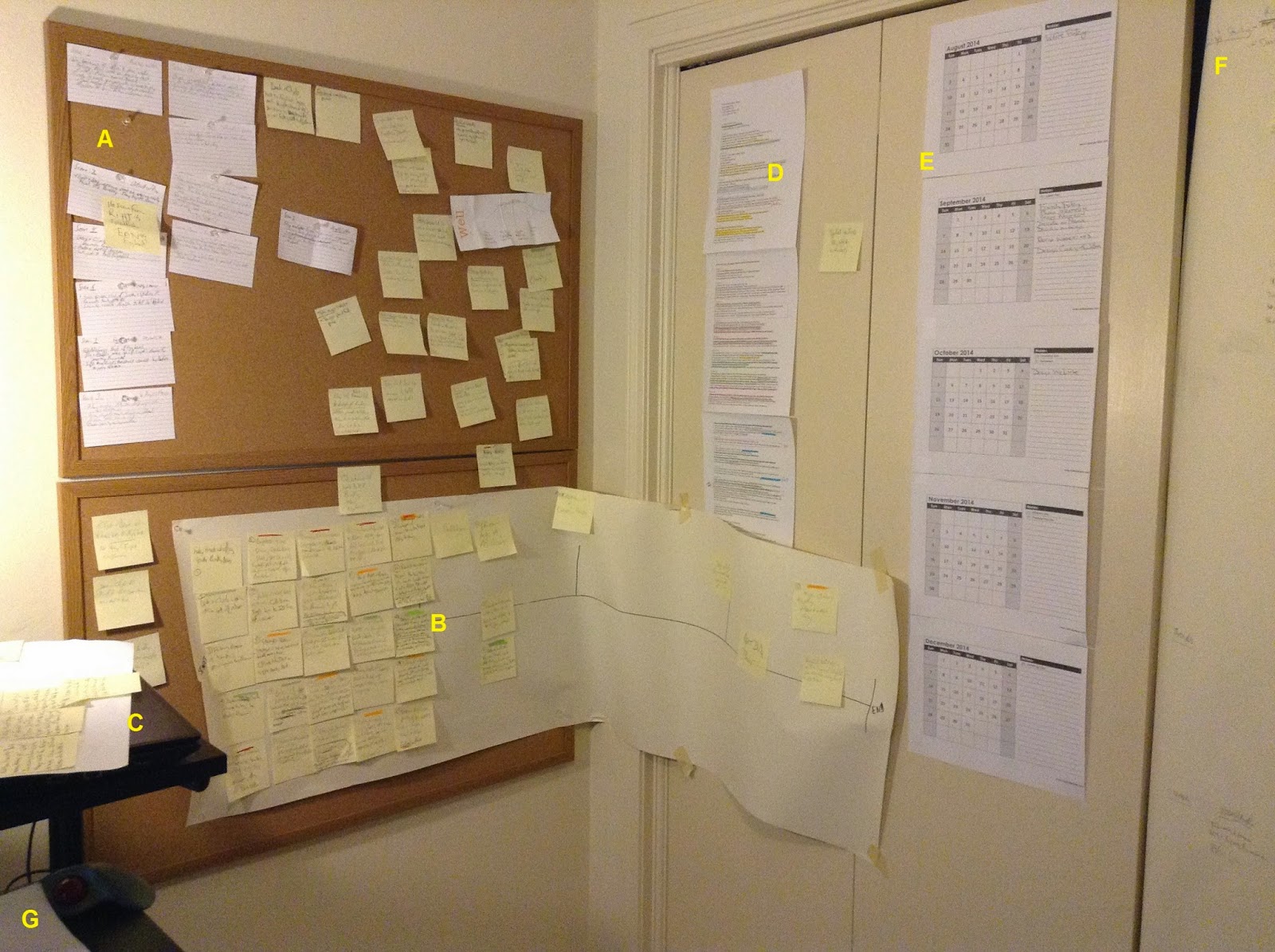 I love talking strategy and processes. I use Scrivener exclusively to port most of this stuff into electronic format. As I mentioned in a previous post, I also copy/paste my active WIP into Google Docs so I can write on the go.

What are your favorite techniques?
Posted by Scott D. Parker at 1:00 AM

This is fantastic! Nice to meet another plotting nerd like myself! And the photo is great. I'm inspired just reading your post, Scott!

Love the Capri concept. I'm totally a plotter - like you, if I don't have a plan to where I'm going and how I'm getting there, it's hard for me to sit down and write. And like you, I don't feel like this restricts me one bit.

Great post! I love it when another author shares his/her process. Regarding taking a step into possible plot-lines I know exactly what you mean. This happens to me often as writing kindof fires my imagination and thats when magic happens.