The super cool and awesome Laura Lippman prompted a Twitter discussion yesterday about plotting that Jay Stringer and I jumped on. And then decided the topic was perfect for Do Some Damage.

A few of us, possibly all of us, are going to blog about plotting this week. I'll kick it off.

I was asked this week on a Spreecast with other WitnessImpulse authors whether I began writing my novel's knowing the bad guy's motive.

My answer was yes.

I'm a plotter, not a pantser.

I'm incredibly jealous of "pantsers" — defined as writers who fly by the seat of their pants in writing and don't outline or plot ahead of time. I can't do that.

I must know where I am going before I put that first word down on paper.

But I don't write a detailed thirty-page synopsis of the entire book (and there are some writers who do this) but I usually know a few key scenes in my novel before I begin.

I've read many books on plotting and three-act structure, including SAVE THE CAT and WHAT

But the ones I turn to time and again are these two: STORY ENGINEERING by Larry Brooks and PLOT & STRUCTURE by James Scott Bell.

Both books explain three-act structure, the common way most books and films are plotted. To sum it up, the story is broken into three (or four) parts.

The first act is often the first 25 percent of the novel where the writer is introducing the characters and the story problem. In this section, the reader learns about what obstacles the protagonist faces in achieving her goals. It is a bit of the normal, ordinary life of our hero.

For instance in Harry Potter, we see how bad he is treated in the Muggle world.

Right between the first act and the second act is the FIRST PLOT POINT. James Scott Bell calls this the doorway of no return—once your character steps through this door, his life will never be the same again. Everything is different.

In Harry Potter, this moment is marked by when he goes through the wall to get to the train platform leading to Hogwart's train.  He's taken a step and his life will never be the same again.

In my novels, before I sit down to write, I must know the first plot point, which is essentially the reason for the book — the quest or journey that Gabriella Giovanni goes on.

Larry Brooks defines it this way: "... the moment of change in the story that define's the hero's quest and need going forward, and does so in the face of an antagonistic force that the reader suddenly understands to an extent that empathy and emotion are evoked, while creating obstacles to the hero's quest, and thus creating stakes that depend on the hero's ability to overcome those obstacles."

He says it can be a moment or a sequence of scenes.

During Act II, our hero is usually reacting to the antagonist. Usually the hero is not going after the bad buy in this part, or if she is, she's not doing it very well and keeps facing a series of setbacks. It's not until Act III that this usually changes.

As you might have been able to guess, the SECOND PLOT POINT occurs right between acts two and three. This is the moment where some key information is revealed and our hero goes on the attack. Usually the rule of thumb is that once you are into Act III you can't introduce any brand new characters or information that hasn't at the very least, been hinted at previously.

In the third act, THE ATTACK, the hero goes after the bad guy and—in most books—wins.

By the way, there is also the MIDPOINT, which is smack dab in the middle of your novel and usually involves some revelation that turns everything upside down. I won't go into it in this already-too-long blog post.

So before I write, I have a huge stack of index cards. One has my first plot point, one has my second plot point, and so on. In addition, I usually have my opening scene. As I write, each index card becomes a chapter. I write what happens, where it happens, and what day of the week it is. (See picture for example)

If I'm stuck drafting, I might take a stack of index cards to the coffee shop, load up on caffeine and brainstorm possible scenes, putting each one on a separate index card and then figuring out how they fit in my story. 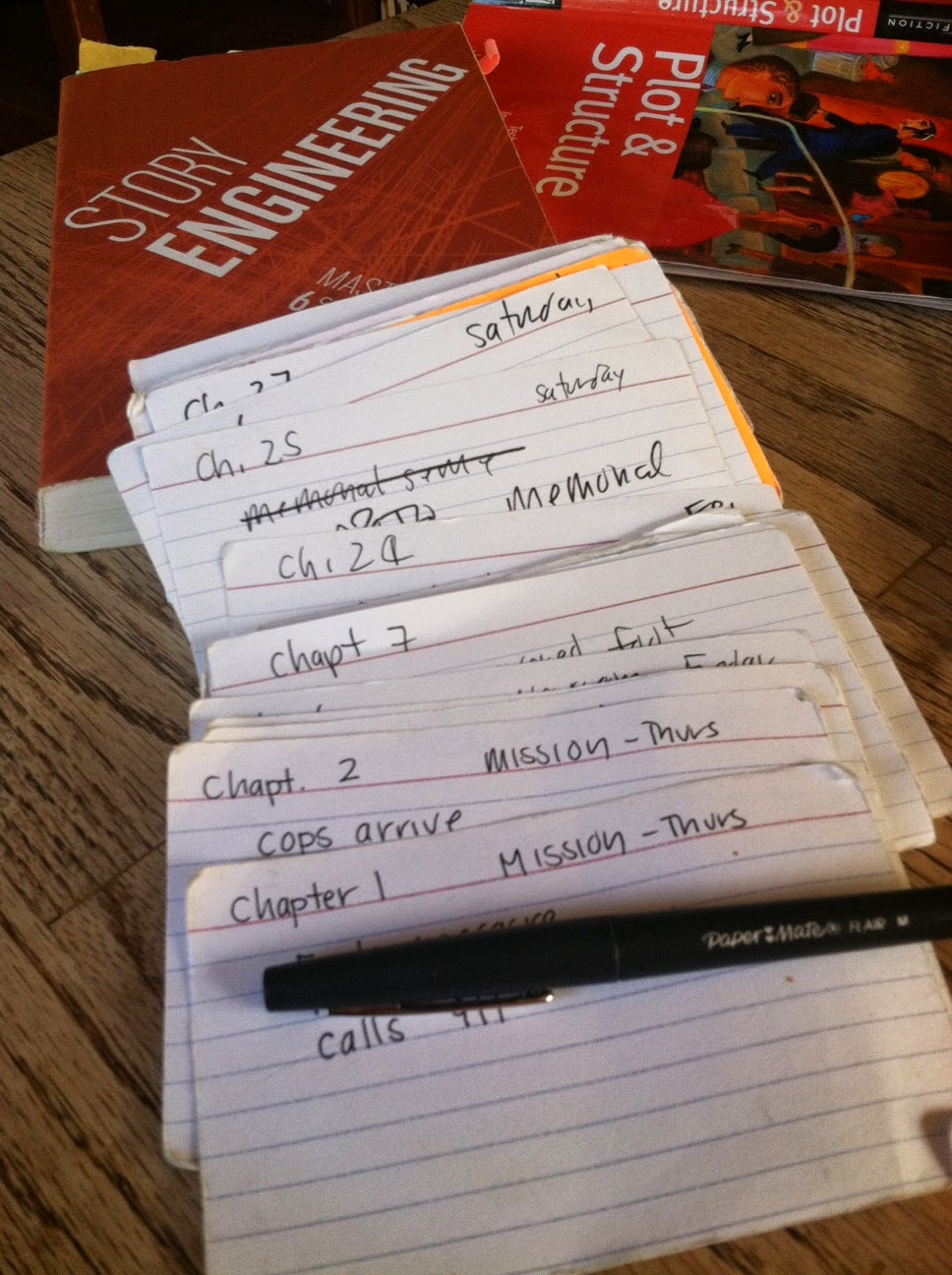 That is the beauty of index cards, you can rearrange scenes and chapters in a visual way. For me, this really works. Also, I carry them around in my bag (secured with a rubber band) and pull them out when I'm bored or inspired.

When I finish a first draft I like to plug my story into one of several Xcel programs that outline exactly at what page number and word count my novel SHOULD be hitting these key points. (This link contains a wealth of information on worksheets for plotting http://jamigold.com/for-writers/worksheets-for-writers/)

Okay, that's all for the first post on plotting. I hope some of it might be helpful. Stay tuned this week and next for more posts on plotting. And I'd love to hear your thoughts in the comments. Pictures are welcome!

Okay, so next Saturday, when it's my turn to play this game, I'm just going to link back to your post here. :-) Actually, I have some variations that I've developed but essentially, it's the same. The current WIP--I'm writing the finale this weekend--went along swimmingly using a method very close to this. I was at an art opening last night and the artist commented that she sketched out the ideas ahead of time and then put paint to canvas. I chuckled because I was right there with her.

Scott,
Do you use index cards? And which plotting method do you use? Talk about that -- I sort of vary it, but mostly Larry Brooks stuff. I'm super interested in reading all the other DSD authors post on this. Nerdy about it! I love it.

You're jealous of pansters? That's funny because I've spent months being jealous of plotters, finally settling on a little of both. A little plotting, followed by a little pantsing, etc. It's slow-going, and I hope to one day plot an entire book before sitting down to write it, but for now this is what works. I tried index cards but ultimately went back to a spreadsheet (Excel nerd here) for easy visual rearrangement of scenes and tracking them.

I love reading about how other authors approach plotting. We're all aiming for the same goal but reach it in slightly different ways, and I'm always open to new ideas. As always, thanks for sharing, Kristi, and I look forward to the other posts on this topic, too.

Thanks David.
Also, when you get a chance shoot me an email and give me an update on how things are going.
K

Yes, I use index cards, 3x5. I also use post-it notes on a huge piece of white paper. I'll provide a picture of that on Saturday. There's also the dialogue thing I have with myself. Perhaps I'll reveal that secret on Saturday, too.