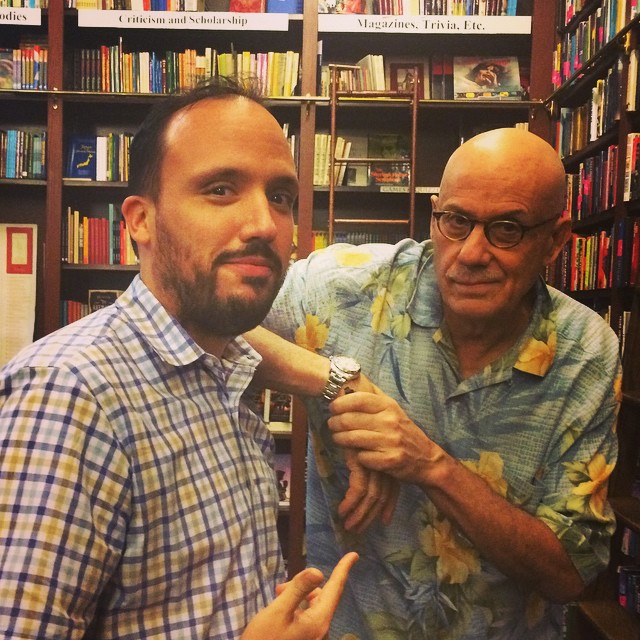 I've had the honor of meeting a lot of authors and creative people I admire - in comics, literature and music. As a publicist (my day job), you have to steel yourself a bit, because the last thing you want to do in a professional setting is geek out about someone you're working with. That being said, I think all of us have other writers we hold up as pseudo-rock stars. We read all their work. They were hugely influential to us, etc.

Last night, I got to listen to James Ellroy read from his latest (and he'll tell you his greatest) novel, Perfidia, at The Mysterious Bookshop. I had a blast. It was something I'd been looking forward to for months and was kind of nervous about. I've read almost every word Ellroy's published and he - along with Pelecanos, Lehane, Block, Lippman and a few others - are on that list for me. Authors that I not only admire, but point to as huge influences and reasons for me even considering the idea of becoming a novelist myself.

So, yeah, this was a big deal. But it got me to thinking about idols and mentors and putting people up on a pedestal - and the downside of that. I've been lucky enough to meet most of the living authors I look up to and feel inspired by, but what I found most rewarding from those exchanges is discover the writers were funny, charming and friendly - they're people, too. It sounds silly to type, but it's the truth. Yes, they have foibles, bad days and their own problems. But we all do.

I think you gain a lot more being in the moment and enjoying a quick conversation with someone whose work you greatly admire as opposed to building it up to be something it can never be - or being disappointed at the end result because it didn't meet some unrealistic expectation.

Anyway, this was a quickie, mostly because I'm curious to hear stories from you guys about similar instances and how they went. Have you had positive or not-so-positive moments with authors you look up to?
Posted by Alex Segura at 1:09 PM