All's Fair in Art and War

A couple of weeks ago, my husband and I watched Tim's Vermeer. This documentary follows inventor Tim Jenison in his quest to understand the painting techniques employed by Dutch master Johannes Vermeer, who lived and painted in Holland from 1632-1665. Jenison's theory is that Vermeer used optical devices to achieve photorealism in his paintings.


I must admit: Jenison presents a compelling case. He begins by asserting that Vermeer could not have achieved the shadowing and light effects apparent in his paintings by using his painterly eyes alone--that in fact, the human eye is incapable of registering these details without some assistance. Jenison tests his theory by creating an optical device similar to one that Vermeer might've used and proceeds to paint a picture from a photograph of his grandfather. Jenison has no previous painting experience and yet the results are astounding. 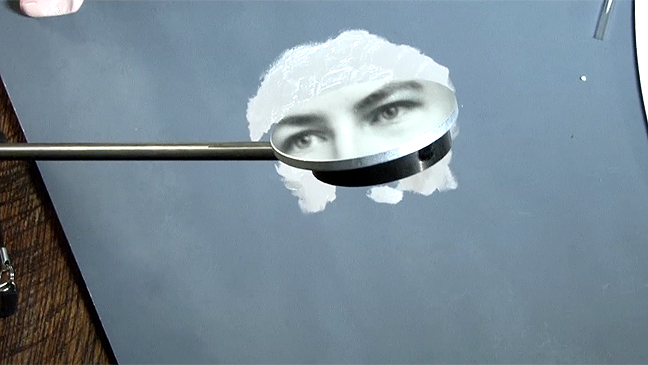 It has long been argued that Vermeer used some sort of optical device in his work. But Jenison was the first to figure out exactly what that device might've been. The comparator, largely forgotten since Vermeer's time, is basically a mirror that shows a subject reflected from across the room. The canvas is visible from the edge of the mirror, and it allows the painter to compare paint color to the image being painted. Little technique is required, just patience, the ability to discern colors from one another and perhaps, a steady hand.

Buoyed by his success, Jenison decides to paint Vermeer's The Music Lesson using his optical device. Being rather detail oriented, he spares no expense in the project: he rents a warehouse and painstakingly re-creates Vermeer's studio. To the extent he can, he only uses materials that would've been available in the 17th century. It took him seven months to finish his version of Vermeer's masterpiece.

I won't reveal his finished painting here, as it amounts to a spoiler, I think. But I will say that you'd be hard-pressed to tell Jenison's version from the original. If you're interested in this subject I suggest that you watch the documentary--it's fascinating.

This brings up some important questions: Did Tim Jenison "cheat" when he created his Vermeer? And if Vermeer used a device similar to the comparator, did he cheat, too? Indeed, is there even such a thing as cheating in the creation of art? If so, where do we draw the line?

As a painter myself, I've used grids, tracings, and other methods to transfer an image to a canvas. None of these methods strike me as cheating, exactly, but shouldn't a true artist be able to just draw/paint what he or she sees? Maybe not.

One could even argue that Jenison cheated because we know he used an optical device. Since we've no proof that Vermeer did, maybe he didn't cheat.

Does it even matter?

If you've seen the documentary (and even if you haven't) I'm very interested in hearing your thoughts on the matter. Because honestly, I can't decide if Jenison cheated or not.
Posted by Holly West at 3:00 AM

This documentary has been on my list of things to watch for a while now. You have just inspired me to give it a shot sooner (maybe this weekend). I love Vermeer's work so much

Me too. Let me know how you like it if you do see it.

My wife and I just watched this a few weeks ago as well. I give Jensen credit for coming up with his historical insights, and as an inventor following his passion - er, obsession - to create his painting. I can identify with the need to push on with a thing, despite being "lost in the crazy" of its creation. But I think Vermeer's work comes from Gift, not Gimmick. I think that is why so many generations have been drawn to his work.

It's an interesting question. When I think of cheating I usually think about the goal - you cheat to get something that you otherwise wouldn't get.

So, what's the goal? Does it matter to people who get something out of the painting how that painting came to be?

Intent seems important to me. If the intent is to cheat, to achieve something you claim to produce while feeling that you're doing wrong, is key. If an optical device was merely Vermeer's technique, than I wouldn't see that as cheating. If he used it and hid its use, that would be another question.

Good points! Maybe "cheating" isn't the right word to use. Perhaps a better way to say it is that art and technology often intersect--even as writers we have tools to make our jobs easier. The question is when does the technology overtake the art? One thing I overlooked in this post was the idea that artists compose their paintings--setting, color, positioning--this is an integral part of what art is. Vermeer might've used an optical device to get the image onto canvas, but that doesn't take anything away from his composition.