A Little Bit About Mistress of Lies

Before I begin, I'd like to point out two posts by my fellow DSDers that I liked this week:

Escaping the Politics of Writing
Sandra Ruttan examines the Hachette/Amazon dispute and makes what I believe are some good points.

Debut Author Month in Pictures
Krisit Belcamino shares some of the highlights of having a book out. Being a debut author is fun!

Soon, I won't be a debut author anymore. On September 29, 2014, my second book, Mistress of Lies comes out. I want to savor the experience as much as possible, because it'll probably be a long time before another book is published. 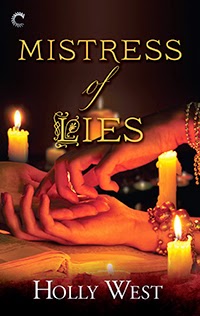 I don't say that to be pessimistic. It's a fact. I don't plan on pursuing a contract for another Mistress of Fortune book and I'm only half-way through my first draft for a new series which will (hopefully) find a home with a new publisher. Despite the fact that I'll have two books out in 2014, things take time in the publishing world. Lots. Of. Time.

Mistress of Lies started out being a hard book to write. Let's not consider that, me being me, I made it a lot harder than it had to be. I talked to enough writers to know that for some reason, the second book is usually a tough one. While having a contract for a second book is terrific (I kind of wish I had one now), it's also daunting. Deadlines, you know? You have all the time in the world to write the first book and suddenly you've got six months to write the second one. It's skeery.

The first book, Mistress of Fortune, deals with court intrigue and a political conspiracy that rocked the English monarchy at the time (1678). It was a lot for me to bite off, especially since I'd never written a novel before. But I chewed and chewed and chewed and finally got that thing written. It's nearly exactly the book I wanted to write, but it's about as far from the "write what you know" advice aspiring authors always receive as you can get.

In Mistress of Lies, I decided to write a little bit about what I know. The story is more personal for my protagonist, Isabel Wilde, and while it still includes many of the same elements that make Mistress of Fortune memorable (intrigue and conniving at court, trysts with the king of England, that sort of thing) it stays closer to home in that Isabel must investigate the possible murder of her older brother, Adam, twelve years after it happened. When she learns that he might not have been as noble as she thought, she wonders if the truth is better left buried.

It's no accident that in the book, Adam was a goldsmith. I studied goldsmithing for several years under the tutelage of a master jeweler, Ralph Goldstein. Mistress of Lies is dedicated to Ralph, because he taught me the trade that inspired the story. I'm proud of the fact that I can make a ring using the same tools and techniques that Adam used in the 1600s.

17th century goldsmiths laid the groundwork for the banking system we use today. Historically, most merchants and nobles kept their gold in the Tower for safekeeping. But when King Charles I needed money to pay for his war with Scotland in 1639, he confiscated it. Though it was eventually returned, wealthy citizens who didn’t want their gold taken every time war broke out began placing their bullion with goldsmiths, who had the means to secure precious goods in their personal vaults. The goldsmiths issued receipts in the form of notes, promising payment upon demand. In time, it became customary for merchants and tradesmen to exchange these receipts instead of the gold itself, and eventually, the goldsmiths began reinvesting the gold on behalf of the depositor, with interest.

In the midst of the chaos wreaked by the Great Plague in 1665, I figured an enterprising young goldsmith banker could get up to some trouble. What could possibly go wrong?

Mistress of Lies is available for pre-order now.
Posted by Holly West at 3:00 AM

That's a hell of a story idea, and a great way to show the timelessness of some human failings.