The Fog of Memory

So, I’m writing these historical mysteries now, set in the 1970s and I’m reading a lot of newspapers from the time – newspapers I delivered at the time – and I’m finding a few things that didn’t happen the way I believed they did.

Here’s an example. In October of 1970 in response to a couple of high-profile kidnappings and a murder the Canadian army was in the streets of Montreal. Jeeps, tanks, sandbags, the whole thing. And I remember that during that time my brother took me to the Montreal Forum to see an exhibition game between the Montreal Junior Canadiens and the Soviet national team. 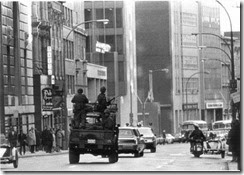 The juniors won the game 6-3 but I remember thinking how different the third period was from the first two. At the end of the second period the Canadiens led 6-1. But the Soviets had the puck for pretty much the whole third period and scored the only two goals.

I remember people joking at the time about how at home the Soviets must have felt with the army in the streets and talking more seriously about what they must have really thought about that. The western world sure looked shaky at the time.

But here’s the thing – that game actually happened in 1969. There was no army in the streets then.

Still, I thought about putting that in Black Rock – could be a cool scene, the young cop taking his little brother to the game. Who’d know it wasn’t the right year? And who’d care, it’s fiction afterall.

But I chose to stick as close as possible to the actual time line of events as they happened. But I don’t think it matters, I think when something is fictionalized it can be as much or as little fictionalized as the author wants.

Here’s something – Stephen King and James Ellroy both wrote about the assassination of JFK. When I finished reading Ellroy’s account I believed that there was a widespread conspiracy involving the mafia and the CIA and Cuban exiles. And when I read King’s version I believed that Oswald acted alone.

So did one of them fictionalize the material too much? Or just enough…

I enjoy setting stories in the recent past, because the tricks that memory can play are fascinating. It's worth the risk of getting something wrong.

Vladimir Nabokov touched on the fog of memory in his bio, Speak, Memory. And his The Real Life of Sebastian Knight also touches on how the ripples in time have a habit of changing. How we sometimes prefer what our distorted memory has done with history.
Sharp post, John. And to answer your question I will quote Robert Evans: There are three sides to every story - yours, mine, and the truth. And no one is lying. Memories shared serve each differently.