This will be a shorter post that is both a continuation of a past topic I wrote about here and a bit of thinking out loud.

In 1985 Alison Bechdel proposed a simple test for gender bias in movies. Does the movie have 1) at least two women in it who 2) talk to each other about 3) something besides a man. Recently we have seen the Mako Mori Test which was created because the movie Pacific Rim failed the Bechdel Test but did a lot of other things right and the titular character became a favorite among women. 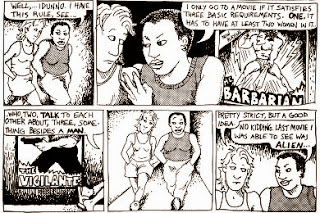 In the past I've written about story possibilities left unexplored because of a narrow gender focus ("The Patriarchy of Crime Fiction") today I want to talk about a specific version of this and, in the spirit of the above named tests, give it a name. I propose that some crime stories fall victim to The Connie Corleone effect.

The Connie Corleone effect is when a female character is prevented from running a criminal organization because of inherent sexism in the organization itself, and the culture surrounding it, even though she is equally or more qualified then her male counter parts.

The first, obviously, is Connie Corleone. Connie's story arc is one of the more interesting ones in a story filled with interesting arcs. She eventually settles into the role of adviser to the head of the family (her brother) and paves the way for the next head of the family (another brother's illegitimate son). I have to wonder about the story possibilities if she was given control of the family instead of a behind the scenes position of intrigue and counsel. Given how much her life and her character was forged directly by the family business it could have been incredibly rewarding fiction to see her take that position. 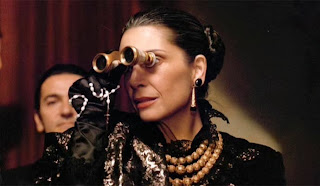 Another prominent example of the Connie Corleone effect is in The Wire.  After Avon goes to jail, and Stringer is trying to hold the organization together, I couldn't help but wonder about Avon's sister, Brianna Barksdale, taking over. She's got great knowledge of the game, knows about the NY connections, and has a strong streak of putting the business first that runs through her.  She does, in many respects, come closer to taking over then Connie does, becoming in effect a co-runner of the business with Stringer Bell. But it's still a great "what if" game to imagine if she took over fully. 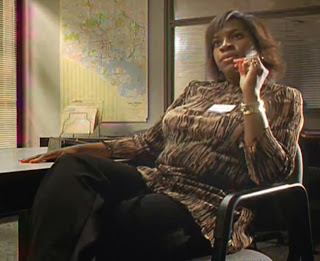 At the very least these two women were capable of taking over, but were never fully given the chance to do so. In fact, the reins of power were handed over to someone either not in the family or partially in the family rather then give them to the women.

What I'm arguing here is the same as what I argued over a year ago, that authors should examine all narrative possibilities. Plus I'm just thinking out loud.
Posted by Brian Lindenmuth at 4:00 AM

While I love the idea of a woman being in charge, you're going to run up against the problem of men who don't want to take orders from a woman.

They won't care if she's smart enough to run things, they're simply not going to believe that she'll be able to keep everyone in line or be able to stand up against the competition.

And then there's the idea that every man there is going to want to bed her down and you're dealing with jealousy and rejection.

Just a couple thoughts on why it might not work. On the other hand, if you had a crew of women you might have something. :)

Maybe, but aren't all of those things interesting to explore?

Well, I've spent a couple of books positioning Gayle to take over at least one chapter of the Saints of Hell and then in Tumblin' Dice... well, that's enough self-promotion.

But I am thinking of writing a short story where she's shown to be the power behind the crack-smoking mayor, but you're right, no one would believe Toronto's mayor... oh right, it's the woman running the criminal enterprise we wouldn't believe.

I agree that it would be interesting to explore but will your readers go with you? Could men actually believe in a woman leading a crime organization?

Most of the women in real life and fiction who have succeeded in running a crime organization have been mothers with sons as the followers.

Good post and it's something I played with a little bit in the Miller trilogy. There was a trap I walked into/fell into, in that the trilogy is first person from a male point of view, so some of the implications of having a woman in charge could never be touched on, because the story was always coloured by how Miller saw it.

And I think in Old Gold I did it in too much of a showy way, setting up a certain world view for the first third then turning it on it's head in on scene. But live and learn.

I want to play with idea more, when I have a good story for it.