Friend of the blog (and personal friend) Dana King’s novel Grind Joint launches this week and I highly recommend it. It’s really my kind of book; fast pace, a big cast of characters, good guys and bad guys – some of each are cops and criminals – and that phrase that has become a sometimes meaningless one, but isn’t here, “Setting as a character.”

The setting in Grind Joint is a small western Pennsylvania town called Penns River. I’m told it’s an amalgamation of a couple of towns but after reading the book it’s a very real place to me.
Most of my knowledge about America comes from the media – books, movies, TV, magazines, etc., – and they have always had this image of the “small town” as almost saintly. The biggest fear in “It’s a Wonderful Life,” is that Bedford Falls might become Pottersville. Imagine how terrible that would be, a small town with gambling and drinking and all kinds of unsavoury characters. They might as well open a casino.

Recently I read a very good book by Hardy Green called, Company Town. It’s a history of the two kinds of company towns that were most common; the one Tennesse Ernie Ford sings about in “Sixteen Tons” (one of my Mom’s favourites) where the company owned everything (even your soul, Ernie would say) and the attempted utopias built by would-be social engineers. I guess the book’s subtitle says it best: The Industrial Edens and Satanic Mills That Shaped the American Economy.

The stories of the two kinds of towns are fascinating, but it’s that last part of the subtitle that’s most important, I think: That Shaped the American Economy. If that’s true, then what’s shaping the economy today?
Grind Joint is getting all the right name checks, everything from Elmore Leonard to George V. Higgins to The Wire but the one that I really like to see mentioned is K.C. Constantine. 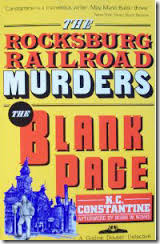 Sure, the most obvious comparison is that they’re both crime novels set in small-town Pennsylvania and they’re both really good. But taken together they really show what’s happened over the last forty years. Here’s a hint – it’s not good.
But I don’t want to make it sound like Grind Joint (or the novels of K. C. Constantine for that matter) are wallowing in self-pity or spend all their time pining for a better time. Previous eras weren’t perfect, we all know that. Bedford Falls was a Hollywood creation.
The people of Penns River, though, like Rocksburg, aren’t giving up. In Penn’s River 2013 the people have had a few of decades to deal with what was new in Rocksburg in the 70s and they’re making their way.
I’m already looking forward to the next book in this series.
Posted by John McFetridge at 2:09 AM