Author Etiquette: To Thank or Not To Thank

First, let me thank everyone who came out to the NYC reading at The Mysterious Bookshop recently. 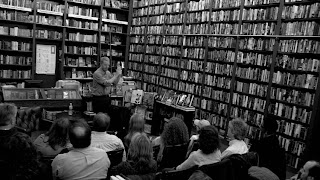 We had a great time. I read "Purple Hulls" from Country Hardball and then we did an audience-participation segment, acting out various scenes from the novel. Folks were pretty cool about it, though one of the volunteers begged out after being told what the story was about.
Totally fine. No one is judging you, Peter J.

If you weren't able to come, you can still snag a signed copy from The Mysterious Bookshop and from Fountain Bookstore in Richmond, where we did the launch on November 20.

Also, I hid a copy in FAO Scwartz (near Iron Man) and one in a pizza place (I forget which one) in Midtown. Both are signed.

So I'd like to say thanks again to everyone who came out and those who wanted to, but couldn't -- especially if you bought the book. *winks charminglyish*

Also, thank you for reading along with us at DSD.

And thanks to Eva Dolan for coming along with us. Sad to see her leave.

Next week, Holly West joins the team. And for that, we are thankful.

And speaking of thanks, we were chatting this week on Twitter and Facebook about whether it was a good idea for authors to thank book reviewers, specifically for a good review of the author's book.

CheffoJeffo, a book blogger, had some thoughts following the discussion. Also, @popqueenie had some smart things to say from the reviewer side of things

I'm sure others have, too.

Basically what we're talking about is this:

Does Jenny email Mike to thank him? If so, what does that email look like?

"Mike, thanks for the nice review of my book. I am glad that you enjoyed it. Cheers, Jenny."

Is that cool? It seems most everyone agrees that thanking a reviewer is a good idea. Hell, I figure most authors are like me in that they're pleased as hell that a reviewer went to the trouble to read and review. I've written many reviews, especially here on DSD. Authors don't always say "thanks," though I figure they appreciate it. Of course, I don't review a book to make the author happy. I review a book because I loved the book and want other people to know about this piece of awesome that they might enjoy. Still, it is nice to be thanked. But it can be kinda weird, too.

(By the way, I do realize I should put this in a "10 Things" post with GIFs and snark. I ain't gonna. But I realize that I should for teh internet.)

Laura K. Curtis, whose Twisted just hit shelves, said she'd gotten the impression that some reviewers felt as if they were being stalked, as if they couldn't be as free with reviews if they knew the author was watching them. 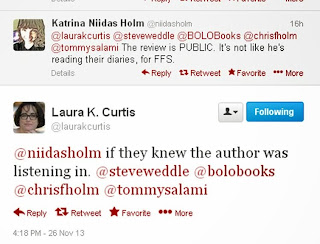 If you're reviewing a book and worried what the author will think, does that impact your review?

Also, if you're friends with the author -- or enemies -- does that impact? Or at least have the appearance of a conflict. ahem

So, should the author and the reviewer remain at a distance, one never acknowledging the work of the other?

How weird would that be? Mike reads Jenny's 483-page book, then writes a brilliant 2,376-word post about that book's genius, but Jenny can't be bothered to say "thanks" for what Mike wrote even though Mike spent all that time and effort praising what Jenny had written? Damn you, Jenny. You suck.

But, then there's what Sean Chercover said about a "thank you" being misconstrued as an attempt to influence the reviewer.

As BookRiot's own Rebecca Schinsky pointed out, that might be a problem with the reviewer. 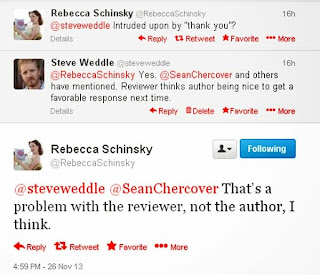 We started a nice conversation on Facebook about this. Here.

Also, what constitutes an appropriate "thanks"?

Does saying "Thanks" and RTing the review on Twitter carry as much weight as a personal email to the reviewer? Or should you mention the review on your own blog and send people to the reviewer's blog? Or should you comment on that reviewer's blog with a simple "thank you," since comments are currency? I mean, there's nothing worse (except war and famine and stuff) than spending 4,000 words reviewing a book and an author, only to have zero comments on your post five days later.  :(

Is a personal email invasive? Is a public comment just another #humblebrag?

"Thanks a bunch to @Ed69 for this five-star review of my Edgar-nominated novel STANDARD MYSTERY, now available at amzn.co/37362."

And what about just using the review without ever acknowledging the reviewer at all? I don't know of any decent writer who would argue the merits of that.

So, I ask you, what's the right response?

Let's assume we want to thank the reviewer.

Publicly? RT or FB Share with a "thank you" attached?

On the reviewer's blog?

On your blog?
Posted by Steve Weddle at 3:00 AM

I think a simple retweet or repost on Facebook without a comment is not a Thank You because it benefits the author as much as the reviewer by spreading the word about the book. (Not that I don't appreciate that it got noticed and acknowledge it directs traffic to my site, too). I think a Twitter direct message, email, and/or comment on the review is best. And if the author really liked the review, perhaps following the reviewer's site or Twitter.

Over thinking? Maybe, I do have a tendency to do that!

It's cool when authors thank me, but no problemo if they don't. Honestly I never thought about it before this debate!

If I know the reviewer personally, I may send a personal note via email or Facebook. I was never influenced by thanks yous as a reviewer, and I have no intent to influence future reviews, so my conscience is clear. If the reviewer misinterprets the gesture, so it goes.

If someone reviews the book in a blog, I'll drop an appreciative comment, on the premise they have gone out of their way to acknowledge the book; I can at least acknowledge that. Also, it makes me available for any discussion other commenters may wish to have.

I post links to public reviews on Facebook, and on my blog, always giving credit or a link back to the source. No attempt to influence future reviews, but I do need to get the word out about my book. That part is a business.

Steve,
I've been on both sides of this one as reviewer and reviewed. As reviewer, if the author doesn't mention the review, I figure he's unaware. In some cases it's hard to find a person, such as an Amazon reviewer. If the author is aware of the review and says nothing, then I figure he's old fashioned. In short, authors can do no wrong.
Now, as an author, I've only been able to thank a handful of the people who have reviewed me. When I do, I just mention thanks for the kind words, it means a lot and really helps... that kind of thank you. I think if a reviewer has a problem with that, she or he should not venture into public. No one, no one gets to make comments in a vacuum. That isn't how communication works.
Great post, Steve. Lots of meat here.

If Stephen King or J.K. Rowling reviewed my book (don't laugh) would I say thank you. Damn right I would. What makes Joe Blow in the trenches any different? I sometimes don't always see it but when I do I say thank you in a private eMail, Direct Message, or in front of the whole world.

I'm not sure how best to respond to a book review, good or bad, because I've been warned not to react to any book review, again good or bad. I do acknowledge the review on FB and by proxy Twitter because of my linked accounts.

Yet I don't draw much other attention to the fact that I've reviewed another author's book. The reason for this is that whole spiel about Amazon deleting "peer reviews" in the past while. I try to play low key in that regard to give the review a better shot of surviving the Book Review Deletecalypse.