Recently I read a book called, 33 Revolution Per Minute: A History of Protest Songs by Dorian Lynsky which I think is excellent. There’s also a good blog for the book that gets updated quite a bit.

I picked up the book mostly for the late 60s and early 70s stuff, research for what looks like will be a series from me, the “Eddie Dougherty Mysteries,” that start with Black Rock set in 1970 and will continue till… well, I don’t know yet, but 33 Revolutions... continues right up to today.

I particularly liked the section on disco. I was one of those teenagers in the 70s who firmly believed that, “Disco sucks,” but that has become just one more thing on a very long list of things I was wrong about.

And thanks to my Rdio subscription I listened to most of the songs mentioned in the book while I was reading and while they aren’t all as fantastic as Nina Simone’s, “Mississippi Goddamn,” it turns out there are a lot of terrific protest songs.

Another surprise in the book, one that’s crime fiction related, was the rather off-hand mention of Gil Scott-Heron’s mystery novel, The Vulture. 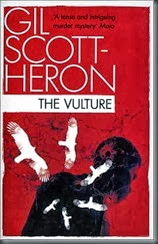 This is the cover of the version I got out of the Toronto Public library, reprinted in the UK in 1996 by Canongate. There doesn’t seem to be a recent American version but it is available on Kindle and also as a double e-book along with Scott-Heron’s other novel, The Nigger Factory.

First published in 1970, The Vulture is described as, “digging the rhythms of the street, where the biggest deal life has to offer is getting high, The Vulture is a hip and fast-moving thriller. It relates the strange story of the murder of a teenage boy called John Lee – telling it in the words of the four men who knew him when he was just another kid working after school, hanging out, waiting for something to happen.”

In a lot of the stuff I’m reading there’s an underlying current of how things are changing. Well, change is constant, of course, but the change in attitudes from, say, 1968 to 1972 is quite striking and The Vulture is on top of it. As one character notes, “It was a new day for John Lee. There had always been a smile on his lips and a chuckle rolling over his vocal chords, ready to be exposed with only the slightest provocation. The daytime was gone from his eyes. All that remained was the night.” Another way he puts it is, “He was the corner fashion post. The blue jeans and T-shirt were gone, but so was the sunshine.”

In retrospect an awful lot has been written about the transition from the peace and love 60s to the greed is good 80s but Gil Scott-Heron was writing about it as it happened. In songs, poems and novels.

The opening line to this is, “Standing in the ruins of another black man’s life,” and one of the comments on the YouTube page is, “Replace 'Black Mans Life' with 'Poor Mans Life' and it works even for us middle aged white men.....” Maybe one of the best YouTube comments of all time (though, really, I try to stay away from YouTube comments).

In the introduction Scott-Heron says he say the book as a movie and it’s really too bad that movie hasn’t been made. This novel is insightful and smart and a long way from blaxploitation.

Posted by John McFetridge at 12:45 AM