So Breaking Bad is over and done with and what are we supposed to do for entertainment now?

After a slew of recommendations on Twitter I gave Love/Hate a go. It's been hailed as Ireland's answer to The Wire, a plaudit which does get thrown around rather easily, and while it doesn't have quite the depth or ambition of David Simon's iconic show there is a hell of a lot to like about it. 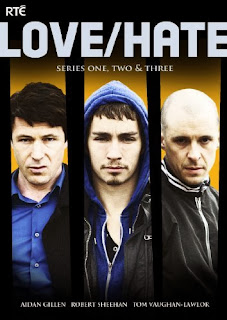 Darren returns to Dublin to celebrate his brother's birthday after a period lying low in Spain, hiding from firearms charges, but the party is derailed by his brother's murder. Out for revenge Darren is drawn into the orbit of his former boss, drug smuggling kingpin John Boy, a snarling, psychopath surrounded by a coterie of yes-men who are only ever a wrong look or an extra line away from violence. Darren might be useful to him though; he's smart as well as vicious, and brains are in short supply in the business. Darren might also be the man to take him down though, if he continues to believe John Boy is responsible for his brother's death.

Do I really need another gangster show boxset, I hear you ask. Why not just rewatch The Sopranos?

Well, Love/Hate is actually grittier I'd say, more akin to Showtime's Brotherhood - another series worth watching if you've missed it - a full speed pelt through post-boom Dublin's underbelly, touching on drug smuggling, prostitution and arms dealing, with the IRA making an appearance in later series.

It boasts some outstanding performances, including The Wire's Aidan Gillen and Misfits' Robert Sheehan - who's probably a bit too pretty for the role - as well as a great supporting cast who actually look like street level dealers and muscle and bring a tonne of swagger to the screen.

The storylines might lack an overarching narrative but in place of grand schemes you have a more authentic sense of the chaos around criminality, the sudden flare ups and incompetence, politiking and self destruction which tend to dominate a world populated by psychos and thugs who have no fear of the police and massively out of control egos.

But the real joy of the show for me is the script. Brutal when it needs to be, clever and dark, with a twisted sense of humour. It goes from laugh out loud funny to absolutely chilling in the blink of an eye and there's been nary a bum note in the three series I've watched. The writer Stuart Carolan is pure class.

One word of warning, after hitting the boxset you will almost definitely develop an Irish accent.

Seasons 1-3 are available on DVD and should keep you going for a few days at least.