I’m Trying Not to Scare You. Really.

I love bugs. Anyone who knows me knows this. And it’s funny, really, because I grew up scared shitless of anything with more than four legs or fewer than two (and quite a few in between, but that’s a different story altogether). Hell, in the summer of 1987 my little neighborhood was plagued by a massive cicada invasion; I didn’t leave the house until autumn. But something happened along the way, some switch was flicked, and over a short period of time revulsion gave way to fascination, and fascination gave way to outright adoration. There are few creatures on this planet I love more than spiders, and when I find one in the house I usually only pause to get a better look and say hello. I reckon if they’re in here, there must be something good to eat. Bon appétit, little buddy.

The same is true with me and horror—couldn’t stand the stuff as a kid. The ghost librarian in Ghostbusters scarred me psychologically. A poster for Creepshow haunted me for months. But I grew up to become a bona fide horror fanatic and, eventually, a sometime horror writer. And here’s where these two subjects collide: I have a loose rule about writing horror, which is to avoid—whenever possible—contributing to fears or phobias I find unnecessary or unhealthy. I mean, if you’re genuinely terrified that a werewolf is going to murder you then that’s your problem, hoss, but arthropods are a different thing. Though there are certainly some species one should be careful about, most folks’ manic terror of creepy-crawlies is just silly to me. That said, I decided pretty early on that I’d never write anything that made bugs the focus of fear in a horror tale. Which, generally speaking, meant I was never going to write about any of my segmented, leggy pals. 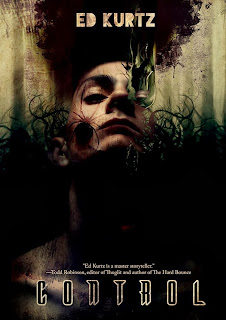 Then I read about ophiocordyceps unilateralis, the extraordinary—and damned creepy—fungus that infects certain species of ants and alters their behavior to suit the parasite. That’s real life horror right there, baby, and ideal for me since the bugs, in this circumstance, are the victims rather than the aggressors. From that point most of the core story in Control was formed almost instantly: a heretofore unknown strand of the fungus making its way Stateside through illegal means, and this one infects human beings, too. It gave me the opportunity to explore the limits of control in a given human life, as well as one my favorite themes in fiction, the circumstances that turn erstwhile normal people into monsters. And yes, there are bugs. Spiders, scorpions, ants, and others—the protagonist’s specimens, his only friends, which are at every bit as much risk as anyone else in the book. And wouldn’t you know early readers were quick to tell me how much poor Leon’s bugs creeped them out? Ain’t that a kick in the teeth?

Well. Perhaps it is not the business of a horror writer to strive toward not giving readers the heebie-jeebies. And perhaps those lovely, totally innocent little insects and arachnids will make your skin crawl, too. I won’t judge—Scout’s honor. I still can’t climb a ladder without getting vertigo. I suppose we all have our phobias.

But yours is silly.

Oh, and by the way: if you review the new Nightscape Press ebook edition of Control on Amazon by October 12, you’ll be entered to win a copy of the out-of-print, limited edition hardcover from Thunderstorm Books. Just drop me a line on Twitter or Facebook and point me to the review.

We have a lot in common. One of the things that terrified me the most as a kid was the newspaper ad for Joan Crawford's last movie, TROG. I couldn't look at it for very long at a stretch. The difference between us, though, is that I enjoyed it. Heh-heh.

I have a hard time killing a spider. More than once I hand carry them outside and some of my family looks at me like I'm nuts. Now when I lived in Belize. Different story. Yeah, I tried to kill those mothers.