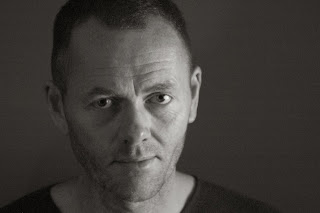 THE BEACH AT KNOKKE-HEIST

So I was living in Brussels and I met a girl in the Foreign Office, and for a while we were just friends, then one night we drove all the way to the beach at three in the morning, and shortly afterwards I nipped any When Harry Met Sally type situation in the bud by asking her to marry me, and she said, ‘Yes!’ but first she said, ‘I hate this place, I’m getting the fuck out of Dodge,’ and she said she wanted to go to Africa, and I said, ‘Too hot!’ how about Sweden or Switzerland, and then we ended up in Senegal.

There weren’t a lot of jobs going for non-French speakers, so I said, ‘I could become a writer,’ and she, obviously still in the first flush of romance, said, ‘Sure beans!’ so I started writing books. The first one was about a writer killing a prostitute in Manhattan, and was just as bad as it sounds, what with me knowing nothing about writing, murder, prostitution or Manhattan. Then I wrote one about a barber in Glasgow killing his work colleagues, then a school drama called The Tarantino Version, then a romcom, then a police procedural, then all those letters to publishers finally paid off and the barbershop book was picked up. I showed my new publishers the police procedural, and they said, ‘No thanks!’ having not read beyond the first few pages, and then I forgot about it – and all the other Early Crap – and instead wrote a follow-up, and another and another, to the barbershop story.

Then the internet was discovered, and everyone was getting a website, so I thought I’d better get one too, so I dusted off the old police procedural and put it on there as a Free Book to download, as if that was a thing – which it might have been if e-readers had been invented, but they hadn’t – but first I had to make it more comic, to tie in with the barbershop books. And some people read it, but not many. Then over the years it fell slowly into the shadows, like the Ring in Lord of the Rings, and I took it off the website.

One day, while living in Warsaw, I decided I could resurrect that old police procedural, so I got it out, dusted it off, I thought, We come at last to the great police procedural of our times, then I read the first few pages and said, ‘Oh, actually it’s really crap,’ and put it away again.

Much later Amazon Kindle started up in Britain, and I thought, well that old police procedural might be a load of old mince, but why don’t I just stick it on there and see if some sucker buys it. Some sucker did, but just the one.

Then I got an agent – Mr Allan Guthrie – and he said, what was the last thing you published, and I told him and he asked to read it, and I said, ‘No way!’ and he said, ‘Dang it, kid, let me see it!’ so I did, and he said, ‘This is one fuck of a novel!’ so I took it off Kindle, we changed the title to The Unburied Dead – even though there are no more unburied dead in this book than in any other – and he offered it to the great August Collective of London Crime Editors.

One of them said, ‘I love it!’ but can you make this change, and this change, and this change? I was happy to make those changes, as it was more or less reverting the book to how it had been back in the old pre-internet days, although that first draft no longer existed. Then, without actually reading the new draft, the editor who had requested the changes said, ‘You know, I don’t think we’ll be able to publish this anyway. But thanks for the three months of work.’

This is the kind of thing that happens to writers. This is why many writers can be found sitting in bars at 2am, hanging out with vodka and drinking loose women. On this occasion, I eschewed the vodka/women combination and gave the book back to Mr Guthrie, who had by this time started Blasted Heath.

Blasted Heath published the book, and it did so well that they now give it away for nothing, which is what I was doing twelve years ago. That there is what a cliché-meister would call full circle. Then two years ago I started writing the eighth novel in the barbershop series, but early on I had a moment of epiphany where I realised that hardly anyone alive today is reading the first seven, so there’s not really a lot of point in writing an eighth, so I took the macabre serial killer plot for that book, and put it into a follow up to The Unburied Dead.

This week the book is published. It’s called A PLAGUE OF CROWS, and it’s not free.

I think all that would still have happened even if we hadn’t driven to the beach at Knokke-Heist, but you never know, and I’m sure Mrs Lindsay would like it to be known that she has never – in all her life – actually uttered the phrase sure beans. 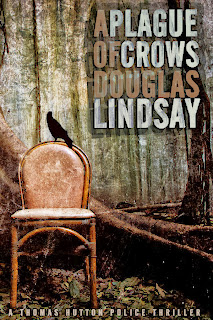 I absolutely love Douglas Lindsay's writing and think he's the funniest thing in crime fiction. You have to appreciate the British sense of black humor but if you do, you'll pee your pants laughing.
Anonymous-9
Disclaimer: I have not been asked for this review. I have not been paid for this review. I wouldn't know Douglas Lindsay if I fell over him. We have the same publisher: Blasted Heath.

Douglas Lindsay is witty,biting,satirical but above all fun.I have never met Mr.Lindsay whether in Scotland,Belgium or Senegal but I love his ability to tell stories with meaning and incite.Good luck on your latest.Best Alan Klaw New Mexico USA