A Recommendation for Halloween Reading 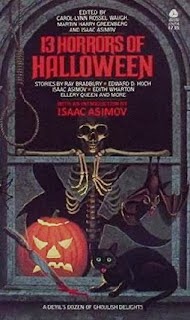 I have nothing of consequence to discuss writing-wise this week. It was just another week of writing everyday, piling on more words in my next project. It's a week before Halloween and it's always nice to read the spooky stories before All Hallow's Eve than after it. So, for y'all's consideration, a review I wrote back in 2008. Enjoy.


Halloween is perfect for anthologies. Even though you may have a month-long build up to the event, trick-or-treating really only lasts an hour or two. The short burst of a short story is enough of a treat to get in the spirit of the orange-and-black holiday without upsetting your stomach too much.

Over the years, I have searched out and found some Halloween-themed anthologies. Halloween Horrors, edited by Alan Ryan, focuses, as you can expect, on the supernatural and terrifying aspects of All Hallow’s Eve. Murder for Halloween is a nice collection of suspense stories edited by Michele Slung and Roland Hartman that runs the gamut from Edgar Allan Poe to Ed McBain. The last Halloween anthology I own, and the one I’m focusing this review on, is 13 Horrors of Halloween. Why, you may ask, does this collection get the prize? Simple. Isaac Asimov is one of the editors. Can’t go wrong there.

Besides, Asimov’s collection begins with, what else, an introduction detailing the history of Halloween as we now celebrate it. For a man as equally celebrated for his non-fiction output as well as his fiction, this was a nice addition to the usual diatribes about Halloween in other anthologies, including the aforementioned titles. I love history and how things and events have evolved over the centuries. Asimov runs the gamut, from biblical traditions to Persian mythology. It’s all quite fascinating. Asimov ends with this paragraph:

I love words and their meanings and I particularly enjoyed the word “effluvium” and how it associates with Halloween. A definition is “A usually invisible emanation or exhalation, as of vapor or gas.” I don’t know about y’all but Halloween, the day as well as the night itself always feels different somehow. Rarely here in Houston do we experience the cool winds (although we are today) but there is a certain spirit that permeates October 31. Even the date itself looks and feels different. The stories in this collection exude that same, certain, unique spirit no matter the genre of the story.

Ray Bradbury makes an appearance. Bradbury writes fiction that can be as nostalgic as old, sepia-tinted photographs even if you never lives in the world’s Bradbury describes. One of his favorite holidays is Halloween. But, unlike The Halloween Tree (which I’m reviewing Friday), “The October Game” is a fun little ditty with this first line: “He put the gun back in to the bureau drawer and shut the drawer.” It’s always fun when you start a story with a gun. It’s just waiting to be fired.

A few other mystery writers show up; Anthony Boucher, Ellery Queen, and a great story by the late Edward D. Hoch. I haven’t read many of his stories but this one, “Day of the Vampire,” is a good one for this election season. Sheriff Frank Creasley is running for reelection but a body is found and all the blood has been drained from it. After Creasley carelessly get the ME to hide the evidence, the sheriff’s opponent makes political hay from the cover-up. Unless you are a jaded reader, you won’t see the ending coming.

A few other folks you’ve probably heard of take a turn at a Halloween tale: Edith Wharton, Robert Grant, Talmage Powell. Al Sarrantonio’s “Pumpkinhead” is a devilishly good example of how an author can take something that can evoke fond memories in all of us—kids Halloween party, at a school and a home—and turn it upside down. The story takes place in two parts, one at school and one later that Halloween night. Here’s the opening paragraphs of the story:

A black and orange night.
Here came a black cat walking on two legs; there two percale sheet ghosts trailing paper bags with handles; here again a miniature man from outer space. The wind was up: leaves whipped along the serpentine sidewalk like racing cards. There was an apple-crisp smell in the air, an icicle-down-your-spine, here-comes-winter chill. Pumpkins everywhere, and a half harvest moon playing coyly with wisps of high shadowy cloud. A thousand dull yellow night-lights winked through the breezy trees on a thousand festooned porches. A constant ringing of doorbells, the wash of goblin traffic; they traveled in twos, threes, or fours, these monsters, held together by Halloween gravity. Groups passed other groups, just coming up, or coming down, stairs, made faces, and said, “Boo!” There were a million “Boo!” greetings this night.
I don’t know about you, but after reading lines like these, I want to travel back in time, don my Han Solo costume, and go trick-or-treating. But, since that isn’t an option, I’ll have to improvise. I think I might put in my vampire teeth and paint on the fake blood. I might sit by the front window, light a candle, and read Isaac Asimov’s 13 Horrors of Halloween by its light.

Oops! Gotta go. There’s the front door bell. I wonder what the kids would do if I said “Trick”? Let’s find out.
arker
Posted by Scott D. Parker at 1:00 AM

Thanks for such an informative post, I particularly liked the bit about 'effluvium', I'd never even heard that word before!