It's Supposed to be Fun

This week I'm getting ready to drive to Albany for Bouchercon. This will be my fourth convention and I've finally realized that the point is to have fun.

It was only after I got to the convention that I realized it's a vacation with hundreds of people who share many of my interests.

Oh sure, there are many really good panels where I learned (and continue to learn) a lot but also where I am entertained. It's fun.

And speaking of fun (which I think is important), here's a picture of my new computer: 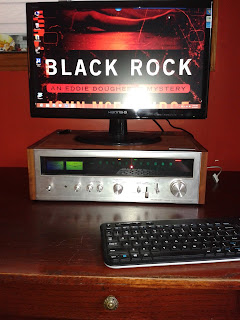 It's a Pioneer stereo receiver from 1973 (which I only dreamed about owning in the 70s).

I haven't had a new computer in over a decade and now that I have a tablet I figured I didn't need the portability of a laptop so I could get a desktop. But what kind? So I asked my most techie friend, Alison, what kind of desktop I should buy and she said, "The one I build for you."

And then she started talking about all the stuff* that goes inside and my eyes glazed over and I started thinking about the Buffalo Bills and if they made yet another mistake at head coach. Then Alison said, "What kind of fun case do you want?" Computer cases aren't fun, they're just functional. Or so I thought. It turns out this is just another example of how out of touch with the world I am.

For herself, Alison built a steampunk computer, which is fun, yes, but not really me.

But this one, which Alison named "Funk," is more like me. Maybe a more fun version of me.

So now it's back to packing. I'm on a panel Saturday morning moderated by the fantastic Barbara Fister (which is intimidating) and I'm also the panel-room assistant for three panels on Friday so if you see me, please say hi.

And if you're interested n a cool, custom-made computer let me know and I'll give you Alison's contact info. She can build it into pretty much any kind of fun case you like. I considered an antique lunchpail, a small suitcase that looked like Hemingway might have lugged around Europe and even a Commodore 64 case (the first computer I owned). Goodwill stores have some terrific stuff.

As long as it's fun.


* stuff is a technical term I don't really understand. It seems there are words and numbers and letters all strung together that apparently mean something to some people.

Posted by John McFetridge at 2:00 AM

That is one fun-looking computer case.
See you at the con!

Hey Thomas, are you still planning a trip to the brew pub/restaurant?

Man! That case is awesome. Love it. For a moment, before reading the piece, I thought you had your PC tied into the actual Pioneer receiver.