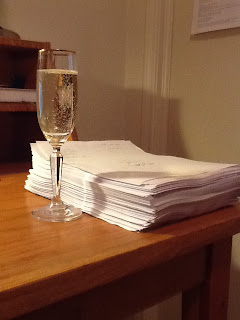 
For those of y’all following my progress this summer as I kickstart my writing back into gear, the last day of July 2013 brought not only the end of the month’s writing but also the completion of my second novel.


Yes! I reached THE END.


Here are the monthly stats for July 2013


As the years dragged on for me as I struggled with completing that sophomore book, I developed a saying: “It has taken me longer NOT to write the second book than it did to write the first.” [BTW, actual writing time for Book 1: 10 months.] Now, since the number of new words I wrote to finish the book (93,615) is basically novel-length, I’m adding a new sentence: “It actually took me LESS time to write my second novel than it did to write my first.” Since I first picked up the novel again on 9 June, I have wrote on it everyday (minus one) for 52 straight days. So, basically, I wrote a book in 52 days.


But something happened this summer. All that stuff from the past few years just sloughed off and, somewhere inside of me, I decided I wanted to finish the book. I set my mind to it, and did it. Timing is everything, and this summer there were two main things that influenced me from the outside. Coincidentally, they both came on the same day. Joelle’s 7 July post, “I am the world’s worst writer,” had a nice list of 5 things writers can use to get to THE END. Two of them really struck home with me at just the right time: #2 and #3. You can read them yourself, but they boil down to this: Don’t show anyone your pages until you have reached THE END; and, like a mantra, keep repeating “I will get to THE END.” It was a great boost. In the comments on that same post, Dana King wrote something so obvious that I never even thought of it: “Writers are often terrible judges of their own work, if only because they are the only person who knows what they wanted the book to be; everyone else takes the book at face value.” Boom! Daylight burst into my eyes and I saw the light. To Joelle and Dana, thanks for the boost.


Speaking of seeing the light, the talent I have is God-given, and I thank Him everyday for it.


So, I have reached the end of my second novel. It was a long time coming, but more the sweeter because of it. On Wednesday morning, I wrote the final two scenes, heart and stomach all a’flutter. It was fantastic. That night, my wife and I started a new celebration: we popped the cork on a bottle of champagne and toasted to the completed novel. There they are up in the picture.


Then, Thursday morning, I did the thing I need to do to prove that this second novel wasn’t a blessed fluke: I started my third.
Posted by Scott D. Parker at 1:00 AM

Congratulations. getting to the end of Draft 1 is the hard part. (At least it is for me.) Now you have all you need to shape it however you want it.

Congrats. I am so thrilled for you and honored that I was even a small part of the process. I envy you the revision process....it is the part where I always feel the joy in seeing a story turn into a real book. Congrats, my friend!

Dana: agreed on Draft One being the hardest. This one took me years to write (even though it only took me 52 days to write). My next goal for third book: write third book in same number of days. I want to reach 100 consecutive days of writing and then consider taking a break.

Joelle: Isn't that a good thing: that you helped but didn't even know it. Y'all both did. My only decision now is whether or not to read the 2nd book while I write the first. The neat thing for book three is that is the expanded version of a sub-plot for book two that I abandoned. I looked up on Thursday, realized I had about 20 scenes mapped out and said why not?