Celebrations in the Ossuary

David Cranmer on Celebrations in the Ossuary & Other Poems 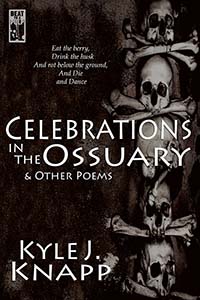 Many thanks to the Do Some Damage crew for allowing me to say a few words about Kyle J. Knapp's posthumous poetry collection, Celebrations in the Ossuary. Kyle was my nephew who died in a horrific house fire this past June. Our family can never fully recover, but through his words we may find a plateau where we can smile more than we grieve. What follows is my afterword to Celebrations:

Soon after Pluvial, Kyle began working on Celebrations in the Ossuary. He was so prolific—often writing a poem a day—that he had finished it on October 21, 2012, and at his untimely death on June 18, 2013, he had finished enough for a third book and part of a fourth.

Kyle and I had discussed the direction of his poetry following Pluvial’s release, and my only suggestion for him was to turn inward and address some of the themes of his life. I knew he had conquered drugs and was in an ongoing fight battling alcoholism. However, it wasn’t until after his passing that I started to analyze his work and realize to what extraordinary depth he had mined his soul to lay naked such raw-nerve pieces as “To Drink in the Early Hours” and “Edward and Dedalus.” He also warmly opens up his world to reverentially speak of friends he had said goodbye to in “The Greatest Loss” and “We Lived Alone,” and he continued to touch on the beauty surrounding him with “The Perfect Day.”

For Celebrations, I made only minor corrections to Kyle’s text. Though he always gave me full editorial control, I didn’t feel the need because these verses were resplendent. Kyle often sent a revision telling me to discard what came before, and, more often than not, the revision was from a perfectionist raising his own personal bar with some seemingly slight change. Not much has been altered from Kyle’s original work, aside from a few spelling and punctuation corrections and the omission of one word after discussing it with his mother. Celebrations is very much the book Kyle wanted published right down to the title, number of poems, artwork, and theme.

On a personal note, I miss Kyle dearly and long to banter with him about Charles Bukowski, Hunter S. Thompson, Vladimir Nabokov, or any number of other authors and books we had discovered and shared. The memories of moments spent in his home along Fall Creek discussing our mutual reading passions are what I’ll cherish most, and, I will do my best not to be sad when I recall these memories, because, as Kyle says in these very pages,

“Those days will come again,

They were eternal, after all …”
Posted by Steve Weddle at 3:00 AM

I'm very sorry for this loss to our poetical world. Looking forward to reading the collection.

Once again, big thanks to Steve and DSD for inviting me.