My book is not your map

I tend to worry about things quite a bit, for quite a while, until I just don't care anymore. I get tired of worrying about them, so I just let them go.

What's that thing in the front yard? Is it a body? Should I go check? I really should. Days can pass like this. Eventually, I just get tired of thinking about it.

So it is with street names.

When I was writing COUNTRY HARDBALL, I'd try to keep going when the Doubt Dingo would start circling, asking whether I had the place right, the name right, the street right. The DD would tell me to stop and look it up. I'd need to get the name of the street correct. I couldn't say Highway 58 if it was really Highway 85, after all.

People would read this and tell me I was wrong. People would post on Amazon how I'd gotten the name of a restaurant wrong, the mascot for a team wrong. The Doubt Dingo continued to circle, barking at me to stop, to research while I was writing. Man, I hate that damn dog.

Most of the time, I'd just power through and figure I'd come back and track down the pesky bits later. And I would.

In re-reading the manuscript for the 37th time recently, I was again visited by the Dingo of Doubt. Science would suggest that substantial amounts of alcohol would be enough to drown him, but I haven't found the right balance. Or my own after enough of it.

Anyhoo, I realized that if you're using my book to drive through the backwoods of Arkansas, then you're probably a complete dumbass I don't need to worry about.

My novel isn't a damn Rand McNally Road Atlas. It isn't a wikipedia article on handguns.

Did I work on getting all the details right? You're damn right I did. And the folks who worked through each and every page over and over checked things, too. I got notes and questions back. And we fixed all kinds of things I'd screwed up. So, the roads are right, but that's what makes a good story, is it?

But my stories aren't about a building, they're not about a road. They're about the people in those buildings, the people who walk those roads when the sun starts to come up so that they can stand all day behind a damn cash register until it's time to come home at sundown and spend the night trying to figure out which three of the eleven bills they can pay that week. And it's about the other guy from another road who knocks on the door at midnight, saying he's got a $500 job if you don't mind getting your hands a little dirty. 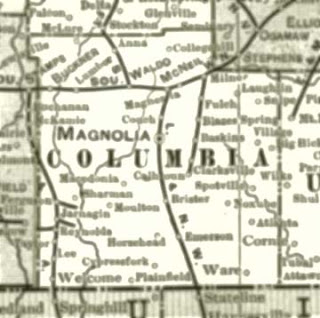 In writing, sometimes I get caught up worrying that I've got the right gravel in the right place. Was that road paved a few years back? I need to check Google Street View.

I don't write for cartographers.

If you're reading my book thinking it will help you get to Miller's Laundromat, then you're looking for a journey I can't give you.

I have to work through the damned dingo barking at me, telling me to stop my momentum, get and and make sure I'm writing about the right highway.

I don't write for dingoes. Bunch of illiterate baby-eaters, anyway.
Posted by Steve Weddle at 7:37 AM

I feel your pain, or, rather, I understand where you're coming from. In writing my current book set here in Houston, I strive to get things correct in terms of geography, but, every now and then, I just need a building to be next to another building so I can have a shoot-out. So I just move it. Houston readers will recognize some of the landmarks while others will start a list of "Things Scott Got Wrong About Houston." Whatever. I'm with you. The story is much more about the people and not the landmarks.

I ultimately went the Falkner/TN Williams route and made a whole fake county (Culloden) so I could tell the story I wanted without everyone crying foul about how "nuh-uh, that's not a real place" or "That's not how that happened" etc. etc.

So, if you can find me Yocknapatawpha & Two River counties on a Mississippi map, well, Culloden is somewhere south of those.

Ricky B,
Yeah. Changing all the names makes sense.

Scott, Happened when we'd watch Hawaii five-0. Lived there few years and my folks would point out geographic goofs. They didn't care. Just thought it was funny.

Jason, that faulkner dude mighta been onto something

That damn dingo must have been in a large litter. I have one of his siblings circling me. I worry about which way a building faces so I know if the sunrise will shine on it, and does southern Utah have a rainy season.

I have a number of rules. One is this: use accurate locations if scene is positive. If negative make one up. Keeps me from being sued, or not.

Not matter what, you can't please all readers. Some live to be overly critical. But there is good news. They bought the book.

You never know what people will complain about. Ed McBain created his own city an caught grief because some locations weren't consistent with something he used ten years ago. My solution was to take three connected small towns and make them one, giving them a new name. All the streets are real, as are most of the locations. This saves me having to make up a lot of street names i don't care about, and lets Google Maps keep them straight for me.