There was even a famous book written about the situation called, “Two Solitudes.” 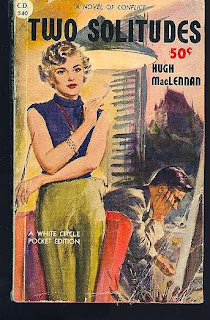 The first line of the book is, “Northwest of Montreal, through a valley always in sight of the low mountains of the Laurentian Shield, the Ottawa River flows out of Protestant Ontario into Catholic Quebec,” so there’s some trouble right there as Ontario wasn’t entirely Protestant and Quebec wasn’t entirely Catholic, but, well, writers, you know...


Then, like everywhere else, the 60s hit and social change was in the air. In 1972 a new political party determined to make Quebec its own country (or, at least, to change the federal arrangement – I guess you could call it Canada’s, “states’ rights” movement)  received almost 30% of the  popular vote.


Panic set in. Well, okay, not really panic but a lot of people – English people – started to realize that maybe the way things were wasn’t great for everyone and change was coming. People started asking, what can we do to make this better?


The most obvious thing for a place where 80% of the population spoke French was for the other 20% to learn the language. And it was decided for us kids the best way to do that was through immersion programs. So, I started high school in French immersion.


For my generation the success rate wasn’t great but it would be very difficult today to find someone under thirty in Quebec who can’t speak French.


So, forty years later I finally figure out out – immersion works.


But at the time I resisted the idea and never really learned French well enough to be comfortable with it. I regret that and I’m working on it now.


And with my writing I resisted the idea of immersion for a long time, too. I’d get an idea and I’d follow it for a while and then like Eric said here yesterday, I’d realize it didn’t work and I’d put it down and start something else (Joelle addressed this quite well in the comments, I think).


Then sometimes I’d go back to that first idea and work on it some more. Sometimes I would have three or four things going at once. And that might work for some writers but it doesn’t work for me.


Now when I think I have an idea for a novel one of the first questions I ask myself is if it’s something I could spend the next two years thinking about every day. Could I read dozens of books and articles on that subject? Do I really have anything to say about it? Is it worth saying?


Could I really immerse myself in that subject for years?


When I finished writing Black Rock (looks like the pub date is set, May 1st, 2014) I looked for another story that could follow it, something else set in the early 70s in Montreal. For most of us Canadians the biggest thing that happened in 1972 was the Canada-Russia hockey series. A big deal at the height of the Cold War, no doubt, but it didn’t seem like enough for a couple of years immersion. When I started to look into it more I discovered that the day before the first game in that series there was a nightclub fire in Montreal and 37 people were killed – and three men arrested for the arson. And then the night after the game the Montreal Museum of Fine Arts was robbed of two million dollars worth of paintings (that have never been recovered).


So now it’s starting to look a little like a book but what’s at the heart of it? 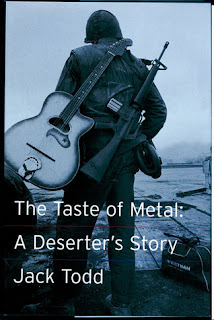 As I continued to research I started to come across articles about war resistors who had moved to Canada – draft dodgers. There are no accurate numbers but estimates run at over 500,000 – one of the biggest migrations of people in North America and probably the biggest for political reasons.


And still very contentious. Everyone seems to have an opinion about draft dodgers.


So now it feels like something I can immerse myself in for as long as it takes to write a book. I’m a little surprised that there hasn’t been more written about this movement. 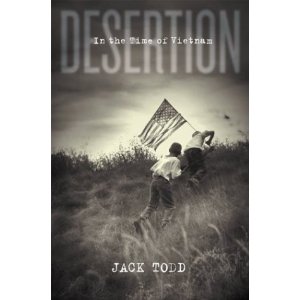 One book that is definitely worth reading is a memoir by Montreal Gazette columnist, Jack Todd. It was published in Canada with the title, The Taste of Metal, and in the US with the title, Desertion: In the Time of Vietnam.


Posted by John McFetridge at 2:00 AM

I've always been pretty good about immersing myself in the project at hand, but I can;t keep it up for more than a year or year-and-a-half at a time. After that, I'm almost always sick of the whole things and can't wait to type THE END at the bottom. (I never type THE EN until I'm finished with what I intend to be the final draft.)