Last week, I listened to a debate about public shaming.  It's been a hot topic, particularly in the wake of the story about the woman who posted pictures of an alleged cheating spouse on Facebook, after listening to his conversation while on a train.

Yesterday, I found myself resisting the urge to snap a photo and post it myself.  I didn't do it... but I was tempted. 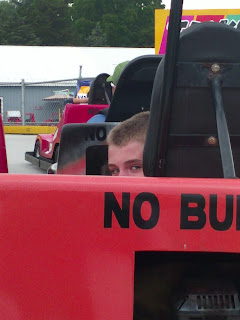 We'd gone go karting for Father's Day.  It was my first time go karting, and it was also a first for both of the kids.  We were in line for one of the tracks, and the guy took Bry's ticket (we had multiple ride bands, so this means he broke it off her band) and she was off to a kart.

Then he told us there was only room for two more.  I stepped aside to let Brian go, which gave me a chance to snap a few photos of everyone in action. 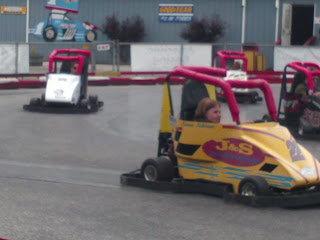 It also gave me a clear view of two guys who were out on the track.  Although the rules are clearly posted - no bumping or being unsafe - you can expect that you'll make contact at times, even without intending to.

These two guys, however, fully intended to make contact.  They were cutting each other off to run each other into the boards.  In fact, they smashed so bad that part of the engine broke off one of their karts and wires were dangling from the kart and the entire run was stopped and everyone else had to sit on the track while this kart was pulled to the side and they fixed it.

Although it was posted that breaking rules and unsafe behavior could result in being removed without a refund, it didn't even look like anything was said to these guys.  When the race resumed, so did their reckless driving.

All I could think was that my husband was out there.  Our kids were out there.  I was furious.

And I was tempted, but then I thought about the debate from last week, about public shaming.  I wasn't worried about context: I'd witnessed what they'd done first-hand.  I could have videoed it.

I realized that I wasn't only angry with the losers on the track.  I was angry with the go karting place.  Why post rules you won't enforce?  I mean, it wasn't just that they were breaking the rules... it was that they also crashed a vehicle hard enough to break part of it off.  You would think the staff would have pulled them from the ride.

Instead, we spent the rest of our rides making sure we weren't in the same line with the losers.

Now, for businesses, there is a way to publicly shame them.  Twitter and Facebook are options, as are online reviews.  Is it fair that the business should take the brunt alone?

In a way, it is.  After all, we're riding at our own risk... but if the company isn't enforcing their own safety policy, I think their disclaimer wouldn't be worth the price of the signs it was posted on.

At the end of the day, we all had fun.  We came home safely.  There was one bad ride.  (I'd knock it two points straight off for letting people smoke in there, and the service wasn't good.  Our three-scoop cones were the size of a one scoop anywhere else - and I used to work in an ice cream shop, so I know... and the scooper touched the ice cream with her hands while scooping.)  Did I have a good time?  Yes.  Would I go back?  I'd want to check out another venue instead.

And what would publicly shaming the two losers have done to affect my day or my next experience?

I guess I'm not quite like the woman who made her kids wear signs in public about their behavior.

But as an author, I'm familiar with the temptation to get revenge in writing.  I know a lot of authors who like to kill off people they don't like, who've hurt them.  I don't do that.  I make them the villains, because people feel sympathy for victims, and I don't want readers to have any sympathy for the people I'm taking my private revenge on.

And I'm not quite like Taylor Swift, loving, leaving and dishing the details in my next break-up song.

Will the two losers ever feature in one of my books?  Possibly.  If they do, my husband and I will be the only ones who'll know who I'm referring to.  I don't know their names, and I don't know anything else about them, so it's not quite like shaming.

That's what I tell myself, anyway.  What about you?  How do you feel about public shaming?  Or getting revenge in writing?  Ever been tempted yourself, or taken it to the next level and done it?

I recently help my father drive he and my mother from my brother's house in Colorado to their home in Pennsylvania. We got a flat tire in eastern Kansas and pulled into what appeared to be an abandoned diner's lot to change the tire. Someone lived in the nasty trailer next door and gave us three kinds of hell about trespassing and to get the hell out. I already have the story outlined in my head, along with what's going to happen to the criminal activity he was so worried about. The only question left is how precisely to define the location.