J David Osborne (By the Time We Leave Here, We'll Be Friends; Low Down Death Right Easy -- both recommended) is kicking off a new online serial novel, God$ Fare No Better. Given how much the Spinetingler crew loved Low Down Death Right Easy (Nerd, myself, and Nik Korpon have all signed off on it) it only seemed right to invite him to DSD today to talk about his new one.

It's also worth pointing out that J David Osborne is starting a new publishing company, Broken River Books, with a focus on  literary crime and neo-noir fiction that will start publishing books in 2014. 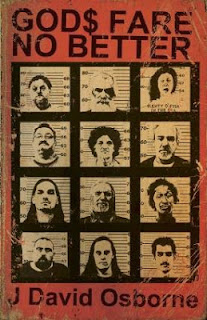 Eating Adderall makes you grind your jaw a lot but it's a small price to pay for actually getting shit done.

I'm not prolific. I've been writing seriously for about seven years and I don't have a whole lot to show for it: a few short stories here and there and a couple books that are together shorter than your average novel. Sitting down and putting words on a page is tough because I just want to get to the point, I want to tell you what's what and have us both chill inside that idea for awhile. And that's become my "style": minimalism in the extreme. Fill in all that blank space yourself.

My shortcomings have forced me to get better at picking the right words. The novel-writing process is a culling thing, where we start with a handful and begin to cut the fingers off at the knuckle. Oh, the stories stumps can tell.

Do any one thing for too long and you'll start to resent it. Life is so big and heavy and there's so much to do. Why am I sitting here? Adderall always tastes sweet to me. I don't know if it really is, though.

I've become obsessed with the serial form. This seems like a cake-and-eat-it too thing. You're telling me I can write a story a piece at a time? Three thousand words and then on to the next thing? Do that over forty weeks and you have something larger than you've ever done, something more detailed and loving, and you did it by tricking yourself into taking it one step at a time. I'm so, so in.

Television stories are superior to film because they force you to let everything sink in over a week's time. So instead of this, this, this, and oh god who cares, it's this…pause. Walk your dog. Go to work. Mull it over. We are the ellipses generation, and we like to ponder things while we're doing something else.

I break up everything I do into little jokes. There's a set up and a punchline. And within that joke you can let the details slip, the things that make the characters real. Here's the joke I'm currently crafting: GOD$ FARE NO BETTER, a big, sprawling crime drama for which I actually, for the first time, wrote an outline. Within that, though, each week I get to play with the little moments that are just there to be fun and maybe illuminating.

I'm very excited. It's a noir story at its heart, full of all the typical moral dilemmas and violence. There's a supercop who has to deal with the grind that follows his big moment: think John McClane, if after the high-rise he had to return to a normal life. There's his son, who sells drugs that he purchases online. Then there's the rogues gallery of bad men who are learning to adapt to the constant state of rapid growth, to find new ways of being bad. The stories will bump against each other, sometimes roughly. At least that's the plan.

Plans can be kind of stuffy though, and so GOD$ is also a weekly exercise in taking this big bitch wherever the fuck I want, outlines be damned. There's a hitman that can unhinge his jaw like a snake. Where did that come from? I don't know, but it's there now. It's only going to get weirder. Let's see what can be done.

Posted by Brian Lindenmuth at 4:00 AM

I've always thought about doing a serial novel. But I figure I should try and find an idea that I could realistically like enough to write out weekly for like a year. I'm glad you found one that sticks.