From Online to On-the-Shelf

This week, I'm packing and shipping 100 ARCs of HARD BITE to independent book stores across the country. (Just to bring you up to speed, first it was published via Amazon e-book by Blasted Heath, and then picked up for a print deal by New Pulp Press.) The giveaway was my idea, and the print publisher agreed to give me a break by sharing expenses. It's expensive no matter how you look at it. Each ARC is about $4 (at cost). Shipping via media mail is another $2.50 give or take. There's no guarantee that I'll make my money back so why do it? Because I'm not just trying to sell my book, I'm establishing a writing career, and a series under the Anonymous-9 brand. The book isn't going randomly to 100 people. It's going to independent mystery bookstore owners/managers who have loyal customers and lots of avenues available to support authors they like. Likewise, New Pulp Press has been in business for ten years and going strong. The company wants to put itself in front of those people too. Neither of us are in this for a one-shot deal. We're in for the long haul. 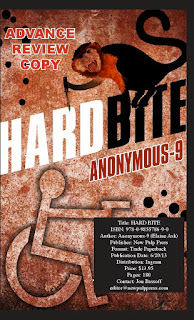 So this week I stuffed envelopes and cut hundreds of pieces of tape and lugged totes full of books to the post office where each parcel was weighed and labeled by hand. It's arduous, tedious work but in my mind worth it. My ARC will likely get handed to someone at each store and put in their TBR pile.  Do I know this for sure? I don't. But feedback shows people who have the book and see the cover, open it and read the first page.  Read the first page and I gotcha! New Pulp Press has done a stupendous job of putting info especially for store buyers right on the cover—who to contact, where to order (Ingram the distributor), the ISBN etc. Nobody has to turn the book over or hunt for info to place an order.

Even if most storeowners don't order HARD BITE this time, it gets my name in front of them. Advertisers say that people usually have to see something at least three times before they make a buying decision. So it's just another "persuader" after the reviews come out in June from "big guys" like Publishers Weekly (God willing), ForeWord (for sure), Booklist and others.

I'm learning this stuff from the ground up by partnering with small publishers.  I get included in decisions large and small regarding design, marketing and publicity. My input is actively sought and you better believe I've got opinions and ideas!

I'm also not afraid to invest my own money to support them, backing ideas that may or may not work according to plan. Blasted Heath and I had a few small "busts" with advertising but we also had some big wins that put Hard Bite on the Amazon Top 10 list twice in Hardboiled Mysteries, Paid and hitting #90 in the more competitive Thrillers, Paid. If I were with a Big 6 publisher I'd rarely or never be included in marketing or publicity meetings.

When I do get picked up by a Big Six-er  for a print deal (you'll notice I say when and not if 'cause it's positive thinking) I'll come to the negotiation with ideas about how I want to be marketed and publicized, and it'll be written upfront into the deal. There's no way I'd know how to navigate these waters without spending time in the trenches with small publishers first. Or maybe Blasted Heath and New Pulp Press will grow bigger and stronger along with me and I'll never have to go anywhere else. In today's publishing it's all possible, there are lots of different ways a novel-writing career can prosper, and where there's a will there's a way.

Email ThisBlogThis!Share to TwitterShare to FacebookShare to Pinterest
Labels: Anonymous-9

"Or maybe Blasted Heath and New Pulp Press will grow bigger and stronger along with me and I'll never have to go anywhere else."

That would be great. Good luck.

THAT accounts for the radio silence!

Thanks John! Great to hear from you.
A-9

Good luck on your journey.