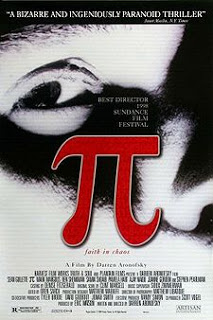 Let's get one thing straight: Pi (1998) is one weird-ass mind trip of a film and it's not for everyone. However, it's one of my favorite indie movie and a dang good thriller.

And Chevy Chase can rest easy: there's really not a lot of math in this movie.

Max Cohen is a reclusive, paranoid math genius cursed with headaches who knows--just friggin' knows!--that there are patterns in nature that follow certain mathematical precepts. Here are his assumptions: 1. Mathematics is the language of nature. 2. Everything around us can be represented and understood through numbers. 3. If you graph these numbers, patterns emerge. Therefore: There are patterns everywhere in nature.

The thing he's trying to solve is the stock market. He's doing this for the joy of discovery, not for monetary rewards, as he yells at another character later in the film. To help him analyze patterns, Max has built a gigantic supercomputer, named Euclid, in his New York apartment. After a particularly trying day, Euclid crashes but not before spitting out a 216-character number and a single stock pick. Pissed off because the stock pick just can't be correct, Max throws away the printout of the number. Later, he meets with his former teacher and mentions the 216-digit number. The teacher, Sol, gets immediately interested. Max then learns that the stock pick Euclid predicted was accurate...but he can't find the printout.

Soon, he meets a Hasidic Jew, Lenny, who also is into number theory as it pertains to the Torah (remember the Bible Code from the 1990s? Same thing. Basically, every letter in Hebrew corresponds to a number. Thus, the Torah is both a written document and a large series of numbers from which patterns can emerge.) He wants Max's help and he agrees. Add into the mix some shady types (who may or may not be criminal or governmental) and Max is seeing spies everywhere he looks. In order to rebuild Euclid, Max takes from the shady types a new super microprocessor. He turns on the computer and starts analyzing the Torah. Again, Euclid crashes and again it produces a 216-digit number. Since the computer won't let him print, Max starts writing down the number...and finds a pattern.

Here's the key: according to tradition, the true name of God is a 216-letter word. Max's teacher, Sol, thinks that Euclid became sentient and, in that moment, the computer saw the Almighty. Lenny's Hasidic group wants the number because they want to reverse the code and find the true name of God. The shady types want Max to help them do evil things. Max just wants to be left alone.

Filmed in black and white, this is Darren Aronofsky's first film. Most of the tropes and film techniques he uses in subsequent films (Requiem for a Dream, The Fountain, The Wrestler) are evident here. To be honest, the black and white noir touches make this film. The paranoia Max experiences is heightened by the shadows and the fear of what truly lies in the darkness. It's brilliant. And there are some genuinely weird moments in this film (a brain in a subway that seems to be connected to Max’s psychosis) that would make Salvador Dali proud. Another noir trait is Max's self destruction as he spirals downward into madness. I make it sound light--it really isn't--but in this film, I love it. The electronica score by Clint Mansell (in addition to songs by Orbital, Aphex Twin, Massive Attack, and others) adds to the weirdness. Coming out a year before the Matrix soundtrack, this was a major entry point for me to electronica and I've followed some of the artists in the years since. Opposite of the Pi music, Mansell, in his soundtrack for the 2009 film, Moon, captured the loneliness and isolation of the lunar surface using only a piano.

I originally saw this film when I was dating my wife. She hated the film at the time and has successfully resisted every time I've watched the DVD (yeah, I bought it and have watched the DVD about five times since). I think what really strikes home with me is the nature of God as portrayed in the movie and how we humans can get but a glimpse of the beauty and order of the universe (and God?) via mathematics. It's an awe-inspiring concept and is the touchstone for this great film.

Here's the trailer.
Here's the official site (oddly still active 14 years after the movie's release)
Posted by Scott D. Parker at 1:00 AM