Pleased to bring back one of our most frequent guests, Hilary Davidson, who has the world's largest Pinterest page.

This week, she stops by to talk about her new Lily Moore novel, EVIL IN ALL ITS DISGUISES.

"Davidson knows how to write a galloping page-turner,
and the plot twists are plentiful."—Quill & Quire

In this third Lily Moore book, the setting is a hotel in Acapulco, where guests check out, but can never leave, as the song says.

We first met Lily in THE DAMAGE DONE and saw her later in THE NEXT ONE TO FALL. Now she's back.

DSD: This series is known for the exotic locales, the fashion, and the movie-buff fun. What are the blessings and curses that come along with this? Do you find yourself reaching readers who might not otherwise pick up detective fiction?

Hilary Davidson: The exotic locations have certainly lured in a lot of people who claim they don’t normally read mysteries, and the Peruvian tourism board has bought boxes of my second book, The Next One to Fall, to give away at trade shows. I was worried they’d hate me for killing a tourist at Machu Picchu, but it turned out they didn’t really mind. (I don’t think the Mexican tourism board will take to Evil in All Its Disguises the same way, though. There’s too much real-life Acapulco crime that ended up in that book.) My love of old movies and vintage clothes is something I got from my grandmother, so it thrills me when readers connect with that. The downside has been that a few people think exotic locales + fashion + old movies = cozy, old-fashioned mysteries. The books are tough to pigeonhole, but they tend to be dark, so I’ve heard from a few disgruntled cozy fans.

DSD: How have the characters changed, especially Lily? 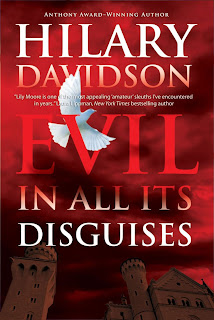 Hilary Davidson: Lily Moore has been evolving through the three books, and she’s become a tougher, resilient character. Before The Damage Done, she tended to run away from her family and relationship problems, rather than confront them. But her life changed dramatically in the course of that book, and that forced her to change. In The Next One to Fall, she was dealing with grief and struggling to pick up the pieces of her world after everything fell apart. In Evil in All Its Disguises, she’s recovered from some of those wounds, but she has a lot of baggage from the past that she’s dragging around with her, and she starts to understand that unless she confronts it, she’ll always be chained to it.

DSD: How difficult is it writing an amateur sleuth? Don’t you sometimes wish Lily could get a search warrant?

Hilary Davidson: Definitely! That was one of the great things about writing Evil in All Its Disguises. On the one hand, Lily is trapped at an Acapulco hotel that has armed guards who won’t let anyone leave the grounds. But being trapped means all bets are off inside the hotel, so Lily isn’t worried that they’re going to call the cops on her for breaking into someone’s room. Lily’s got a “bad girl” side, and that really came out in the latest book.

Hilary Davidson: I love Twitter, but I don’t think it can replace a book tour. It’s wonderful for meeting people and getting into interesting, sometimes crazy, conversations. I treat it like my virtual watercooler because I work in a corner of my living room, and I have no coworkers unless you count the incredibly squawky blue jays in the courtyard behind my building. But would be a mistake to think that most of the people who follow me on Twitter are into my work. Some people are just there for recommendations of gluten-free restaurants or for the llama photos, which is fine with me. A lot of people are on Twitter just to promote their own work, and they don’t care what I’m doing — they’re only following me in the hope that I’ll follow them back so they can sell me their stuff.
I’m a big believer in book tours, even though I know a lot of writers who disagree with me on this front. I don’t believe touring is for everyone. For starters, are you the kind of person who will turn into a resentful rageball if you see there are only five people in the audience? Don’t go on tour. Touring gives you the chance to hang out with booksellers and librarians, and to meet up with bloggers and other authors. Generally speaking, local media won’t cover your book unless you’re visiting the area on tour. I think there are a lot of ways to connect with readers — Alafair Burke’s video chats come to mind as an excellent idea I want to steal next time around — but there’s nothing better than meeting in person.

DSD: What’s the biggest mistake you made as a debut author? Or what’s one thing you’d change if you could “debut” all over again?

Hilary Davidson: I would take all of the ARCs I sent to media outlets and give them to booksellers and librarians instead. Because I’d worked in magazines for years, I was obsessed with media coverage, and I didn’t realize how much more important it is to get your book into the hands of book pushers.

DSD: Publishers Weekly mentioned the “Poe-like” creepiness in EVIL IN ALL ITS DISGUISES. Where’s the Poe in this one? Is there someone buried in one of the hotel rooms?

Hilary Davidson: Well, actually… no, wait, I shouldn’t be all spoilery. But there’s always some Poe in my books. In Evil, a lot of it is tied up in the Hotel Cerón itself. When I started writing it, “The Fall of the House of Usher” was on my mind, and I pictured the hotel crumbling from within, and its rottenness being a metaphor for the people running it. But as I got into writing the book, I realized that the story was really about revenge, and that almost every character wants vengeance on some level. That includes Lily, even though she denies it to herself. Revenge brought me back to another story by Poe, “The Cask of Amontillado,” and it worked its way into the book. Mind you, when that reviewer made the comparison to Poe, they might have just had the subterranean passageway filled with rats in mind. Or maybe the snakes? It’s hard to say.

DSD: Some readers have seemed torn whether to classify this newest Lily novel as a cozy because it has some stronger elements than the previous books. Is this a fair reading of the book? Does it matter?

Hilary Davidson: BookPeople’s Scott Montgomery has told me how hard my books are to categorize. From a marketing point of view, this is a bad thing, because it’s easier to sell a book you can put into an easy-to-recognize category. A lot of people who read the phrase “amateur female sleuth” expect a book to be cozy. I don’t really mind how the books are categorized, unless readers feel cheated or disappointed. I know a few cozy readers hated the dark ending of The Damage Done, and others who were disturbed by Lily’s suicidal thoughts in The Next One to Fall. I don’t have a sense yet about what they think of Evil. It’s by far the most romantic of the books, in spite of the rats and snakes and the creepy Poe-like atmosphere. Honest! (Hey, come back, cozy readers! Why are you running away???)

DSD: What's the one genre novel you'd love to write but probably won't?

Hilary Davidson: I’d love to write science fiction. One of my all-time favorite authors is Harlan Ellison, and I think I learned how to write a short story by reading his. I don’t really see it happening in the near future… but you never know.

And now for a little something for you. Caption this photo of Dan O'Shea and Hilary Davidson. The best caption wins a copy of EVIL IN ALL ITS DISGUISES. Post your captions -- and your whatevers -- in the comments. No wagering. 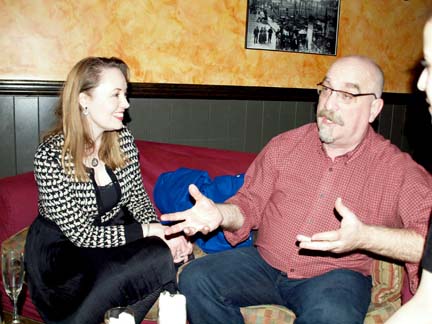 Sure Hilary, I'm bald and fat. But I can take Rogaine and loose weight and you'll still be...eh, gorgeous and successful.

"And then you stuff the capybara inside the llama, and they call it a turduckalamybara."

"I know I'm harping on this. But if I can't EAT the cake, then what's the point of HAVING it, Hilary? It, like, literally makes no sense whatsoever!"

So then the guy says, "What? You think I wished for a 12-inch pianist?"

Thought bubble, Hilary: "So this is evil in one of its disguises."