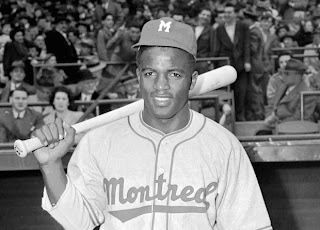 A new biopic about Jackie Robinson breaking the major leagues’ colour-line in 1947 opened last week and, as with Argo, there has been a lot of talk here about how the Canadian aspects of the story have been minimized.
Maybe they have been, maybe we Canadians overstate the effect of Montreal on Robinson’s 1946 season with the Royals, I’m not sure, but I am sure that we should stop whining about the way Hollywood cuts us out of their stories and start telling our own better.
There was a TV movie about the events in Argo made by Canadians that aired in 1981 called Escape from Iran: The Canadian Caper, but I don't remember there being much 'caper' in it. It was certainly a serviceable, straightforward movie. Maybe it stuck too closely to the real story. In its review, Variety said:
"... a detailed logistical account of the rescue may have been avoided because those events were in fact fairly mundane.
They resulted in an unsatisfying climax — the Americans simply answered a few questions at the airport and boarded their plane out of Iran.

Ordinariness of the conclusion was compounded by a series of quick cuts from scene to scene that robbed viewers of a well-defined struggle to the goal of freedom, and gave them only a few suspenseful snatches of that journey. ..."

Well, that does sound pretty Canadian, doesn't it.

When it comes to Jackie Robinson and the integration of baseball, though, it would be tough to give Robsinon's year with the Royals, "an unsatisfying climax." They won the Junior World Series in six games, three straight at home, against the Louisville Colonels. After winning the first game in Louisville the Royals lost the next two 3-0 and 15-6 and limped back to Montreal as underdogs. The comeback victory topped a season in which Robinson faced death threats, constant taunts, stayed at different hotels than the rest of the team, ate in different restaurants (or hotel kitchens) and... well, you know the drill. I haven't seen 42 but I imagine all that's in there when Robinson joins the Brooklyn Dodgers the next year.

But I still say if Canadians are unhappy that the support Robinson was given by the people of Montreal isn't in the movie, they should blame Canadian producers for not making their own movie.

I spent most of the 1990s trying to sell a script I wrote about Robinson's year with the Royals and never got any interest from Canadian producers. Of course, my script may have been terrible. Still, the real events in Montreal in 1946 should have been enough to at least get a nibble and then maybe a better writer to do a better draft - happens all the time in Hollywood. I finally managed to sell the story as a 60-minute CBC radio drama which I co-wrote with Michel Basilières.


In the meantime, I used Robinson and the Royals as a plot point in a short story I wrote a few years ago that was published online in Demolition Magazine. It’s called Barbotte and it's available for free here. 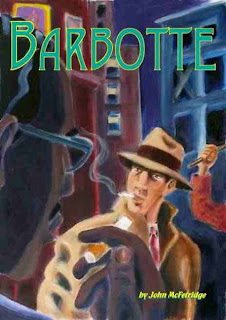 And one last thing. I’m very excited about the Spinetingler nomination for my novel, Tumblin’ Dice, a real surprise to me, so the publisher, ECW, has lowered the price of the ebook to $1.99 for April. The book got some good reviews when it was published but disappeared pretty quickly. And I noticed when I checked to see that the sale price was in effect that it has also received some very bad reviews, so be warned, it’s not for everybody. Another good reason for the free samples of ebooks.

Must be something in the air (maple syrup?), it's Canadian Day online today, here's Kevin Burton Smith's post on The Rap Sheet: