A couple weeks ago, the lovely and talented Jay Stringer cut through some nonsense to give out writing advice:
1) Sit your butt down and write, and
2) When you're done, just send the damn query. 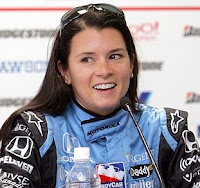 Jay Stringer is somewhat like Danica Patrick. Or Derek Jeter. Or whatever name will being the good SEO to this post.

See, Jay Stringer's agent is not only one of the best agents out there, but also one of the coolest human beings. (Full disclosure: She also reps some complete dorks, for some reason.)

Add to that the fact that Jay has a great Thomas & Mercer deal for his Eoin Miller books, in addition to numerous stories, including this thing right here.

Danica Patrick is slated for the pole position at Daytona this weekend.

Derek Jeter is coming off a goofy injury to captain the New York Yankees to another disappointing season.

And Jay Stringer is talking with his agent and his editor about all the new novels he's writing that folks will be lining up for.

If you're looking for writing advice and querying advice, you're probably not those people.

If you ask Jeter or Patrick or Stringer for advice, maybe they'll tell you that you just have to do your best work and take your shots. Wayne Gretzky, one of the top thousand hockey players of all time, said that you miss one hundred percent of the shots you don't take. All fine advice, in a sense. Just Do It. Right?

Well, how about an unqualified 'yes and no'?

When you have an agent, a book deal, a pole position, a World Series ring, you may not precisely and exactly recall what it was like when you didn't have those things. I'm not saying those folks haven't earned everything they've gotten. Hell no. I'm saying that they HAVE earned those things. They've worked their butts off. But sometimes there are very specific things a writer without an agent, a driver without a pole, a player without a win needs to know. Success is great, but can distance you somewhat from the time before.

A few weeks ago, I was sitting in a coffee shop, starting a story. I'm scribbling away in the notebook, meaning to write a certain type of story. At a table very near to me were two greasy hipsters, showing each other artsy mini-films on their $2,000 Apple laptops. Of course, I'm not judgmental or opinionated, but I could see how someone who had come to the coffee shop to write might have begun contemplating burr grinders in the use of facial reconstruction.

My story changed. Soon enough, the husband and wife in my story were quite angry with each other. The story got away from me. How do I get the story back? Thanks. Love the show. I'll hang up and listen to your answer.

Or how about this.

I'm working on a novel that has taken me, um, many years to write. I have moved it to the front of my brain and have decided to dedicate myself to working only on this novel until it is done. Then and only then will I get to the other nine dozen ideas I've had in the last month. Is that a good idea? Should I work on all these things at once? Should I take breaks while writing a long book to write little stories? What if I lose the momentum? How do I balance all these ideas? If I can't get this high fantasy idea figured out soon, I worry I'll incorporate a dragon-infested castle into my modern day noir novel. You know, maybe that's not a bad idea. Wait, that's a terrible idea. But maybe I should just try it for a while and see where it takes me. But maybe I'll get lost and all these other ideas for this novel will be cast aside. GAK!

These are very personal problems (heh) with my particular writing at this moment. The only thing that will help me figure these things out will be chatting with my lovely bride, other writer pals, or my agent.

Which brings me to the agent query.

Jay's advice was to write your best work and then send out the query. If that agent doesn't like your work, send to another agent.

That makes sense, but let's look at it another way.

A couple ways you can go about this. There may be more, of course.

The problem with that, I think, is the compulsion to barrage agents. That's a temptation worth resisting. When I didn't have an agent, part of me thought that ANY AGENT would be great, a form of validation. I'd be visiting with an old friend and I could say something like, "That's nice, Mike. Glad your kid passed the spelling test. That reminds me of something my agent and I were talking about last week. What? Oh, yeah. My agent. You know. I didn't mention my literary agent? Yeah. She's in New York. Manhattan. Yeah. Oh, thanks. Sure. Well, yeah, it is kind of a big deal." And so on.

You don't want to do that. You don't want to send your query out to 50 agents at a time. When I talked to Real Authors during my pre-agent days, most of them said, "The only thing worse than not having an agent is having the wrong agent." My initial reaction was that they were trying to sound like Oscar Wilde. Turns out, they were right.

I've blathered on long enough, but I wanted to also mention that following the agent's guidelines for submissions is worth considering. I didn't always do this. I don't suggest that you always do this. If an agent asks for your "First Five Pages" in your novel, you probably don't have to send in your first five pages. Send in the most gripping five. Of course, there's an argument to be made that the first five should be your most gripping. I'm not going to argue against that. All I know is that I had a nice scene later in my book that I used in many queries as my First Five. People liked them, but that wasn't how I opened the book. Honestly, by the time your book reaches the shelves, your first five won't be your first five, anyway.

Jay's correct, of course. Write the best book you can write and then find an agent.

But, from my vantage point, most of us need some tips and advice now and again. I have a few writing books that I go to every so often. I don't follow them blindly. I read a little, then use that to push me forward. Sometimes I'll read the first few pages of a thriller novel just to remind myself that I should be writing. If that schmuck can write, can find the time and energy, why can't I?

So maybe Jeter tells you to just keep your eye on the ball. Maybe Patrick tells you to keep the infield on your left and the wall on your right. And Stringer says to just put your butt in the chair and do it.

Advice from people who have succeeded is great, even if it seems a little removed from where you are right now.

But sometimes you need particular advice from a spouse, friend, agent, or editor.

Sometimes you need someone to tell you to put your damn earbuds in your ears and switch tables.
Posted by Steve Weddle at 8:41 AM