I'm here before you again with a little bit of pimping before I vanish off for the holidays. I have a new ebook out. It's called The Goldfish Heist and Other Stories. It's pretty much a clearing of the vaults of my short fiction up to this point. All of the stories I'm proud of, minus a few stories that other people still have rights on, and it covers a lot of ground. There's humour, noir, violence, mystery, hardboiled fiction and even a Young Adult story ("Mouse's Courage," a story I'm very proud of.)

Originally I'd priced it at 2.99 and that's what I first announced on the twitters. I've had a rethink and decided 1.99 was a fairer price. You're getting a whole chunk of words for that price, and there's something for everyone.

It gets better though. I'm giving it away at Christmas. The price for the book will be 0.00 through the kindle store on the 25th and 26th, so hold off until then and get an even better deal. If you get a kindle as a gift, or are helping someone else set one up, then grab the book while it's free. 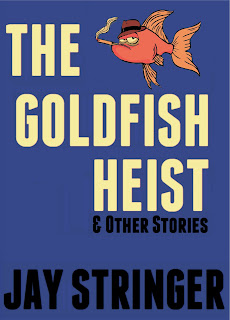 There will be another ebook coming out over the next few days. The creative team behind the Sparrow & Crowe comic book (and the podcast audio drama Wormwood) are putting together a collection of spooky, crazy and scary festive tales. They were daft enough to invite me to take part, and the proceeds will be going to a cool charity.

I'll be saying more about this one from the twitters in the coming days, keep an eye out for that. It'll be great to raise as much as possible for this charity over Christmas.