A plea and a free

When Snubnose Press was started I wanted to be in a position where I could publish a book for no other reason then I liked it, without consideration of it needing to sell X amount of copies.  I wanted to take a chance on titles that otherwise might not get picked up by a traditional publisher.

So when I read a submission that was a 20k word noir poem I just knew that I had to publish it.  To me Nothing Matters by Steve Finbow was the kind of title that exemplified what it meant to be a small publisher.  Most other publishers wouldn't have touched it but we would. For no other reason then because it was good. 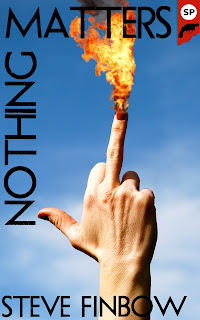 We tried to soften the blow of a 20k word noir poem by including a novella version as well. That way the reader would have a choice. The reality is that, as good as Nothing Matters is, no one is buying it.

Snubnose Press hasn't done a lot of free giveaways but what better way to get someone to try something.  We're giving away Nothing Matters all week.  Just because we want you to have a chance to try it. Because we think that you'll like it if you do.

Written in prose that’s as projective as a hollow-point bullet, Nothing Matters explores the dark side of desire, the surreal side of sex, and the horror that humanity witnesses.

Man and woman. Love and hate. Sex and violence. A road trip to the end of the world. On the way—murder, torture, lust, and despair. Shadowy figures haunt the anti-couple. As does their past... and their present.

From the deserts of Nevada and California to the gargoyle-sentried skyscrapers of New Babylon, X and Z will stop at nothing to be together. But will they kill for it? If you loved Romeo and Juliet, you’ll hate this.

Nothing Matters—a torque song for the 21st century, a torture song. X and Z are at the end of love, the end of language—read their story to find out Y.

If you like...
...experimental poetry
...noir
...lean hardboiled prose
...the above stated editorial philosophy

Please consider trying this book, on us.

David Rachels, the author of Verse Noir had this to say:

Steve Finbow's NOTHING MATTERS asks the remarkable question, Are you tough enough to read poetry? X and his femme fatale Z trade blood- and sex-soaked narratives in noir's first epic poem. And for the faint of heart, there's a prose version, too.

Benoit Lelievre from Deadend Follies had this to say:

NOTHING MATTERS is a great, beautiful and entertaining experiment with the economy of genre. It's like Finbow had boiled a noir text and the essential words came out scattered on the page. The sense, the bigger picture in between the verses is loose, but is there. If you ever doubted that noir had a stylistic essence of its own, read NOTHING MATTERS and think again. I really, really enjoyed this. Read it in two sittings and even dreamed about it. It's a first time it happens for me, for a book.

Here is a brief excerpt of the novella version that we ran at Spinetingler:

“…my bar, a music bar somewhere on the road between LA and Barstow, a stop for truckers, fuckers, and no-luckers. We have booths with personal jukeboxes, a stage for bands and dancers, rockers and strippers, shockers and dippers, the lonely and the never befriended. I bankrolled it through my dead husband’s leavings (he upped and died of shock, the third that never happened)—eventually—after X greased a few cops, threatened the insurance investigators, took a cut, set fire to it, watched my face in the glow of the flames, watched the green turn black, watched the metaphor for exchange turn to ash, watch my lust for him shrivel and die.

The thing is, once he had done what I asked of him, he was no longer necessary. He stayed around until I found something else for him to do, someone else for him to do, somewhere else for him to be. Not here. There. That was always important. I wanted him close but distant. He was distant but close. Proximity is relative. I saw him through the reverse end of an emotional telescope. His proximal philosophy was to share pulses. Gone but not forgotten. Forgotten but not gone. Never anywhere between.

Not long ago, two men came to me with a business proposition—they’d help finance the bar, bring in better-looking girls, more violent dogs, champion roosters, psycho boxers, bring in the crowds, all they wanted was use of the cellar bar for one night a month, no questions asked, no answers given—two faggots with muscles upon muscles. I closed the bar one night a month, gave them access, saw the black garbage bags wet with sticky saliva, the spill of black blood and white powder, the impenetrable eggs, the splashes of dark red urine, the burned women’s clothing, the collection of cheap jewelry scattered in the Sunset Debris dumpsters.

One night, the faggots brought me a present. Straining on its leash, spit running down its jaw, its white teeth glistening, its pink and grey gums trembling, its stub of a tail vibrating. I bent down and scratched its head, its hair short, a strawberry blond and I said,

And one of the faggots says, “Pinker. He’s an American pitbull. You could do with some protection.”

I rubbed the dogs ears and looked into his eyes. He gulped and wagged some more.

“The only thing I need protecting against is myself,” I said.”


And finally here is a book trailer for Nothing Matters.


To get your free copy of Nothing Matters, the kick ass 20k word noir poem by Steve Finbow, go here.


***
Snubnose Press news - We've been steady pumping out the noirboiled books over the last few weeks.  Check out: The Subtle Art of Brutality, Karma Backlash, A Healthy Fear of Man, and our latest book, Captain Cooker by Todd Morr.

Pick one up and give it a try, cheaper then a fast food meal.
Posted by Brian Lindenmuth at 4:00 AM

I would have done, but it's US only. Boo!

Just snagged it. Thanks!

I can't recommend it enough. It's fun, quick and gosh, it's good.

This post is enough to make me want to buy it. If it weren't free, I'd have plopped down my money. As it is, I'll try the noir poem. Give it to me straight-up and raw, thank you.
Anonymous-9