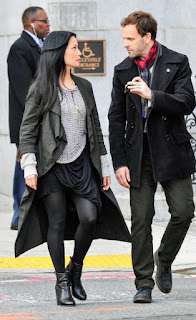 I love Sherlock Holmes. Let's get that out on the table. Ever since I first discovered him back in the early 1980s when I took a paperback of the Adventures and Memoirs on a trip to Alaska, I've fallen under the spell of the famous detective. In these recent years, it's been a great time to be a fan of Mr. Holmes. You have the Robert Downey films (that I enjoy), the excellent novel, The House of Silk, by Foyle's War creator, Anthony Horowitz, the "I Hear of Sherlock Everywhere" podcast, and, most recently, "Sherlock," the excellent revamping of the Holmes and Watson characters in 21st Century London. With Holmsian material being enjoyed by so many, naturally American broadcasters wanted to cash in the action.

Thus, we now have "Elementary," the new series on CBS that debuted this past Thursday. In this one, the detective is played by Jonny Lee Miller, a British actor most famous to us Americans as the man who played the title role in the short-lived, fun show, "Eli Stone." Naturally, with this show's most obvious rival being BBC's "Sherlock," Miller will be compared to Benedict Cumberbatch (and, perhaps to a lesser extent, Robert Downey). He will also find comparisons with Basil Rathbone, Christopher Lee, and my favorite *traditional* Holmes, Jeremy Brett. Rest assured that, in this series, Miller does Holmes well.

I put emphasis on the word "traditional" because that is where fans will diverge. Miller's series is set in New York City. Yes, he's still British, but much of the "usual" things that surround him are different, starting with his partner, Watson. Yes, it's a woman. No, it's not the same. Yes, that's a good thing. To spice things up a bit--and to bring in the female demographic--"Elementary" cast Lucy Liu as Joan Watson, Holmes's "sober companion". The thing that gets these two characters together is Holmes's recent "graduation" from rehab. His parents--alive in this version--hire Watson to basically live with and babysit Holmes for six weeks. Thus, the conceit: she must follow him to his place of business. It just so happens that his place of business is a crime scene.

Now, I know what the traditionalists are going to say: that Watson is a woman changes the fundamental dynamics of the relationship. Of course it does! But that's the point. This is a fresh take on the character in a new surrounding with a new partner. Ah, but the "Sherlock" fans will say the same thing, pointing to their male Watson (the fabulous Martin Freeman), and suggesting that their update is more true to the canon. Of course it is. That's the point of that show: take the canon and bring it up to 2012. The point of "Elementary" is different: put Sherlock Holmes in a typical TV police procedural and see what happens.

I found myself liking many things about the premiere episode. The chemistry is palpable between the two leads, especially as the hour wore on. You've got your standard assessment period where they both try things to test the other. Where Watson, naturally, assumes Holmes is a recovering drug addict, she is slow to realize that his substitute is the case work. Once she does, she sees Holmes in a new light. Where Liu's Watson shares common ground with all her male predecessors is her love of adventure. She quickly sees how the questions posed by the case prove to be a stimulant she didn't know she wanted. You saw that eye nod to Holmes as she notices a clue? She's into it. It's nice to see her choosing to help Holmes in her own, unique medical way.

Of all the little things I liked--the violin music; having the police foil be Gregson rather than the typical Lestrade; Gregson's nod to Columbo with his "one more thing" line; Holmes's near nod to Star Wars with his "wretched hive" line; that the killer doesn't have a monologue like in most every other police show--the one I loved the most is that Miller's Holmes came across as human. In the Doyle books, Holmes is all but a machine, a man who knows he's vastly smarter than anyone else and doesn't really hide the fact. Cumberbatch's Holmes does the same thing, Downey not as much. Miller's Holmes seems almost sad a few points, like when he finds the safe room in which lies the dead body. But as the show goes on and Watson keeps coming back to Holmes's initial deduction about her, she tries to chip away at his truths. It goes on like this until he blurts out the actual truth…but then rapidly tells her that he made up his initial deduction to spare her feelings. I loved this. No, it is not traditional, but it is modern. Now, not every modern thing is good, but I really liked this aspect of Holmes the man. In the books, you get the sense that Holmes does his job because he wants the mental stimulation. In "Elementary," Holmes is actually using his gifts to find the killer and put him away. That's great.

There are things I found odd--beekeeping as an obvious nod to the canon that, in this one episode, seems out of place; the cops discounting the overturned washing machine as an example of cops being dumb; the opera scene as a bit of funny, yet contrived theater--but they pale in comparison to all that they got right or fresh. Think about it: Holmes's parents are alive! Let the fantasy casting begin. Holmes has sex. Holmes had women troubles in London (who's going to bet it's a variation of Irene Adler?). That Holmes gets his clue from watching a bit of professional wrestling on TV in a bar. And that, in the closing moments, the episode ended with the strains of Elvis Costello's "Watching the Detectives," a song I hear each week on PBS's "The History Detectives."

There is way more than I expected that is good about this series after one episode and I'm excited about next week. For me, it's a keeper.

Did anyone else give the show a look? What did y'all think?
Posted by Scott D. Parker at 1:00 AM

I'm open to the show's quirks. I thought I would like the pilot, and I did, but a show's quality can drop, stay level, or improve between its pilot and regular episodes. ELEMENTARY's next few episodes will give me a better sense of the series' flavor and will prove whether it has staying power.

I too enjoyed the pilot and will continue watching for know. I also caught the song "Watching the Detectives," which was icing on the cake.

When I first watched "Sherlock," I loved it and thought Watson could be swapped for Wilson from "House." In "Elementary," I think you could swap Holmes and House. Meaning the character is not quite the Holmes I fell in love with so long ago. BUT, that is not a bad thing. It makes it different enough to be enjoyable in its own right.

Gerald - So true. I'm hoping for the best. Reminds me of CASTLE: started off being a show about a writer and a cop but then gradually focused on Beckett's backstory. Made the show much deeper, but understandably different than season 1.

Anonymous - Never watched House nor the Mentalist, the show my dad thinks is Elementary's cousin. I like the changes and, if I pine for the traditional, fire up Jeremy Brett's episodes. There's room in this world for both. Heck, I even picked up the animated "Sherlock Holmes in the 21st Century" from Half Price Books. I haven't watched it yet but I think Watson there was a robot.

I liked the first ep, and there is absolutely no bias from Watson watching the Mets choke against the Division Winning Cincinnati Reds at the end of the pilot. (Noooo. No bias here.)

Instead, it's a logical spin on the newer Holmes depiction: sort of a dark version of Sheldon Cooper. Downey's is an arrogant savant. Sherlock is actually closer to the book than almost anything set in the original timeframe. Elementary walks a the thin line of taking Sherlock's premise and Americanizing it without imitating it.

It was very well done, but the real test will be how long they can sustain it. I do love that Holmes has gone from this almost marble monument to uber-intelligence to being this slightly off-kilter genius who leaves you feeling like you walked in on the tail-end of a conversation whenever you talk to him.

I liked the first ep, and there is absolutely no bias from Watson watching the Mets choke against the Division Winning Cincinnati Reds at the end of the pilot. (Noooo. No bias here.)

Instead, it's a logical spin on the newer Holmes depiction: sort of a dark version of Sheldon Cooper. Downey's is an arrogant savant. Sherlock is actually closer to the book than almost anything set in the original timeframe. Elementary walks a the thin line of taking Sherlock's premise and Americanizing it without imitating it.

It was very well done, but the real test will be how long they can sustain it. I do love that Holmes has gone from this almost marble monument to uber-intelligence to being this slightly off-kilter genius who leaves you feeling like you walked in on the tail-end of a conversation whenever you talk to him.