Sliding headfirst is the safest way to get to the next base, I think, and the fastest. You don't lose your momentum, and there's one more important reason I slide headfirst, it gets my picture in the paper.

There's a story we've probably talked about at some point.

A professor asks the students how they define themselves. One says she's a fighter. One says he's a learner. This is a creative writing, by the way. So he gets to this one dude who says, "I'm a writer."
Everyone kinda nods, looks down at their cups of coffee, maybe wishing they'd thought of that. The professor says, "OK. It is now 3:15. What have you written today?" The guy says he hasn't written anything that day. The professor says, "And you think you're a writer? Not today you aren't."

I can't be a writer every single day. I've tried. Doesn't work for me. I'd have to get up at 4 a.m. to write. I've done that before. I'm not going to be able to do that every day.

Then you're not a real writer.

You don't want it bad enough!

Um, I think you mean "badly" enough, but whatevs.

I can write 5,000 words a day, but it's a one-and-done kind of thing. Or there will be times when I can crank through 1,000 words a day for a week or so at a stretch. But I don't write every single day. My bank account doesn't depend on it. My sanity doesn't. The happiness of my family doesn't.

I've read posts here and elsewhere about the difference between being an Author and just being a writer. An Author has obligations from contracts to conferences, from agents and editors, and on and on. Page proofs. Revisions. Sequels. Cover approval. (Ha. Joking about the last one.) 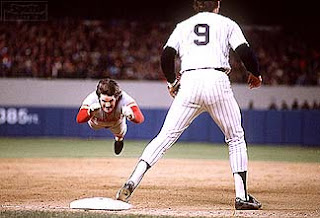 I don't have a clock in my head for writing, and I generally don't have deadlines.

I write what I want, when I want, like that sad, drunk man at the other end of the bar softly singing to himself.

Recently, and for a brief time, that all changed.

I had five stories due in a matter of a couple weeks from each other. Now, I am, by trade, a newspaper guy. Before that, I taught college. Before that, I was a college student. I know from deadlines. If you tell me that something is due at noon on September 23, I will count back from that time. If I owe you a 2,000 word story, I'll figure how long it will take me to write it and how long after that I will need to work on it further -- beta reads, edits, etc.

If you tell me that you'd like a 10,000 word story from me by March 23, there is absolutely no chance that I will think again about that story until March 1, at the earliest.

Of course, when you have five stories due right next to each other, that changes. And that's where momentum comes in.

See, once I write one story, I kinda fall into another. I get the feeling, you know? Get "In the Zone" or whatever. I'll get the idea down, get the sentences shaped the way I like them, get things layered in there, see how the various images work out, and so forth. Maybe "On a Roll" is better than the zone idea. I dunno.

Writing every single day doesn't work for me. Writing in frantic, flailing spurts does.

I have work in Beat to a Pulp: Superhero, Both Barrels, Feeding Kate, Protectors, and Off The Record 2 -- all either out right now or about to be out. (PS - Many, many talented folks involved in these books)

And having that momentum is great. You're writing. Stuff is falling in to place. You're connecting with it all.

But then you're diving into that base, which is an extremely dumb move. Because now I'm kinda just lying here, spent.

The trick to keeping your momentum, I can tell you, is staying on your feet.

My problem is the answer to "What have you written today?" is usually "Two essays for school."

They always told me to take business classes. They never told me it would suck writing time with...

I said pretty much the same thing on Twitter as I'll say here, but I thought it was worthwhile to share in a more "permanent" venue. I wrote a blog post on this very subject not too long ago, but my site is down, so unfortunately I can't share.

Anyway, I figure it this way: writing every day is important, but there are no rules regarding how much writing you have to do. I use 250 words (about one page) as an example. That can be written in a matter of minutes, and over the course of a year adds up to some serious length. It addresses both the need to fit writing into a tight schedule and the desire to have something to show for it in a reasonable amount of time.

I was actually kind of shocked to learn that Stephen King only writes about 600 words a day. I figure it he, who clearly has time in his day to write as much as he wants, prefers to concentrate on writing the best 600 words he can, there's hope for all of us.

This post makes me feel less alone in the universe. Good job Weddle. Since a few weeks, I've been doing the Chris F. Holm method, which is to add something to the WIP everyday, no matter how insignificant. It's not a matter of production, but of keeping momentum as you highlighted. Some nights it's only one sentence, but it keeps it fresh in my mind.

I write in different genres, and each genre requires a different set of muscles, so take this for what it's worth. In my fantasies, I write four days a week (even as a single academic who only has plants to worry about, my brain needs time to reboot so writing everyday is impossible), but more than writing everyday or writing a set amount of words per day, I started paying attention to how to make sure I write (and work on my projects) regularly. I've learned that my essays and articles have their own rhythms and patterns, and that has helped me redefine the idea of momentum.

I try to add something to some story every day. Sometimes it disappears the next day. When I had a job, sick parents, a grandkid to watch, I was equally productive. That kind of upsets me now because I expected to pick up the pace. Maybe I only have so many words in me and it ain't many.

Writing doesn't take up nearly the amount of time for me that research does.