You may have heard about Saving The Pearls, a book about white folks (Pearls) and black folks (Coals) and, uh, something something dystopian. 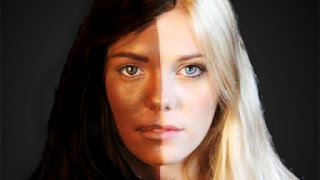 Others have been weighing in on the running and the not-running.

Weird Tales editor has insulted us all

Weird Tales backtracks on support of “ridiculous and offensive” novel

This is how my Monday morning began: with a slap in the face, courtesy of new Weird Tales editor Marvin Kaye

I would like to tell our community that Weird Tales will NOT be running an excerpt from Victoria Foyt’s novel in our upcoming issue.

So many issues to unpack.

The books is YA, but seems targeted to those adults who like to read children's books.

The book benefited from flash and pizzazz, a website unto itself, screens and screens of what looked like praise, etc. WEIRD TALES, the mag, perhaps was duped, a la QR Markham.

And, of course, the use of race. Or the handling or race. (ProTip: Blackface = Not Good.)

Look at all the free coverage the book has gotten? Does that equate to sales? No idea.

But what we have here is a book people are talking about, and I figured maybe now would be a good time to mention how folks are handling race.

Speaking of racism, this week was H.P. Lovecraft's birthday. Some folks point out Lovecraft's racist comments. Some folks say, well, everyone was racist back then in the olden days.

Recently, there was some discussion somewhere (Twitter, Facebook) about whether a racist character in a book is supposed to say racist things. For example, can a "bad" person in a book use the N-word to show that he's a racist? This use of language upsets some folks. For me, personally, I'm not a big fan of racist language in the books I read. (Oh, you don't mind the F-word and the C-word and characters who are murdering child rapers, but if someone says something racist, you get your panties in a wad? Um yeah. I do.) If some character hates someone of another ethnicity, fine. A four-letter word (or six-letter) is so often used as a clumsy short-hand, standing in for what a good author would develop as a character. But racial slurs in books tend to stand out when they're not handled well. The use of a racial slur is unsmooth, drawing attention to the word instead of the story, the character. And, mostly, they're not handled well.

Which kinda brings us around to what the author of PEARLS says she was trying to do, which was turn racism on its head and something, something dystopian. The author has said she wanted to use the Pearls/Coal to get to the environmental implications of the story. Yeah, I don't know, either.

As the links about will tell you, WEIRD TALES has backed off its endorsement of the PEARLS book.

I think there are probably a thousand thoughts you can follow out of this SAVING THE PEARLS mess. If you want to go to it in the comments, grab whatever part you want and let's go.
Posted by Steve Weddle at 3:00 AM

"The use of a racial slur is unsmooth, drawing attention to the word instead of the story, the character. And, mostly, they're not handled well."

Perfectly put! I just watched a movie and saw a filmmaker depict homophobic characters without using any of the more heinous epithets one might expect. It resulted in a more nuanced depiction.

Never heard of the magazine. If this is the kind of shit they print, no fucking wonder.

Yeah, if you want someone to hate a character, it's easy and lazy to have him use the N-word. Racists normally don't, these days, except to get a rise out of people and show that they ain't "skeered" to use it.

And I loathe the "back then everyone was racist" argument. Some brave folks weren't, and this pisses on their memory.

Nick, Weird Tales has been around a long time and this isn't the kind of shit they usually publish. I can think of at least one Stephen King short story they published (it's in the Skeleton's Crew collection but I can't remember which story it is offhand).

This seems a lot like the Spinal Tap scene where they don't understand the difference between "sexy" and "sexist." I guess it really is a fine line between clever and stupid...

What a dumb fucking idea.

I hadn't heard about this book before, but now you've put me in a dilemma, Steve. I never take second-hand reports about anything. I have to see it for myself. So now I have to decide if I want to form my own opinion on this (and I think I do), therefore I'll have to buy it and read it. There's a chance I may deem this author racist, in which case I'll have given money to a bad party. There's another chance that the author is intending to give the country a push toward that much-needed "conversation on race" we've been hearing needs to go on. Guess the onus is on me now to find out.

This week, Beau has a handful of recommendations for your TBR pile