A couple of days ago I had a near-death experience on the freeway. I was driving west on the 91 in Los Angeles County, when a giant dump truck blew a tire in front of me. The thing went off like a bomb, and as debris and swaths of rubber whipped toward me, I thought, "Noooo! I can't die before my novel is published!"  I guess that lets you know where my mind's at these days.

HARD BITE, THE NOVEL is my first full-length noir, and will be published by Blasted Heath this fall. I'm already hand-over-fist on the sequel, since I have a 2-book deal with BH. The time counting down to drop date is so excruciatingly slow I don't think gestating a real human could be this trying. I want to be busy cutting a trailer, but I can't cut a trailer until I have a book cover. I won't have a book cover until JT Lindroos gets around to rendering it. Could I get a cover designed faster from somebody else? You bet, but it wouldn't be a Lindroos cover. He's been in the biz for decades and designs for Edgar award-winning books. So I'll wait for Lindroos, thank you. Even though it's killing me.

Now let's get to the edit.  "Hard Man" and literary badass Allan Guthrie saw something in my manuscript and said he'd get back to me with changes. Allan wears many literary hats. He's not just a principal at Blasted Heath e-publishers, he's also a seasoned literary agent, a crime writer, and an Edgar nominee for his noir thriller KISS HER GOODBYE. Hoo boy was I ready for Allan to have at it! Every word of critique would be burned into my brain for reference and comparison. All my nasty mistakes and misfires were ready to get their butts whooped but good. I was ready to take my crit "like a man" and kill all my darlings, as Falkner said—whatever it took to whip that manuscript into shape.

Finally the day came. I opened the doc.x with Allan's Track Changes notations and... he found about twenty typos. One scene was too abrupt and needed padding. Another scene was briefly queried. That's it. My dreams of a Guthrie-punched manuscript that would forever cast golden guiding light on my career in crime writing fled faster than Chandler at a dry book signing.

Truth is, I pretty much beat my book to death before I sent it out for a second time, after extensive re-plotting and a rewrite.  15,000 words that I loved with all my heart (pronounced dull and boring by beta readers more objective and level-headed than I) were chopped out of the 50,000-word manuscript and replaced with 12,000 words of action and surprise. It took four years, but when it went out, it was ready. I could have self-published a whole year ago but I wouldn't have had JT Lindroos, or Blasted Heath, or Allan Guthrie. I figured the wait was worth it. 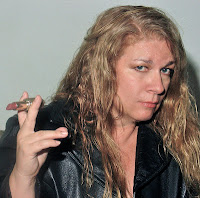 I started writing noir short stories in 2007 and the turning point was winning Spinetingler's Best Short Story on the Web competition in 2009. That encouragement, made possible by Brian Lindenmuth and Sandra Rutton who are guardian angels to crime writers in my opinion, inspired me to arrange life and work around writing. It's been an investment of five years to transform HARD BITE the short story into HARD BITE, THE NOVEL.

As I simmer and stew with the impatience of waiting for five years of work to be realized over at Blasted Heath, I ask myself if I'm willing to invest five more. Will another five years deliver the success and satisfaction I'm dreaming of? Will I ever see any money? I push those questions aside in favor of, "What else would you rather be doing?" And the answer is, "Nothing. I just wish I were writing more."

Conclusion: If what I wish I were doing is what I'm already doing, then the time is well spent. If that dump truck had taken me out on the freeway, then I'd still have steered my life as far as I could in the direction I wanted to go, with the time that I had. That's as much as any writer can do, I think.

Patience is a virtue.

That's all anyone can do, not just a writer. Well said.

Can't wait to read it!

Good points you make, but waiting it hard.