Howdy, peeps. I'm spending Tuesday night with the Mystery Writers of America in Bethesda. I'm in good company as our own Brian and Sandra are supposed to be there, too.

Recent postings on the Short Mystery Fiction Society's Listserv questioned if a "Renaissance of shorts in short fiction" were occurring. And it's perhaps easy to see what prompted that discussion. While the oldest of the digest journals, Ellery Queen's Mystery Magazine, recently celebrated its seventieth anniversary, other journals -- both in print and online -- are sprouting up regularly, and booms in e-publishing have also resulted in a bonanza of short-story collections being no more than a few clicks away.

I'll attempt a short write-up at some point on Wednesday, June 6.

In the meantime, head over to the DSD Group site on GoodReads to vote for our Summer Big Read for our book group. Click here.

I took a picture.

So I think that went well. Brian, Sandra, and I talked about short fiction and answered some questions. I hope they were the sort of answers that were, you know, helpful.

I'll tell you what's weird, though. This was in the basement of the Hyatt in Bethesda. They probably don't call it the basement. Maybe it's The Lowerzinne Level or something. Anyhoo, this is the place with Morton's Hoity-Toity and Steak on the first floor. Last week I sent out "On Submission" a story I'd written about that place. Was weird seeing it again. Like bumping into some jerk you know after you've just pretended to be him and called the county real estate assessment office complaining that your taxes are too low and that the problem with the country is all those damn [whatever is the race of the county assessor].
OK. Maybe not as convoluted as that. But weird.

So it seems short fiction is alive and well, finding homes online and in print. Which is good news, you know, as it's what we do.

Groups like Mystery Writers of America chapters and critique groups and workshops are fantastic for indirect reasons, as well as those direct ones. Sure you maybe get some advice on the story you're writing. But you get to be with like-minded people. You know, in person and stuff.

It's like belonging to a tribe, I guess. And it's damned helpful.

And here's a book some of those folks have just put together -- a fifth volume. Check it.

THIS JOB IS MURDER 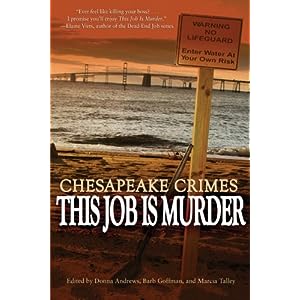 This continues to be a novel-driven field and as such, that's where readers choose to spend their money. I don't see this changing either as more and more authors adopt ebook technology and find out how cost prohibitive short stories really are.

I think they are a great training ground for new writers and experienced writers looking for a new voice and I'm happy there are outlets for readers to find these stories, but let's not get carried away. For every new outlet that opens, one or two usually closes.

There's also the issue of quality control. Many of these new markets springing up are born of sincere desire and good intetions but not necessarily of good skills and high quality.

Yes, it seems that short fiction provides a kind of peer review because almost everyone reading it is also writing it.

Maybe it's like rookie ball up to AA, not very big crowds but almost everyone has to pass through on their way to the bigs.

Bryon, you pretty much summarized my opinion. I think there's more access and ability to read people's work because of the online venue, but even that reading seems to be centered on people in the writing community, as opposed to readers.

The short fiction market and "Renaissance" could explode, if tech-savvy publishers marketed them properly to mobile phones.
Is your e-zine mobile friendly?
Would some pay for an app that delivered stories to their phone? Perhaps.

For sure, Tom. I pay for an app called Storyville and it's very good.

I don't know Tommy, I still think the issue is a lack of a broad readership.

We're insulated to it because we're smack in the middle of it but I think all of the zines and blogs and print journals like Needle all have the same 40-50 readers who are, not coincidentally, the same 40-50 or so contributors. That's great for community but it's not a viable business model.

Interesting -- do you really think there are only 40-50 readers? And they're all writers/publishers, too?

Given that both Kindle and Nook have iOS and Android apps, apps that deliver stories to phones already exist.

Maybe it's 75 but I think that could be stretching it. I don't think that's all the crime readers there out there, but that's my point.

We see all of these new markets popping up and all of these people publishing short stories in those markets and in short story collection ebooks and we say "Hey there's a renaissance in short crime fiction."

But then go to a major mystery convention like Bouchercon where there are 2000 broad mystery fans and how may of them read these markets? If there were a true renaissance in short crime fiction at least half of those attendees not affiliated with the online zines or their community would be reading the zines and that's not the case.

Yes, there are a lot of stories available, so many that what we need is curating.

If Spinetingler put out an app that automatically sent me a new story every week I would pay for it (the Storyville app is $4.99 for six months and I'll probably renew). Some of the stories could even be classics in the public domain, they don't all have to be new.

John, that's great, but you're on the of the 50. You published in Demolition edited by me. You blogged at Do Some Damage. We have a very active and engaged core, but a core alone doesn't mean much if it can't draw in a strong base of casual readers.